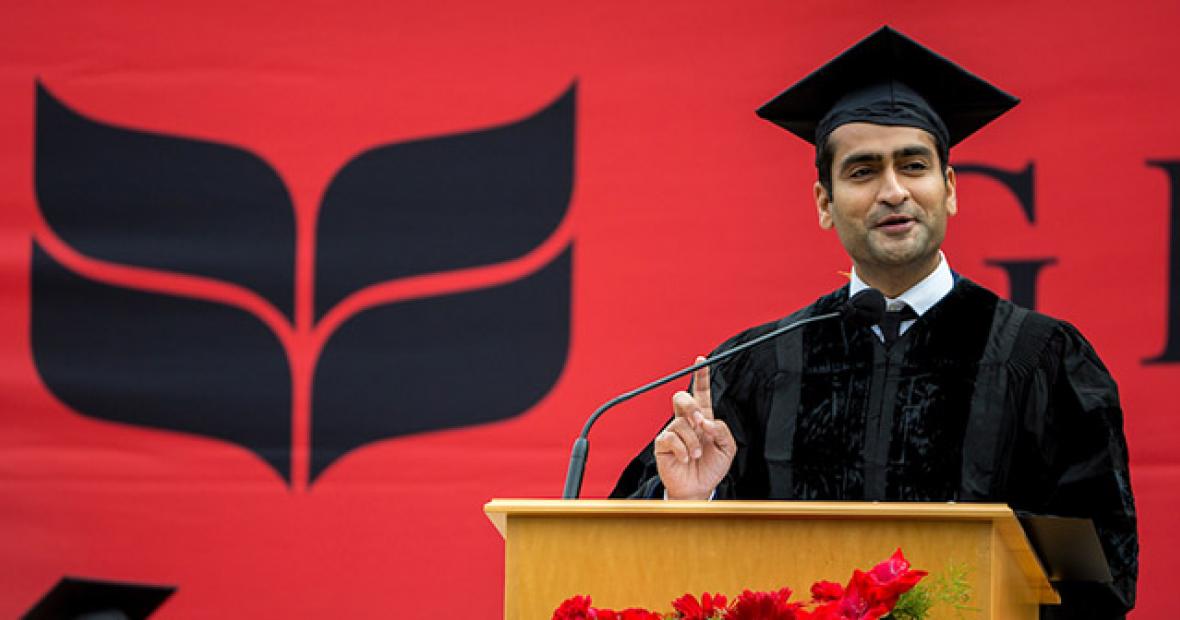 It was a beautiful day for the 171st Commencement of Grinnell College, which began at 10 a.m. on Central Campus on Monday, May 22.

Grinnell College celebrated its class of 2017 at this year’s Exercises of Commencement. The ceremony, in which approximately 400 students received their Bachelor of Arts degree, featured an address by Kumail Nanjiani ’01 and the awarding of honorary degrees.

Join us as we celebrate our newest graduates.

Missed it? Want to rewatch something? Watch the full ceremony or highlights from the day's events:

You can view schedules, maps, and more  with the Grinnell College Events app, available for iPhone and Android devices.

When Variety reviewed the Kumail Nanjiani–penned film, The Big Sick, the reviewer called the film smart, funny, generous and politically savvy. The same adjectives might also be applied to Nanjiani himself, the movie’s lead actor.

Hailing from Karachi, Pakistan, Nanjiani arrived at Grinnell having never seen a single stand-up comedy performance. A friend showed him the Jerry Seinfeld HBO special I’m Telling You for the Last Time, which inspired his interest in the world of comedy.

Moving to Chicago after Grinnell to pursue comic work more seriously, he honed his craft through open mic nights at The Cubby Bear and writing classes at Second City. The work led to his first breakout project, a one-man show called “Unpronounceable.” In it, Nanjiani uses comedy to explore his roots as a Pakistani man and his complicated relationship with America.

In 2013, he released his first hourlong comedy special through Comedy Central, Beta Male. His skills as a comedian and performer have been praised by a range of publications, from The New York Times to Vanity Fair to The Hollywood Reporter.

While Nanjiani has excelled on television, his talents are platform-agnostic. He launched Kumail Nanjiani’s The X-Files Files, a cult-hit podcast dedicated to analyzing every single episode of The X-Files television show. He’s also attracted more than 1 million Twitter followers with his pull-no-punches tweets on politics, immigration, and current events.

Today, Nanjiani is best known as the caustically funny but unlucky-in-love software engineer Dinesh in HBO’s Silicon Valley. This summer, expect his star to rise even further as the Judd Apatow-produced The Big Sick hits theaters nationwide.

The computer science major got his comedic start at Grinnell's Bob's Underground Café.

Grinnell will also confer honorary degrees upon the following:

Barb Van Ersvelde received an honorary Doctor of Humanities. She teaches music in the Grinnell-Newburg school district, using games and activities to help students see how much they already know while pushing them to build on that knowledge. She has also worked closely with Grinnell College students and faculty to implement the Lunchtime Language Learners program, designed to ignite young students’ enthusiasm for other languages.

Emily Pfitsch received an honorary Doctor of Humane Letters. Although she has never held an official position at Grinnell, few have been better ambassadors for the College than Pfitsch has been. After her husband, John, began building his career in Grinnell’s athletics department, she became a Spanish teacher at Grinnell High School, and has helped generations of college students feel like Grinnell is their second home, hosting international students, African-American scholar-athletes and their families, and the annual alumni soccer picnic.

Daniel Werner ’91 received an honorary Doctor of Laws. In the fight against human trafficking, he has been one of the most effective and outspoken voices in the pursuit of justice for victims. After a successful stint as an attorney for farm workers in Florida and New York, he co-founded the Workers’ Rights Law Center of New York. He is senior supervising attorney at the Southern Poverty Law Center, and currently directs the center’s Southeast Immigrant Freedom Initiative. He is perhaps best recognized for spearheading a seven-year labor trafficking lawsuit against a Mississippi-based shipyard operator on behalf of hundreds of pipefitters and welders recruited from India. He is also co-author of Civil Litigation on Behalf of Victims of Human Trafficking.