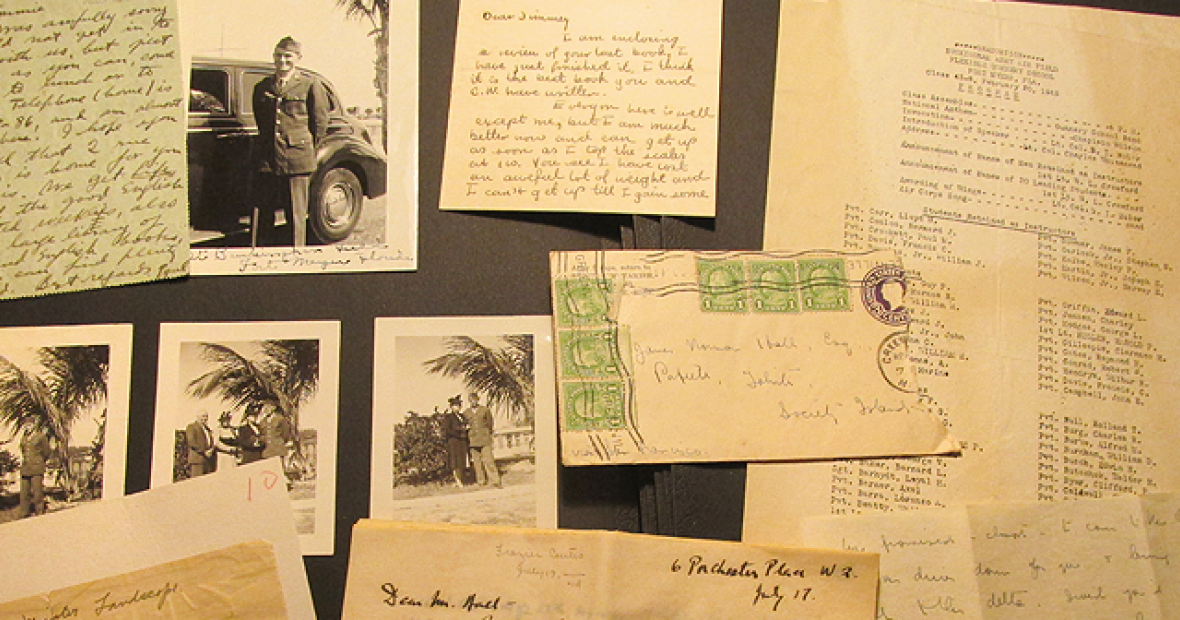 As part of the Center for the Humanities theme “A Century of War: 1914 and Beyond,” the Burling Library exhibition "Letters Home " is on display on the main floor and in Burling Gallery on the lower level. Drawn from Grinnell College’s James Norman Hall Collection and Jimmy Ley Collection, this exhibition offers us an opportunity to see the wars through the eyes of two young Grinnellians as they wrote to friends and family at home.

James Norman Hall 1910 grew up in Colfax, Iowa, and graduated from Grinnell College in 1910.  In the summer of 1914, he traveled to England hoping to pursue his dream of being a writer. When Britain declared war on Germany in August of 1914, Hall enlisted in the 9th Royal Fusiliers, where he was trained as a machine gunner and served in Kitchener’s Army until his discharge in December of 1915. Later, he was sent to France to write about the Escadrille Lafayette, a group of volunteer American airmen serving with the French and decided to join the Lafayette Flying Corps and trained as a pursuit pilot. For his war service, Hall was awarded the Croix de Guerre, five Palms, the Medaille Militaire, the Legion d’Honneur, and the Distinguished Flying Cross.

Hall lived to have a remarkable career as an author.  He published several works about his war experience including Kitchener’s Mob, Flying with Chaucer, and a history of the Lafayette Flying Corps that he co-wrote with Charles Nordhoff. The two men went on to write other works, including Mutiny on the Bounty, Men Against the Sea, and Pitcairn’s Island.  Hall’s autobiography, My Island Home, recalls his life in Colfax, his years at Grinnell, and his war experiences. He died in Tahiti in 1951.

Jimmy Ley ’44 grew up in Lakota, Iowa.  He attended Grinnell College from 1940-1942, when he volunteered for the Army Air Force and sent eventually deployed to England as a flight engineer.  On his twenty-fifth combat mission, the final one before he was due to return home, Jimmy Ley and his crew were shot down over the English Channel. For many years, he was listed as missing in action. Finally in 1949, Jimmy Ley’s body was found in a small cemetery in Groffliers, France, and returned to his family for burial. Jimmy Ley was highly decorated for his bravery during the war, and was awarded with the Distinguished Flying Cross, the Air Medal with three Oak Clusters, and the Purple Heart.

Diane Lenertz ’15 who curated this exhibition, says that by diving into the first-hand accounts of two Grinnell men who fought in World War I and II, she was able to gain a better personal understanding of how war impacts individual lives.

We are grateful to Nancy Hall Rutgers and the late Conrad Hall for the donation of their father’s papers and to Jimmy Ley’s family, who recently donated this collection to the College.