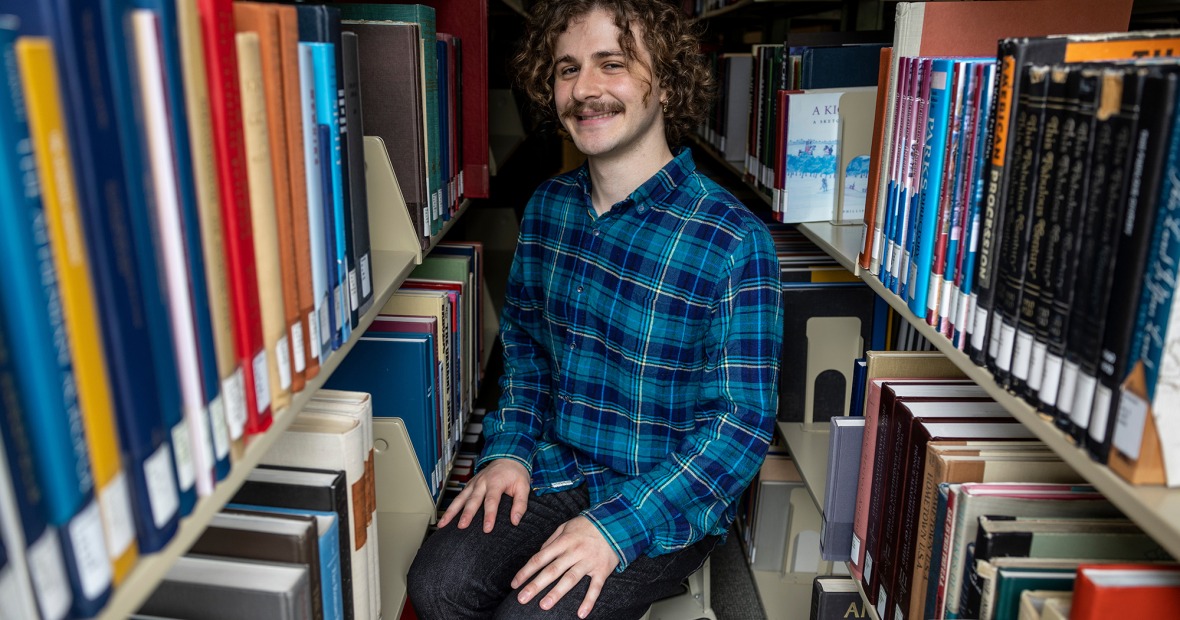 Rosenbloom is excited about his plans to study abroad in Kyrgyzstan.

When Daniel Rosenbloom ’23 chose the subject of his Mentored Advanced Project (MAP), he didn’t realize he was about to become linguistics detective, searching for clues to unlock the secrets of an 80-year-old text on the Avar language.

Rosenbloom’s MAP, titled Russian-English Translation of Russian-language Linguistic Studies, reflects his interest in languages and politics. With guidance from his adviser, Professor of Russian Todd Armstrong, Rosenbloom set out to translate a book on the linguistics of the Avar language, which is spoken in the remote Russian republic of Dagestan. The book was available only in Russian.

As a Russian and political science double major with a concentration in linguistics, Rosenbloom was well-equipped to do the translation. But Avar is very different than Russian.

“Which is weird, because it’s spoken within the borders of Russia,” he explains. The Caucasus Mountain region of Russia is linguistically diverse; Dagestan is home to many languages unrelated to Russian and often unrelated to each other.

I like working hard. I think most people at Grinnell can relate to this.

“Even though it’s such a tiny region, it’s so mountainous and hard to traverse that there’s an incredible amount of linguistic diversity there that I think is super interesting,” Rosenbloom says.

The book, Syntax of the Avar Language, was written by a native Russian speaker just before World War II. The author, who died in the siege of Leningrad in 1941, translated Avar into Russian sentence by sentence — missing a lot of the nuance in the process.

The task Rosenbloom had set for himself turned out to be a lot more complicated than he had imagined. First, he must break up the Avar sentences. Then he looks at the individual parts of the words to finally home in on their meaning.

Did we mention that Rosenbloom doesn’t speak Avar?

To further complicate the task, the resources are limited. Avar-to-Russian dictionaries are available, but they “kind of work and kind of don’t,” Rosenbloom says. He found a Polish website that allows him to enter a word in Avar; the site then searches the entire corpus of the language. If he’s lucky, he can learn which part of speech the word is, and perhaps the definition (in Polish, of course).

But he can put together these clues to deduce the root of the word, which he can then look up to finally reveal its meaning.

“When I do break up the whole sentence and decipher all the parts of it, I feel so good,” Rosenbloom says. “The only problem is it doesn’t happen all the time.”

He’s now focusing on the first two chapters rather than the entire book. “There’s almost an infinite amount of work that could be done,” Rosenbloom says.

With his interest in politics, Rosenbloom is also working on a paper that explores the colonial imperial context of the book. Although it’s apolitical for the most part, the fact that the author speaks Russian, the language of the dominant culture, provides interesting fodder for consideration. “I am making the argument that it reflects some kind of colonial context,” Rosenbloom says.

At the end of a hard day of work, Rosenbloom says, his head is often spinning. “But in a really good way that’s stimulating and exciting,” he says. “I like working hard. I think most people at Grinnell can relate to this.”

Next semester, he will be studying abroad in Kyrgyzstan. And he’s applying for a Fulbright English teaching assistantship in Uzbekistan. After that, Rosenbloom plans to apply to graduate school in comparative politics, focusing on the Caucasus and Central Asia.

Dagestan is near Chechnya, which is considered one of the most dangerous regions of Russia. That doesn’t stop Rosenbloom from wanting to see it for himself. “I think the Caucasus region in Central Asia is just super, super interesting, so I really want to go there.”