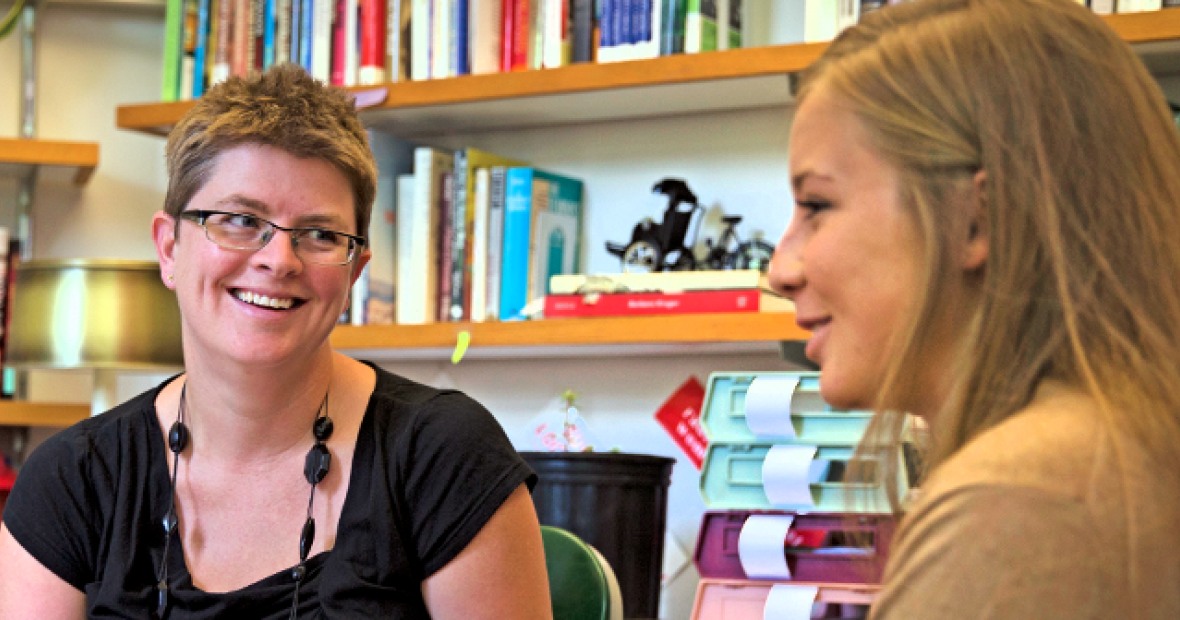 “Are we preparing kids to do what they want to do?” asks Keven Seney, principal of Grinnell Community High School (GHS).

Grinnell College students are helping to answer that question with the guidance of Audrey Devine-Eller, assistant professor of sociology.

Since spring 2013, Devine-Eller and her students have been working on a long-term, service-learning research project embedded in her Sociology of Education course. They’ve also received help from two other sociology professors and their students in Methods of Empirical Investigation.

The question at the core of all this work is whether GHS is doing a good job of preparing students for either college or careers.

Seney says, “The data we’ve collected quantifies what we already know anecdotally — success begets success. We want to validate what we’re doing well, but we also want to uncover what we’re not doing well.”

How financial need plays a role

Devine-Eller is particularly interested in “how average kids, regular kids, figure out what they’re going to do after high school. This is a big problem,” she says, “because the United States has this ‘college is for all’ rhetoric, but college is increasingly class stratified.”

As a GHS grad herself, Maile Leathem-Rietz ’17 has provided some context for the data. For example, “how much financial need affects the GHS students’ postgrad plans. They decide whether or not to go to college based on whether they can pay for it,” she says.

“It’s interesting to see trends in the data, even though they’re expected,” Leathem-Rietz says. For example, surveyed students who didn’t take an Advanced Placement, college, or dual-credit course didn’t plan to attend a four-year college. “Where’s the causation?” she asks.

Devine-Eller says, “A collaborative project like this is an excellent opportunity for sociology students to apply their classroom learning and see real results in their community.”

Her students determined who to study — the Grinnell High School class of 2014. They coded data from high school student transcripts, input the data and did some preliminary analysis, then fielded an interest survey of the whole GHS class of 2014. After conducting interviews with 25 high school seniors, they transcribed some interviews and wrote case-study final reports.

In June, Devine-Eller interviewed several 2014 GHS graduates who’d indicated they had no plans beyond high school.

Next steps in the project

This fall, Devine-Eller’s students will put together all the project data and prepare a follow-up with the 2014 GHS graduates to find out how they’re doing a year later.

Additionally, two students will conduct Mentored Advanced Projects (MAPs) with Devine-Eller. One will examine the impact of friendship networks for post-secondary planning. Another will look at the influence of Grinnell College on this small community.

“What will make the difference?” Seney asks. “Counseling? Coursework?” He hopes this project will yield insight about these students. “I want every student to have postsecondary plans,” he says.