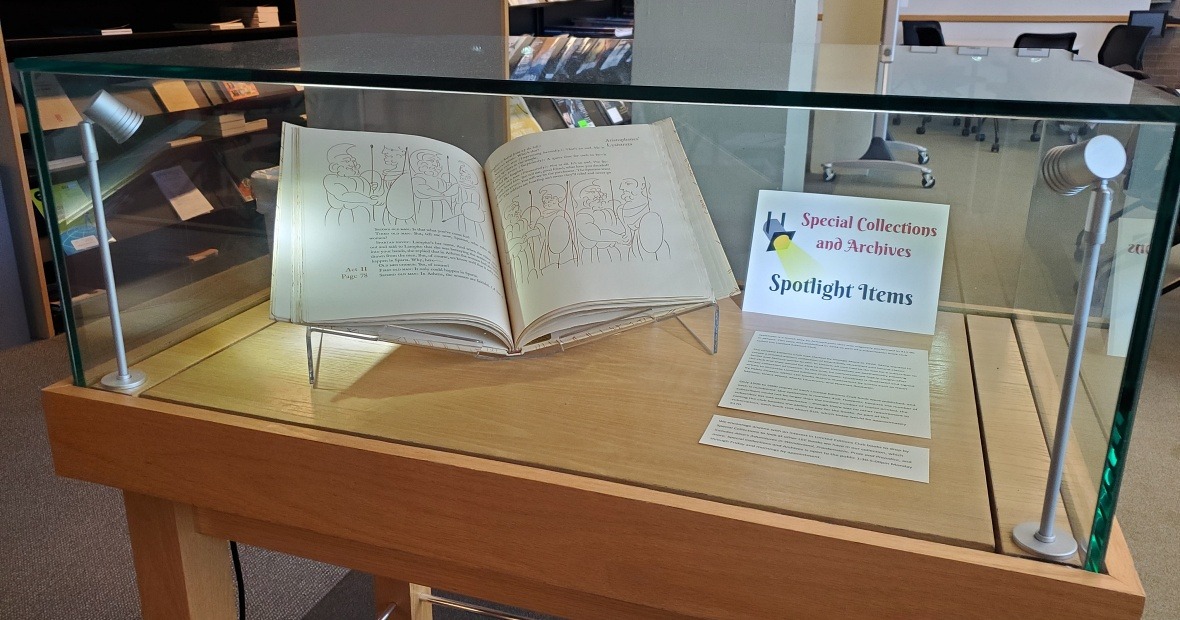 Check out the new Spotlight Item in Burling Lounge! On display now is a Limited Editions Club copy of Lysistrata, a Greek play by Aristophanes.

Lysistrata was originally performed in 411 BC in Athens. This was published in 1934 as part of a subscription book club called the Limited Editions Club.

The Limited Editions Club was started by George Macy in 1929. Macy wanted to create a limited-edition collection of beautifully illustrated and bound classic books and literary works to sell. In theory, all one had to do was be a subscriber to the club and they would be able to build themselves an aesthetically pleasing library collection of classics. To this end, he commissioned highly sought-after artists to illustrate Limited Editions Club books. Lysistrata is illustrated and signed by Pablo Picasso. Other LEC books feature illustrations by artists such as Henri Matisse, Grant Wood, Marie Laurencin, and Norman Rockwell.

Only 1500 to 2000 copies of each Limited Editions Club book were published, and each is numbered. Our Lysistrata is number 416. However, because the number of subscribers could not be larger than the limited number of copies printed, the subscriber list was quite exclusive — though there was no other requirement to joining the club besides the ability to pay for the books. As part of this subscription, each book cost about $10, which today would be approximately $170.

We encourage anyone with an interest in Limited Editions Club books to drop by Special Collections to look at other LEC books we have in our collection, which includes Alice’s Adventures in Wonderland, Frankenstein, Pride and Prejudice, and more.

This display was curated by Special Collections and Archives student Maddi Shinall '23.