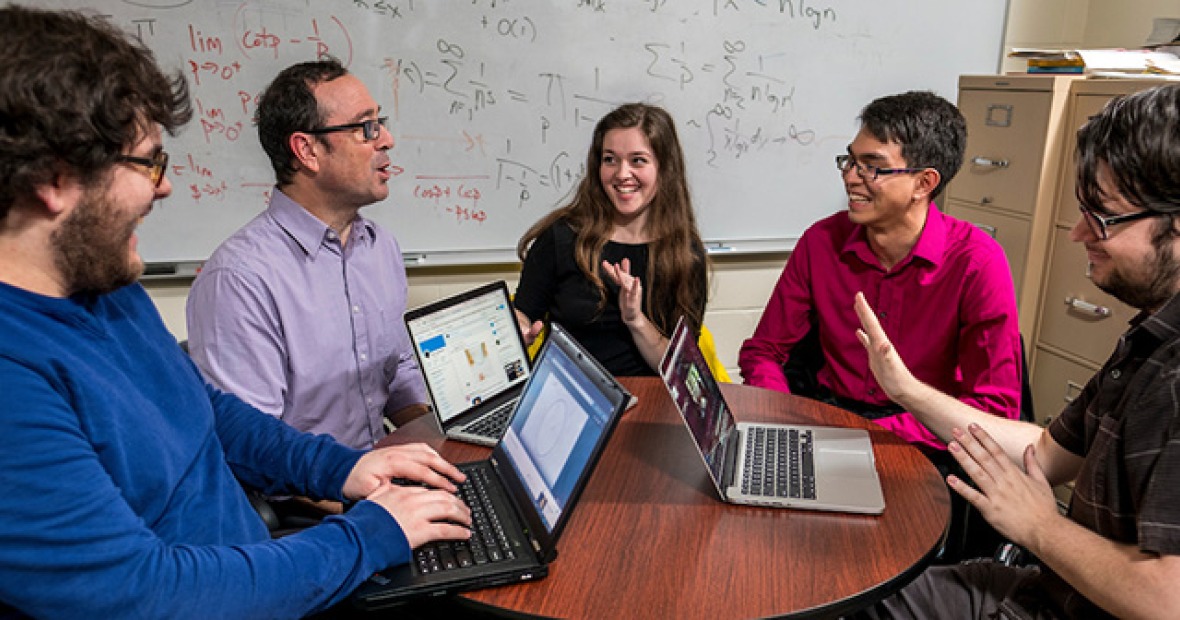 It’s 4 p.m. on a Monday and four students arrive on time to Marc Chamberland’s office, ready for their weekly meeting. The team makes videos for “Tipping Point Math” on YouTube — and they get paid to do it.

Chamberland, professor of mathematics, created the YouTube channel in 2014 to make math more accessible to a general audience. He keeps the math at about a high school level. His largest audiences, however, are in the 18–25 and the 25–35 age ranges, which surprises him. As of fall 2017, he has more than 52,000 subscribers and more than 7 million views.

In 2016 Chamberland won a Grinnell College Innovation Fund grant that allows him to hire students to help create the videos. The students are either summer research assistants doing a Mentored Advanced Project or student employees during the school year. “It’s an opportunity to practice multimedia communication skills,” he says.

Chamberland comes up with the math concept for each video, writes some of the scripts, and records the narration. His team of students works on scripts, storyboarding, and visuals, including finding or shooting still images, finding or creating brief animations, and shooting some short video clips.

Today Libby Farrell ’19 is in the hot seat as project manager for a video about the chain rule. She feels a little nervous since it’s her time getting feedback from the whole group — Zac Brennan ’20, Zachary Segall ’18, Zachary Susag ’19, and Chamberland.

“So Libby's going to show us what she has for the chain rule,” Chamberland says.

“Are we going to do a full run-through and then commentary?” asks Segall.

“What do you think is more helpful?” Chamberland says.

“Right,” Chamberland says, “so let's just watch the whole thing and control yourself, including me, from blurting out, and then we'll go back through it.”

Farrell opens her laptop and everyone gathers behind her to watch the video.

“So what’s the chain rule?” asks the narrator. “To be clear, don't confuse it with a chainsaw, chainsmokers, chain reactions, a chain-link fence, chain restaurants, chain-breaking body builders, or chain mail, though it didn't help Stannis very much. Rather, the chain rule has to do with calculus.”

With each type of chain mentioned, a new image shows on screen. Stannis, a character from Game of Thrones, is shown wearing chain mail.

“I’m making an attempt to be hip,” Chamberland jokes about the GoT reference. He adds, “I didn’t know until Libby told me that [the Chainsmokers] is a group.”

Chamberland had originally intended the chain smokers to refer to people who smoke a lot.

“It sounds like the music they use on a homework hotline,” Farrell says, “but it's not bad.” Choosing the music is part of her job as project manager on this video.

Chamberland wants to watch the video again. “If you see something, just say ‘stop’ and make your comment.” He says, “Stop” when the narrator says “the chain rule has to do with calculus.” He’s distracted by the image of a tangent line and slope. “I look and I’m like, ‘Whoa, what is integral calculus doing in this thing about the chain rule?’”

“So what should I put there to symbolize calculus?” Libby asks.

Farrell tries once more to explain her choice of visual. “I feel like people would still be like, ‘Oh, this is calculus.’ But if we think it’s easier …”

“Yeah, I’m being picky,” Chamberland says. “It's like if you said, ‘We're talking about gorillas,’ and then you put up a picture of invertebrates.”

“No, no,” Brennan says, “it’s like we're talking about household pets and the video is primarily about cats. Then we say, ‘But some people don't like household pets,’ but we showed a picture of a dog to represent household pets.”

Susag shakes his head. “This is all getting confusing.”

They decide to leave the image alone for now.

Chamberland and the student team talk through the whole video. They comment about the math content, the audio, the visuals, what their audience already knows about calculus, what might be confusing, etc. The discussion is thorough and detailed.

Farrell takes notes about what changes to make, what things to experiment with, what emails to send to Chamberland to remind him of his tasks.

A few days later, Farrell says, “It was a little overwhelming to have four people’s critiques all at once, compared to during the summer where it was just Zac [Brennan], Marc, and I, but it was also good to have new perspectives from the other Zachs. The video was definitely better off having been thoroughly reviewed, and we were able to publish a great final product.”

You can check out their final product.

For the whole team, the experience of working on scripts and making videos allows them to practice their written and visual communications skills. And, of course, learn a lot of math.