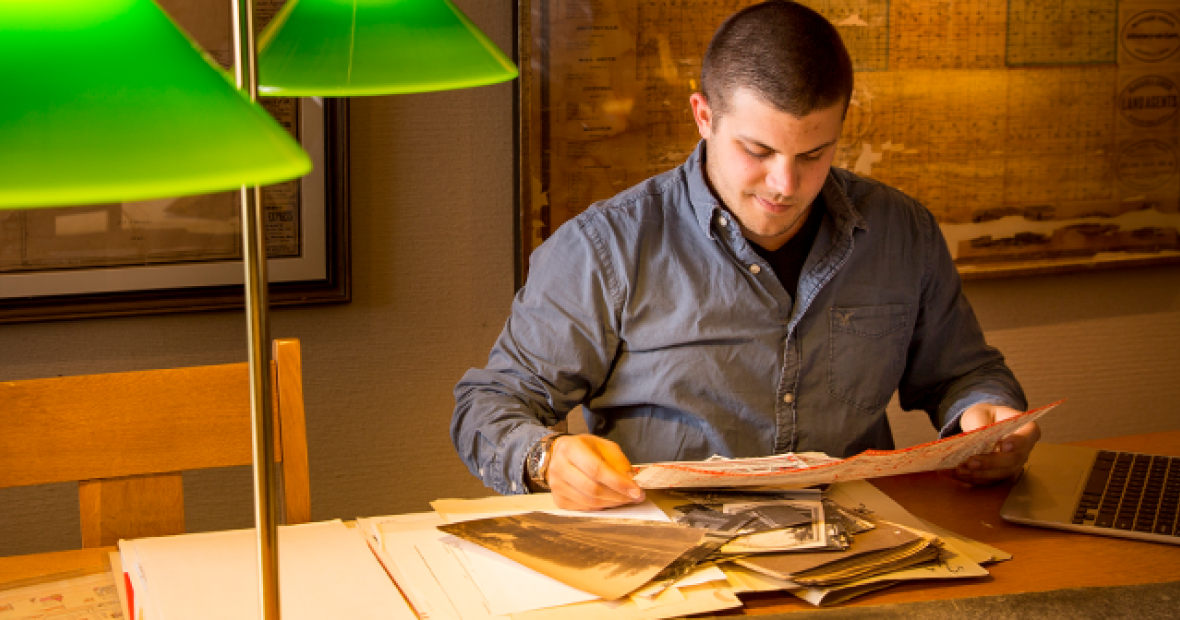 College campuses are constantly changing, but students only see a brief window of this change. A building might be the centerpiece of an institution, but a few years after it has been razed, it resides largely in the minds of alumni and in the College’s archives.

Eric Mistry ’14 is not willing to let the memories of campus past rest. Instead, he created an app for iOS and Android that makes Grinnell’s campus history accessible to all.

Mistry’s Mentored Advanced Project (MAP) uses images, maps, and information from the College’s archives to paint a picture of Grinnell’s campus over time.

The app offers both a guided tour of the current campus and a historical tour in which sites of former buildings are superimposed on an aerial view of the College, courtesy of Google Maps.

Initially, Mistry planned to make an e-book documenting the College from 1996 — when the last official history ends — to the present. Instead, he decided to more fully embrace the emerging field of digital humanities. Digital humanities applies computer science to humanities subjects. Instead of writing a paper or an e-book, Mistry created an interactive experience.

Prior to undertaking this project, Mistry took a design course as part of his technology studies concentration, but the history major had no experience building mobile apps. With online lessons from Codeacademy and some assistance from members of the Grinnell AppDev team who lived down the hall, Mistry was able to create an app on Intel’s XDK platform.

At the same time as Mistry was using online resources to teach himself how to build mobile apps, he was searching through the card catalog in the basement of Burling Library. Although he acknowledged the irony of relying on an analog resource for this digital project, he admitted that electronic searches lacked a crucial ability: serendipity. “I would search through these boxes I found with the card catalog search,” he said, “and find things I never would have thought to look up.”

Mistry prefers to be on the border of analog and digital, old and new, drawing from both to create something better than either. Referencing a long since demolished campus building that he fixated on during this project, he said, “We weren’t able to save Blair Hall, and we probably won’t be able to build anything like it again. I love it when you can improve on something that’s already there and when you can get something that looks old but works like it’s new.”

He’s taken that philosophy beyond the digital, too. Mistry, a hall wellness coordinator, was a member of the the board of directors for the new wellness lounge in the Joe Rosenfield ’25 Center. The project improved an existing space, which now functions at a new, higher level.

For more information about Mistry and his mobile app, visit his blog.