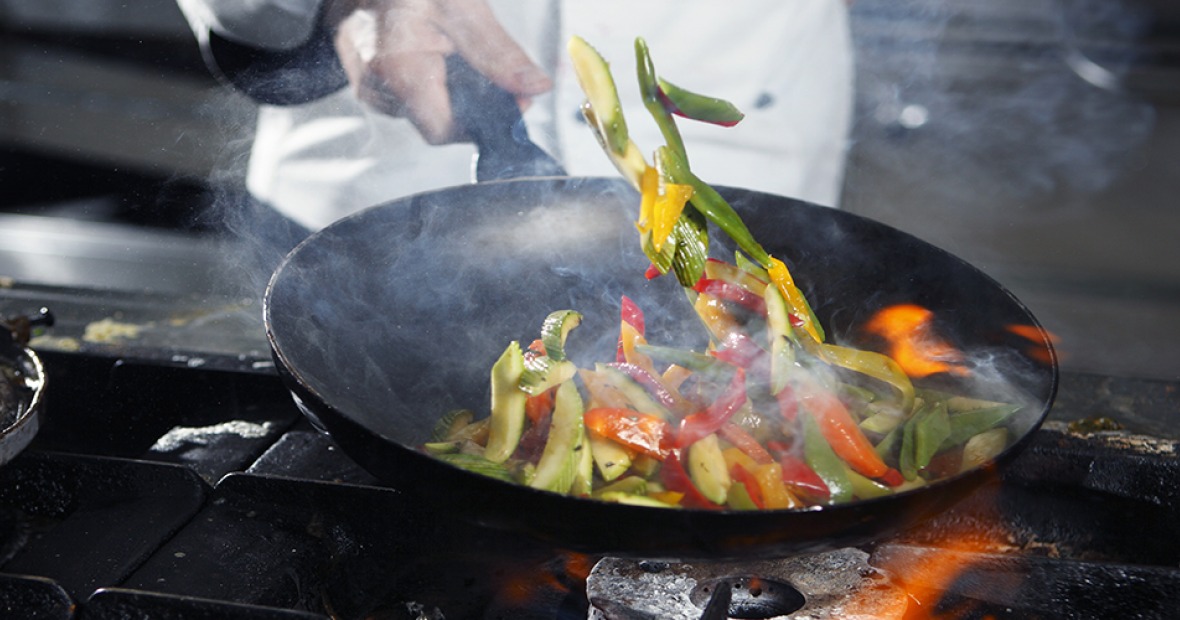 Trying new foods in a new cultural environment can be a nerve-wracking experience. Because he was raised vegetarian, Saketan Anand ’21 was “very, very worried” about the Dining Hall before he arrived at Grinnell. However, these concerns never materialized.

To meet the needs of Grinnell’s globally diverse student body, the D-Hall offers many different food stations, including halal and vegan. The chefs enjoy trying new recipes that students share with them in order to bring a taste of home to the students’ second home in Grinnell.

Anand, an economics and Spanish major from Mumbai, India, says he was blown away by the variety of food options available in D-Hall when he arrived on campus. “Especially when I first came here, this was kind of a dream for an international student. It’s weird because pizzas and sandwiches and burgers and that kind of stuff is like luxury food in the cultures that we grow up in. It’s kind of like a dream to get to eat this kind of food pretty much every day,” he says. “So, you have that honeymoon phase, and then you’re like, ‘Okay, I want to get healthy food.’ But there are options for that as well. It’s really easy to put together a salad bowl and stuff.”

Regarding vegetarian-friendly D-Hall offerings, Anand says, “Soups are really good if you’re a vegetarian. There’s always a vegetarian or vegan soup. And then for my veggies and proteins, I’ll pick up the garbanzo beans, but I also like to do the Pasta [Bar] and the Stir Fry very often … Pizza is good, fries are good; pretty much everything except for the Honor G Grill, you can bet that you’ll have vegetarian options, which is amazing.” Anand says he occasionally eats chicken as well, which has diversified his culinary options.

“In the 3 years that I’ve been here, I think they’ve really improved in terms of the variety of food that they offer. I think that’s been really nice to see, especially as an international student,” he says. He is currently on the 15-meals-per-week plan plus dining dollars and is “pretty much dependent” on the D-Hall and Spencer Grill for meals.

“I would say like 3 to 4 meals a week I’ll either make something in my room or have a granola bar or go to Chuong [Garden, a local Chinese restaurant] or something, but I pretty much use my 15 meals fully and then I fill in the gaps at the grill.”

D-Hall Hacks for Meals and Snacks

Anand also shared his personal recipe for improvised garlic bread: “You take the toast, or you take whatever bread that’s by the soup, and you either add olives or peppers, or whatever, and some spices and garlic, and then you put it in the oven and toast it lightly.”

He enjoys adding spices from the spice rack to his morning eggs and lunchtime pasta. He also advocates for adding Cajun seasoning and seasoning salt to french fries.

“I make chai sometimes,” he adds. “I’ll fill a cup with three-fourths hot water, add some creamer and add chai [spice]. And that’s, like, pretty close to legit chai, which is nice.”

Check out daily menus in the Marketplace Dining Hall through NetNutrition.