No Room for Error

How four Grinnellians joined together to make furniture from campus trees 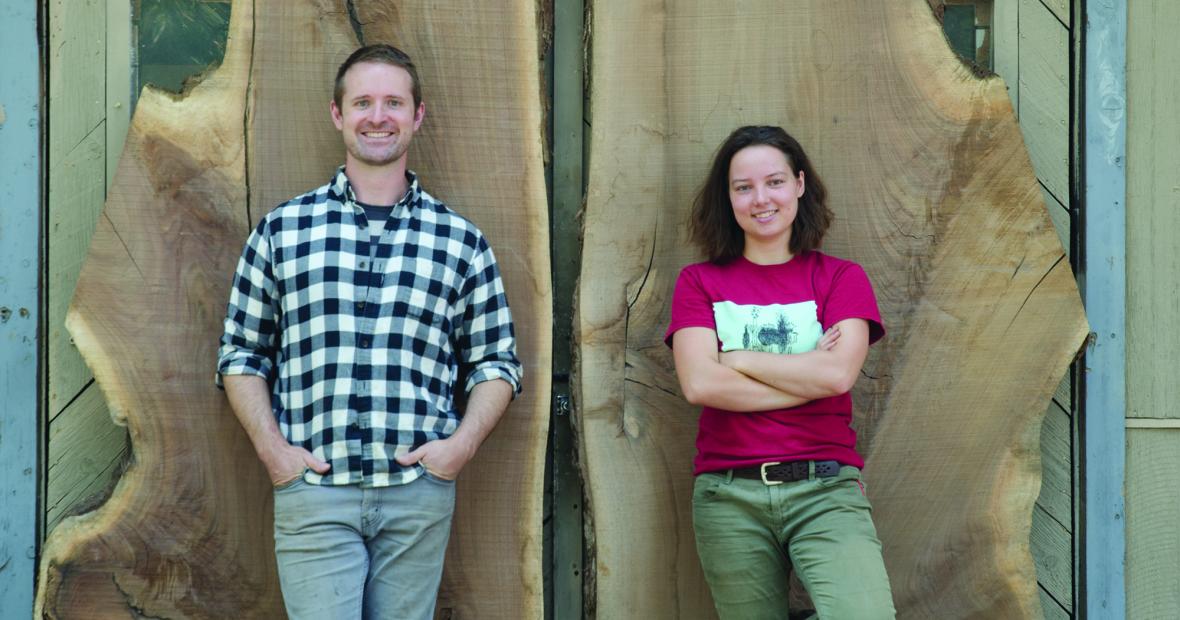 Tor Erickson ’01 and Isabella Kugel ’20 stand in front of wood slabs that were made into a desk that now greets visitors in the new Admission and Student Financial Services center.

From flowering crabapples to sycamores, birches, and firs, the trees dotting Grinnell’s campus have served as familiar landmarks — as well as beloved spots to climb, make art, and meet for class — for generations of Grinnell students.

So when 31 trees between Alumni Recitation Hall (ARH), Carnegie Hall, and the Robert N. Noyce ’49 Science Center were scheduled for removal to make way for new construction, campus sustainability coordinator Chris Bair ’96 came up with a plan to preserve them.

A third-generation Grinnell graduate, he didn’t want the trees to be fed into a chipper and turned into mulch or used for lumber by someone with no connection to the College. “They seemed like a resource worth celebrating and keeping on campus for another 100 years in another form,” he explains.

The first thing that came to mind: Use those trees to make furniture for the new buildings on campus.

Bair’s idea resulted in an internship in the summer of 2018 that brought together California-based furniture maker Tor Erickson ’01 and a current student, Isabella Kugel ’20, to build a desk that now greets visitors in the new Admissions and Student Financial Services  (ASFS) building, which opened in November at Eighth Avenue and Park Street.

Bair’s official title is environmental and safety coordinator, and he’s involved in anything green on campus, from recycling and energy efficiency to renewable resources. To get the project started, the Office of Development and Alumni Relations searched for Grinnellians who are skilled woodworkers. They found a half dozen. Bair pitched the idea of using campus wood for furniture to the architects designing the ASFS and the Humanities and Social Studies Center (HSSC). Designers, alumni woodworkers, architects, and Bair brainstormed and came up with several pieces — including benches, the reception desk, and a logo — that would go into the two buildings.

Kugel is an independent major with a focus on agronomy and economic ethnobotany. She’s worked with Bair on recycling, composting, and other sustainability projects, so when she found out about the campus trees idea, she emailed Erickson. The two then set up the summer internship at Erickson Woodworking, outside tiny Nevada City, California.

“We really wanted to use this wood to tell Grinnell’s story,” explains Bair. “Tor decided to come to Grinnell, then he used his carpentry skills for service after graduation (Erickson was a volunteer on a Rotary grant, teaching carpentry skills in Africa). The idea of taking campus wood and having it used by an alum who did Grinnell-type service to build a desk, then place it in the admissions building, is a neat story. And getting a current student involved brings it full circle.” 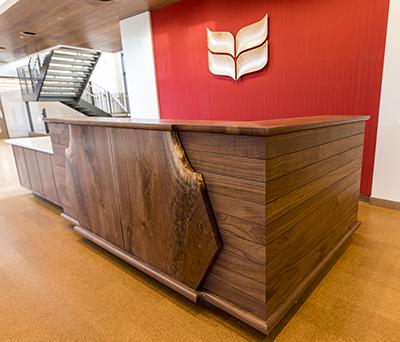 Designed by Erickson, the desk is 14 feet wide and 5 feet deep, made from black walnut that came from three 80-year-old trees that stood just north of ARH. “It’s really exceptionally beautiful material, with incredibly rich and even-colored grain,” says Erickson.

Erickson also made a 4-foot-wide Grinnell laurel leaf logo with curled edges that hangs above the desk. That wood came from a maple that grew near the old campus bookstore that was once located on the east side of Carnegie.

About a dozen of the 31 campus trees taken down — mostly maple, sycamore, and walnut — were large enough to be processed for lumber. Some of them were brought to a nearby farm in Grinnell for milling, then transported back to campus and stacked and stored. The trees that were too big for local milling were hauled to an Amish-operated sawmill in southern Iowa, then brought back to Grinnell. Some trees were too small for lumber but perfect for other uses, including spoon carving during a one-day workshop sponsored by the Center for Prairie Studies in early 2017.

From the wood that was stacked and stored, Bair, Kugel, and Erickson (remotely), picked out hundreds of board feet of lumber for the desk — about 2,600 pounds of wood — that was then driven across the country to Erickson’s shop last summer via semitrailer.

Both Kugel and Erickson come from woodworking backgrounds. Erickson’s parents founded Erickson Woodworking in the early 1970s and he grew up learning the craft. A history major at Grinnell, he traveled, built houses, and taught after graduation, then returned to California in 2007 to work with his father in the former gold mining town where he was raised. He’s since become a partner in the company. Erickson, his parents Robert Erickson and Liese Greensfelder, and one employee make and sell just 75 pieces of furniture a year, primarily chairs (rocking, dining, and office) and tables that for the most part come from trees harvested in California. 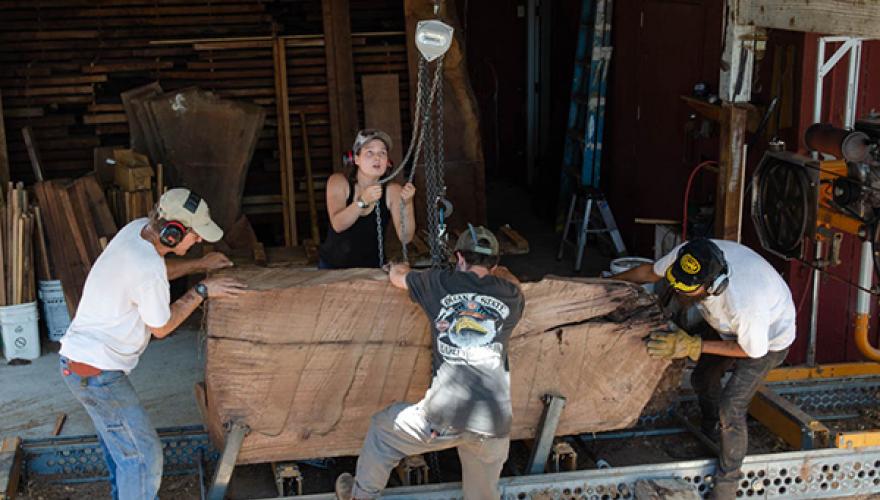 Kugel’s father has a custom wood cabinetry business outside Milwaukee; and like Erickson, she spent a number of summers working in her father’s shop. But the Erickson shop is “a very different school of woodworking,” Kugel explains. “Chair-making is different than cabinetmaking — they (the Ericksons) work with so many more angles. They do a lot of bending of wood and cutting shapes.”

Along with an intern from the Rhode Island School of Design, Kugel worked with Tor and Robert Erickson and a shop employee each day during her internship, focusing most of her time on the campus desk. She also helped build a rocking chair and designed and built two sawhorses from local sugar pine.

She also processed the walnut wood slabs for the desk, cutting them into usable pieces, then running them through the jointer (which flattens and straightens the lumber), the planer (making it all the same thickness), and the table saw (to cut the correct width).

“All the wood pieces had to be absolutely precise when we were building the desk,” says Kugel, who at night slept in a tent pitched on a pine platform outside the shop. “We measured to five-thousandths of an inch, so every time you milled down a piece, you had to be ever so precise on how much wood you’re taking off because there’s no room for error.”

Once the pieces were processed, they were sanded in one batch so there was a consistent pattern to them. That pattern is especially obvious in the two raw-edged, walnut slabs that mirror one another on the front of the desk that visitors see as they walk in to the admission building.

One of the coolest parts of the internship, Kugel says, was a trip she and the Ericksons took to Zamora, California, about 75 miles from their shop, to mill lumber at a local sawmill. “I’d never experienced wood that way before. There were massive logs and we made lumber out of them. I’m used to ordering wood that comes prepackaged as beautiful, perfect boards. We were there for two days milling that lumber, working on a giant saw machine, debarking the wood, and using a huge winch to lift a 1-ton piece of wood.”

Anthropology professor Jon Andelson ’70, who initially connected Bair and Kugel and is director of Grinnell’s Center for Prairie Studies, finds the campus wood project especially appealing. Both Kugel and Erickson have taken classes with him (he’s one of Kugel’s advisers), and Chris Bair is a member of the Center for Prairie Studies Advisory Board.

“There are so many connections in this project,” Andelson says. “It connects Chris and Tor to current students, it connects California to Iowa, it connects us to the natural world around us, it connects our heads and our hands, and it connects something old that was living until recently with something brand new being built today.”

In addition, says Andelson, “Prairie studies has been sponsoring the Prairie Artisan Series (where the spoon-carving workshop began), and the mantra for that is ‘add a little hand knowledge to your head knowledge.’ There are very few ways connected to the College that Grinnell students can gain some knowledge of manual skills. I think it’s neat to have Tor as an alumnus making his living with both his hands and his head, and I can see Bella [Kugel] doing that in the future, too.”

For his part, Bair says, “I’m tickled pink that we’re having stuff made out of this wood. Trees are taken down all the time and they’re a resource. In 50 years if we don’t want that desk anymore, it can easily be repurposed.”

And the campus wood has even more life ahead of it: Pioneer Bookshop is selling pens, letter openers, bowls, and cutting boards all made from campus wood. Bair wants to get some of the wood into the hands of alumni for woodworking workshops during Reunion, and Tor Erickson is working with Andelson to plan another summer internship for a Grinnell student at his shop.

For Kugel, who spent this past fall semester in rural Italy studying sustainable agriculture, the internship was incredibly rewarding. “We’re taught about networking — that you’re supposed to find alumni who are passionate about what they do — and that’s what happened,” she says. “I made this awesome alumni connection with Tor and felt like I could contribute my skills and knowledge. At the same time I was learning new skills and knowledge, all while having a lasting impact on Grinnell.

“That really mattered to me,” she says. “To have an impact.”