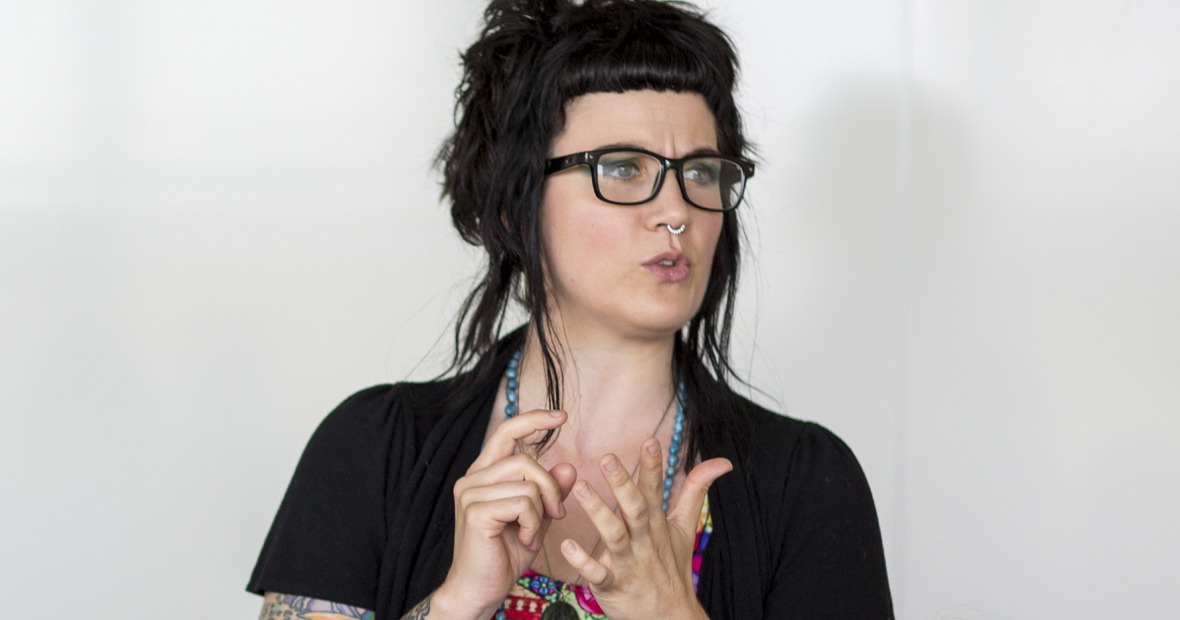 When professors pilot a new course, they do not typically expect it to become the most popular class on campus that semester. But when Jennifer Snook, assistant professor of sociology, introduced a course on American paganisms, its 25 seats filled immediately — and nearly 45 additional students expressed interest in joining the class.

Under the guidance of Snook, students investigated how various paganisms reflect and intersect with the broader political, religious, and social landscape in the United States and around the world. In the process, they shed their preconceptions, deepened their knowledge of paganism, and emerged with a nuanced understanding of a growing religious tradition that is often misunderstood.

Grounded In Theory, Empowered By Exploration

In Snook’s class, students engaged in Skype sessions with pagans from around the world. They hosted a kindred of Heathens — who practice a form of paganism rooted in pre-Christian, Northern European traditions — at Grinnell over Halloween weekend, and participated in a ritual to honor the darkness and coming winter. They road-tripped with their classmates and professor to a pagan retreat in Oklahoma.

“The idea is to make Grinnell College one of the hubs of pagan studies,” Snook says. “Not just from a theoretical perspective, but also from a practice perspective, with speakers on campus and course-embedded travel. It’s important to create opportunities for students to learn from Pagans, instead of just reading about them.”

Of course, students must develop a solid grounding in academic theory for experiential learning to stick. “If you’re going to talk about why black pagans are practicing a paganism dominated by white people, you have to talk about blackness and religiosity. You have to look at Karl Marx and talk about oppression and resistance,” Snook says. “My students got some theoretical training that they didn’t know they were going to get!”

When the Wintermoot Is Your Classroom

On an early morning in November, Snook and eight students piled into a van and headed to the Midwest Wintermoot, an annual pagan retreat held at a state park in Pawhuska, Oklahoma.

Though none of the students identified as pagan, they were eager to engage with the Heathens, Wiccans, and others who had gathered for the event. Over the course of the weekend, they attended workshops on 13th-century weaving, learned how to play Hnefltafl (a sort of Viking chess), and participated in rituals when appropriate. During downtime, students helped out with chores or struck up conversations with other attendees.

For Toby Baratta ’17, the most meaningful moment of the Wintermoot occurred at High Sumbel, a sacred pagan ceremony involving toasts and gifts to the gods. The Grinnellian group was toasted twice.

“They thanked us for being open-minded, for coming and experiencing their community, for wanting to learn more rather than dismissing them. It was really emotional and empowering,” Baratta says.

Like the course itself, interest in the Wintermoot exceeded available slots. Although only eight students (chosen by lottery) got to go to Oklahoma, Snook set up a Facebook group so that the entire class could participate. Students attending the Wintermoot posted photos and videos throughout the weekend, and debriefed the class upon their return to Grinnell.

A Microcosm of Society

Reflecting on the semester, Snook hopes that her students gained an appreciation for paganism as a site of academic inquiry. “I kept telling my students, ‘Nobody cares about pagans! We’re not doing this because they’re cute. What is sociologically powerful about this?’”

Hannah Boggess ’18, a gender, women’s and sexuality studies major, was particularly excited to learn about the traditions of environmentalism and feminism that figure prominently within certain paganisms.

“Growing up in Arkansas, I only experienced the ways in which conservative Christianity is involved in social movements,” she says. “It was eye-opening for me to learn that religion can also be a deeply progressive place.”

But as Boggess deepened her exploration, surveying the literature and scouring pagan chat boards, she encountered ugly strains of racism, sexism, and transphobia, too. “There’s this duality of being both really inclusive and empowering, but also having elements that are exclusionary and limiting,” she says. “That makes for some interesting negotiations.”

Baratta agrees. “The more I learned about pagans, the harder it became to put them in a box. Some pagans are nature-loving progressives; others are white nationalists,” she says.

“One of the things I got out of this class was that it really normalized paganism, rather than portraying it as this odd, occult thing,” Baratta continues. “Paganism is like a microcosm of society: although pagans’ religious beliefs lie outside the mainstream, their values and lived experiences run the gambit, just like anybody else’s.”