A Passion for Ideas 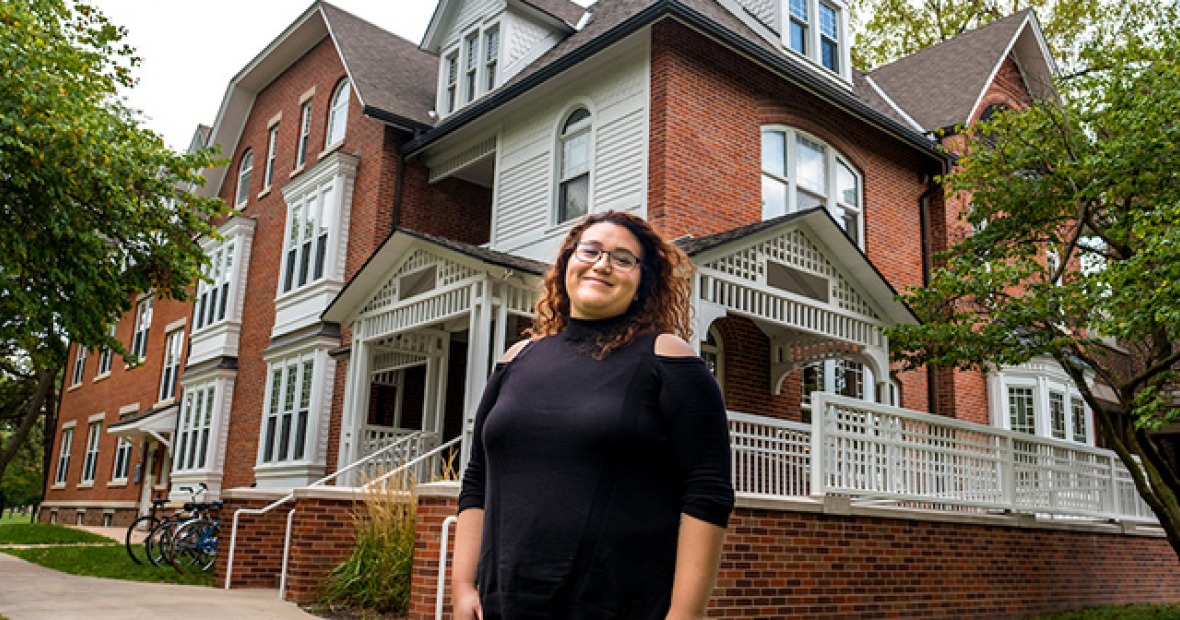 One day after class in 2009, Michelle Nasser, then a professor of Spanish at Grinnell College, pulled Lizeth Gutierrez ’12 aside. Nasser was determined to convince Gutierrez to apply for Grinnell’s Mellon Mays Undergraduate Fellowship (MMUF). While Nasser could nudge Gutierrez, she couldn’t simply nominate her — Gutierrez had to make the application herself. “Look,” Nasser recalls telling Gutierrez, “you need to apply for [MMUF] because it’s going to be your saving grace, it’s going to be everything you need.”

Nasser, a former MMUF fellow herself, saw exactly the network and resources Gutierrez needed to thrive. Gutierrez, a second-year Spanish major struggling to find her voice in academia, saw a fellowship whose sole purpose was to prepare her for a career she had never dreamed of considering.

“At first she said she wasn’t going to apply because she didn’t think she could get it, and then she said, ‘If I do get it, I’m not going to be a professor. I’m not cut out for it,’” says Nasser. Nasser, however, recognized what she describes as a “thirst” in Gutierrez, a passion for ideas, that the program was fine-tuned to cultivate. Nasser persisted, and the persistence paid off — Gutierrez applied.

Nasser recognized not only Gutierrez’s passion and drive, but also a possible solution. This is a key example of what MMUF is trying to achieve.

MMUF: Why It Exists and How It Works

Grinnell joined MMUF in 2009, and receives funding from the The Andrew W. Mellon Foundation to support an average of five fellows per year. Launched in 1988, MMUF’s mission is to diversify the professoriate by providing students from backgrounds underrepresented in academia with a set of tools — including strong mentors, financial support, and research and time management skills — that can be harder to access for those who feel like outsiders in the academic sphere.

To accomplish this goal, MMUF takes a multi-faceted approach. At its center is the two-year research project. Fellows design and implement this project with a faculty mentor, to explore whether research is something they’d like to pursue as a career. MMUF provides travel funds and a research allowance, and fellows get the chance to present their research to their peers.

The research project alone, however, is not what makes MMUF a “saving grace” for students like Gutierrez. Crucially, the program also fosters close relationships between MMUF fellows through local and regional meetings. By the time they graduate, students feel supported by an extensive and close-knit network of peers and mentors with common experiences and common goals. These relationships often extend far past the fellows’ undergraduate years. Fellows also receive student loan debt forgiveness up to $5,000 upon enrolling in graduate school in an eligible field of study, with an additional $5,000 granted upon completion, as an incentive to go on to further study.

“Professor Nasser is not the first person who interacted with [Gutierrez] in a classroom setting,” says Shanna Benjamin, associate professor of English and faculty coordinator for the Grinnell MMUF program, “but she was the one who pulled her aside and said ‘I see something in you.’”

Gutierrez was one of six students selected to Grinnell’s second cohort of Mellon Mays fellows. In fall 2010, she attended Grinnell’s second-ever MMUF kickoff dinner. New fellows were introduced to the resources and opportunities at their disposal. The keynote speaker told them that they, too, could go on to get their PhDs and become professors. While such words were inspiring, Gutierrez remained skeptical that a career in the professoriate was truly in her future.

Unlocking a Passion for Research

Then, Gutierrez began her research. “I realized that, this is fun, and that this is something I actually enjoyed doing,” says Gutierrez. Under the guidance of Nasser, the natural choice for her faculty mentor, Gutierrez crafted a project exploring the racialized exploitation and exotification of Latina bodies in the media.

Without the Mellon program, Gutierrez might never have had the opportunity to discover her love of research. “The great thing about [MMUF] is that it provides financial support, so that you don’t have to do work study,” she says. Time that would have been spent helping to pay for school was instead dedicated to participating in MAPs, summer research at Macalester College, and developing a writing accountability system and time management strategy with her MMUF cohort.

Nasser’s conviction that Gutierrez was grad school material had only grown stronger with time. “I had to write her recommendation letters and say, ‘[Gutierrez] has had to overcome, and that’s why her GPA is not so strong,’” Nasser recalls. “‘But she’s going to be the best student you’ll ever have.’”

Graduate School and Beyond

In 2017 Gutierrez graduated from Washington State University with a PhD in American studies. The first Grinnell Mellon Mays fellow to complete a graduate degree, she accomplished the feat just five years after leaving Grinnell.

Since graduating, she has returned to the liberal arts — this time as a postdoctoral fellow at Macalester College. She studies how chisme (roughly translated as “gossip”) between Mexican women working in the domestic industry in the United States functions as a tool of survival, helping them navigate their economic conditions and negotiate their rights.

She’s also begun mentoring students of her own.

Gutierrez “became the kind of professor who can make space for people like her,” says Benjamin. “And considering the future of higher education, which is increasingly diverse, professors like Lizeth will be necessary to cultivate a sense of belonging among a diverse student body on the campuses of America’s colleges and universities.”

In September 2017, Benjamin invited Gutierrez to the Mellon Mays kickoff dinner, this time as the keynote speaker. Gutierrez told the new fellows that they, too, could thrive — not just survive — in academia, if they love research, if they are passionate, and if they are driven — those very same traits that Nasser saw in Gutierrez not long ago. Maybe they don’t believe her yet. But thanks to MMUF, they have a good chance of proving themselves wrong.