From the Peace Corps to the Pentagon, Students Explore International Affairs Over Break

The Rosenfield Program brings students out of the classroom to delve into international affairs in Washington, D.C., as part of the College’s globally informed, inquiry-led curriculum. 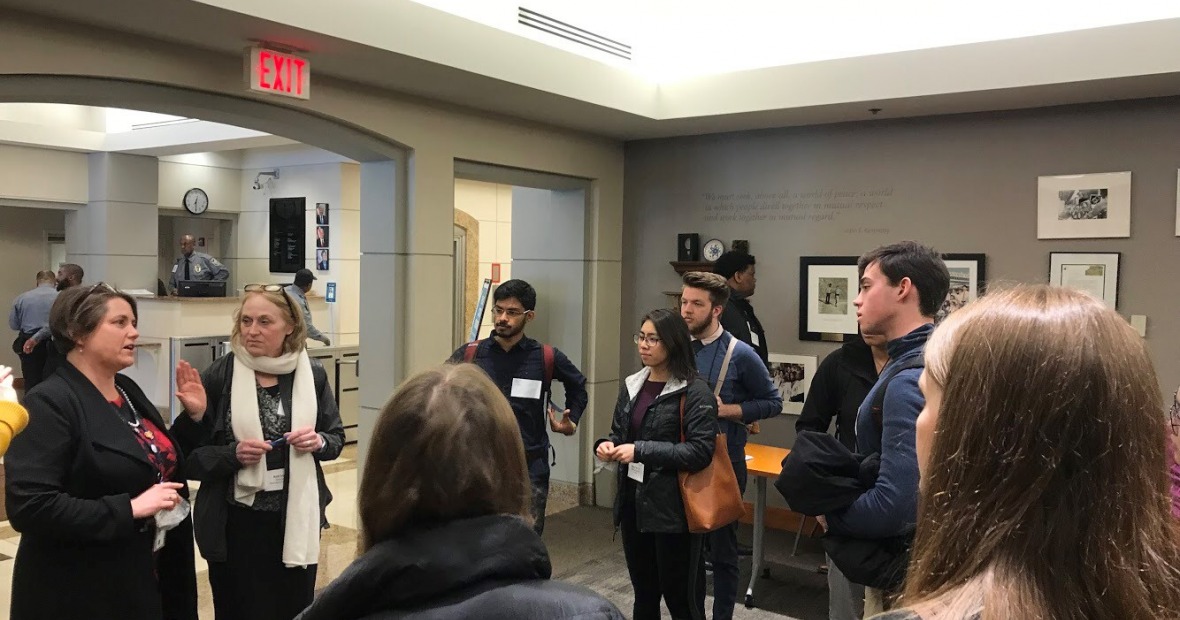 Kate Rohrbuagh ’91 (left) welcomes the group to the headquarters of the Peace Corps.

Sixteen students devoted a week of spring break to learning about international affairs outside of the classroom during the International Affairs Study Tour in Washington, D.C.

The tour provided students with opportunities to hear firsthand from alumni and other professionals in the field about a wide array of topics, including international diplomacy, trade, development aid, defense, arms control, and media.

The Rosenfield Program in Public Affairs, International Relations, and Human Rights organized the tour in partnership with Maureen Fitzgibbon, director of the Government and Social Service Community at the Center for Careers, Life, and Service.

“I’ll speak for everyone on the tour,” Trish continues, “saying that we all have a much deeper understanding of the international affairs ecosystem that marks Washington, D.C., and an appreciation for the work our alumni do in the interest of public service, not to mention what it’s like on the ground [from the subway to the corridors of power] in the nation’s capital.”

The study tour turned out to be an ideal spring break activity for April Park ’19, a political science major from Suwon-Si, South Korea.

“Many of the alums emphasized skill transferability and utilization of already-acquired skills to go beyond our comfort zone,” Park says. “As much as I have heard this over my four years at Grinnell, the repeated emphasis made me appreciate once again all the experiences and opportunities I’ve been fortunate to have at Grinnell.

“As a senior with only six weeks till graduation, this trip left me with both relief and inspiration,” she adds. “The trip reaffirmed that even though it is completely acceptable to feel lost, anxious, and ambiguous about my post-graduation future, there are inspiring connections of people to reach out to who are approachable and willing to listen, and help you in one way or another.”

The first stop on the tour was the U.S. Government Accountability Office, an independent, nonpartisan agency that serves as Congress’ watchdog. Other highlights of the tour included discussions with:

“What I saw in D.C. is directly translatable to my experiences and perceptions from Grinnell,” says Reece Downey ’21, a political science major from Indianola, Iowa. “Reading a New York Times article may now resonate with me in a different tone, now that I’ve had the chance to transcribe personalized quotes from David Sanger.”

Downey also says he’s still reflecting on the whirlwind tour: “The study tour taught me a week’s worth of lessons that I am still working through and digesting. As well as exploring Washington itself, connecting with the vast D.C. alumni network gave me glimpses into a future role that I could pursue in representing both Grinnell and my country in a fulfilling and honorable manner.”