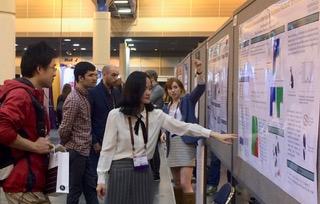 Yue Yu and Jill Rix presented the published work at the national meeting of the American Physical Society, March 2017 in New Orleans, LA.

Grinnell physics majors Jill Rix ’20, Yue Yu ’17, and Sam Ross ‘16 have published the results of their 2015 and 2016 summer Mentored Advanced Projects in Physical Review E, the flagship journal of the American Physical Society.

Working with Barbara Breen, assistant professor of physics, the students successfully harvested wind energy from a flapping flag to enhance the detection of weak signals in an elegant tabletop experiment.

Ross and Yu worked with Breen for their Mentored Advanced Projects (MAPs) in the summer of 2015, developing the experiment through computer simulations and experimental prototypes. Using their results and proposals, Rix built the final version of the experiment working with Breen in summer 2016.

Energy harvesting is an exciting research area that aims to extract clean, free energy from ambient sources to power small electronic devices. A classic example is a crystal radio receiver powered by the received radio waves.

In their small-scale experiment, the students harvested the noise from the fluttering of a flag to amplify weak periodic signals detected via the movement of an inverted pendulum. They used stochastic resonance, a remarkable phenomenon where the addition of random noise counter-intuitively amplifies weak signals.

“Unlike earlier mechanical stochastic resonance experiments, where noise was added via electrically driven vibrations, our broad-spectrum noise source is a single flapping flag,” Breen explained. “Although noise is usually considered a nuisance in engineering, in our device the noisy fluttering of a flag in a breeze enables us to detect otherwise unnoticeable vibrational signals.”

The ubiquity of wind and the simplicity and broad frequency response of flapping flags suggest the potential for diverse applications.

In the Physical Review E article, Breen and her students collaborated with John Lindner, The Moore Professor of Astronomy at The College of Wooster. Committed to providing research experience for undergraduates, Breen and Lindner hope to continue this project by building smaller wind-powered stochastic resonance experiments that can operate at higher frequencies and be coupled into arrays.

Ross is currently pursuing a master's in civil/environmental engineering at Iowa State University.

Yu is pursuing a doctorate in applied physics at Cornell University.

Rix is pursuing her physics degree at Grinnell. Rix’s work was supported by a grant to Grinnell College from the Howard Hughes Medical Institute through the Precollege and Undergraduate Science Education Program.
Tagged as