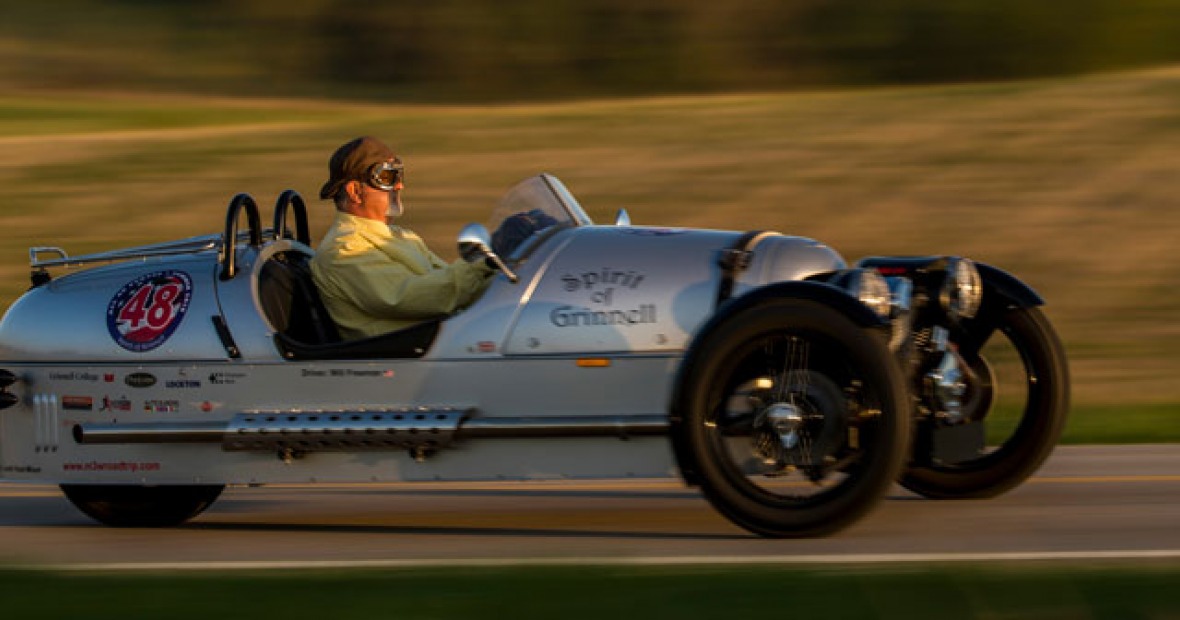 Professor Will Freeman will launch an 18,000-mile summer journey through all 48 contiguous states in a Morgan 3 Wheeler following commencement ceremonies at Grinnell College on Monday, May 21, 2018.

His purpose? To rediscover the power of the road trip and how it influences people in the tradition of John Steinbeck’s Travels with Charley, Jack Keroauc’s On the Road, and William Least Heat-Moon’s Blue Highways.

Throughout the trip, Freeman, 63, will take photos and collect stories of life journeys from individuals, including Grinnell alumni, he meets along his way. The photos and stories will form the basis of his new book, which will also explore the monuments, national parks, and historical and spiritual sites he encounters during the trip. He will post photos and an account of each day on his blog.

In an earlier book, The Quest, Freeman chronicled a cross-country motorcycle trip he made with his 12-year-old son. “I don’t know what I’m going to find out there this time,” said Freeman, associate professor of physical education and head men’s track and field and cross country coach at Grinnell College. “That’s the best part.”

He expects to cover about 230 miles a day in the 2017 Morgan 3 Wheeler, which was built by hand at the Morgan Motor Co. in Malvern, England, and purchased at Europe Motors in in Birmingham, Mississippi. He believes the unusual vehicle, dubbed the “Spirit of Grinnell,” will help attract people for him to interview and photograph. He’s taking every replacement part he can fit in the vehicle, along with five gallons of gas and a barrel of water.

Freeman committed to what he calls the “ultimate summer road trip” as part of a new course titled The Power of the American Journey, which he co-taught last fall with Kesho Scott, associate professor of sociology.

"Will Freeman, my colleague and friend, is taking a ride of a lifetime for all of us who love the natural beauty of our country and the idea of getting to know Americans face-to face,” Scott said. “The tradition of ‘the road trip’ on foot, bike or car is as American as it gets. I applaud him and applaud our students for the hard work they put into creating the itinerary and an interactive road map for this trip."

In the first half of the course, students analyzed the travel experiences of others and reflected on their own life journeys. The second half was devoted to researching and mapping Freeman’s journey into 48 states along two-lane highways, avoiding chain hotels and food and emphasizing historic places, unique places, landmarks, and national parks.

His route will take him straight south from Grinnell, Iowa, then west through desert areas, up the coast, and across the top of the United States. From there, he will travel into the northeast, down the East Coast to Key West, Florida, and back through southeastern states to Iowa by mid-August.