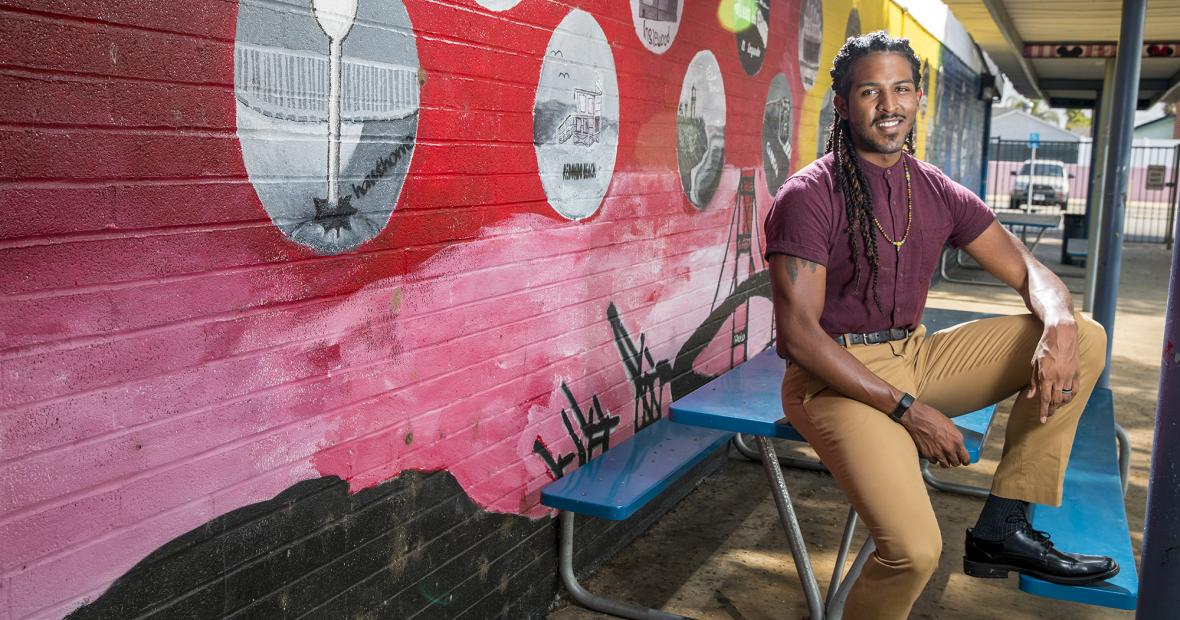 Erin Whalen’s pursuit of educational equity drives the high energy and enthusiasm he brings to his work each day as assistant principal at RISE High, a project-based charter high school in Los Angeles.  Whalen ’12 realized that as a black, Hispanic, indigenous male, his educational experience was a rarity; and he became passionate about creating experiences for other youth in marginalized communities.

Whalen attended a progressive pre-K–9 school in his native LA before graduating from Santa Monica’s New Roads High School. A Posse Scholar at Grinnell, he graduated with a degree in anthropology and joined Teach for America to teach middle school English in Miami before returning home to teach in a charter school in Los Angeles.

These experiences, plus off-campus study in Cape Town, South Africa, confirmed Whalen’s stated desire to work for those who seek educational equity and justice.

RISE, which stands for Revolutionary Individual Student Experience, was designed to meet the needs of students who have experienced housing instability or foster care, or for students who have found that the traditional school model simply didn’t meet their needs. Students come to RISE through referrals from social service agencies and community partnerships.

“These are kids who often miss school to go to court or to meet with their social worker. RISE High meets students where they are, bringing educational equity and justice to them, with resources available on site,” Whalen explains.

RISE High has two sites, one in south-central Los Angeles located with social service agency A Place Called Home, which is, Whalen says, “aligned in mindset and ability to engage with students. Small environments are important to kids who have been through trauma and need to feel safe.”

Last year’s pilot served 30 students, and this year there are48 students at the south-central LA location (which has capacity for 120) and 43 at the Hawthorne, Calif., location (with capacity for 50).  Both locations use in-person learning and online learning platforms to allow students to engage in real-world projects and gain credit for their life experiences.

“Given the hardships many of our students face with transiency and instability, we often find their credits are not an adequate marker of their preparedness for college or the workforce. There are no grades at RISE. We focus not on their seat time, but on chapters through life by building portfolios of their work from jobs, internships, and employable skill sets so they can thrive independently,” Whalen says.

Funding for RISE High, part of the DaVinci Schools Partnership charter schools network, was provided by a $10 million grant from the XQ Institute, funded by the widow of Apple founder Steve Jobs. Whalen and Kari Croft, who is now principal at RISE High, became aware of the XQ Institute while associated with Teach for America. They talked to students in the foster care system and those experiencing housing instability about what school environment they needed to best support them and together with teachers, administrators, and industry partners, wrote the grant and charter petition to secure the $10 million grant that provides startup funding for RISE High, which could eventually serve 500 students.

“The XQ grant was an intense competition and receiving the award was a huge dream. We based the proposal on what the students told us they needed to be successful. The XQ grant provides a launch point to respond to those needs,” Whalen says. 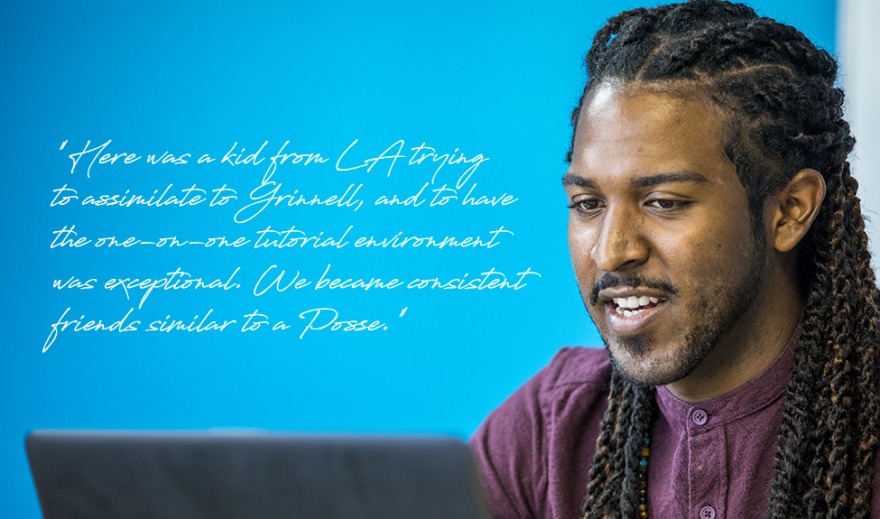 Classes started Aug. 17 at the year-round school — year-round, Whalen says, because “these students need stability and services year-round, not just eight months of the year.

“Our biggest challenge is tracking down our students’ transcripts and records. The larger educational system hasn’t done a good job of tracking and crediting transient youth. Many have the skills but are consistently put in the same classes year after year because they don’t meet the required ‘seat time.’ At RISE, we focus on mastery as a marker of success, not seat time.”

At the same time, the biggest reward, he says, is seeing the students from last year’s pilot return and rally around each other and help new students. “The more students take over, the better. The environment I’m trying to create is having productive conversations in the classroom about issues on campus and around the world. That’s what I saw modeled at Grinnell, and I want our students to have those experiences.”

There is no typical day at RISE High, given the students’ many background challenges. With flexible scheduling, students are offered a wide variety of electives, from IndepenDance taught by Whalen to life skills and social awareness taught by a student. Students are also part of an advisory family where they process challenges and build social and emotional competencies.

What resonates with the Grinnellian most at RISE High is that “students create the culture and curriculum; students are the voice for other students; that’s self-gov,” he recalls of his own campus experience. At Grinnell, Whalen helped start IndepenDance, a hip-hop dance group, and was a member of the Student Organization for Latinos/Latinas (SOL), monitor at the Black Cultural Center, and Posse liaison and summer intern.

“My strongest experience at Grinnell was the First-Year Tutorial. Here was a kid from LA trying to assimilate to Grinnell, and to have the one-on-one tutorial environment was exceptional. We became consistent friends similar to a Posse.

“I came to Grinnell as a biology major and had also thought about law school for social justice issues. Then I fell in love with anthropology. Working with Professor of Anthropology Katya Gibel Mevorach was outstanding. Through cultural anthropology, we studied how we ignore equity; and it allowed me to look at different perspectives that I now use to create an engaging environment for RISE students,” Whalen says. As assistant principal, he is responsible for curriculum development and student culture.

Whalen himself plans a return to the classroom to begin work on an eventual doctoral program in educational leadership, “to continue to fight for educational equity at the district or national level.”

Proof is in the students 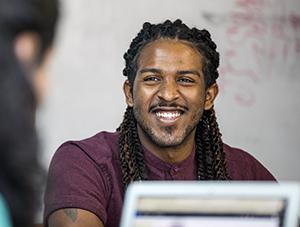 The proof of concept for RISE High will be in the students’ successes, says Erin Whalen ’12.

“Given that we seek to serve students whom the traditional system has not served well, we often receive students who are older. We often find that regardless of their mastery of essential skills, their credits are not an adequate marker of their preparedness for college or the work force. We don’t actually use the terminology of grade levels in our community. We speak about a student’s progression through high school in terms of chapters through life. Chapter 1 being furthest from graduation with particular attention on foundational skills and Chapter 3 being closest to graduation with focus on college pathways or work preparedness.”

These students say Erin and RISE High are already making a difference in their lives. (No last names are used since the students are minors.)

“Erin has assisted my transition to high school by providing me with the materials and opportunities I need to become the man I wish to be and by pushing me to the platform I need to satisfy my ambitions. He is very dedicated to all those around him and is always finding new ways to provide success to his peers and himself,” says Hiram, whose ambition is to become “the next black leader.”

Aracely, who attended RISE last year and is now a junior, says RISE “offers me a voice to speak my mind with no judgment from my peers.

“Ever since I met Erin, he’s been nothing but supportive of me. Erin helps my problems inside and outside of school, giving me emotional stability and supporting my interest beyond high school in psychology.”