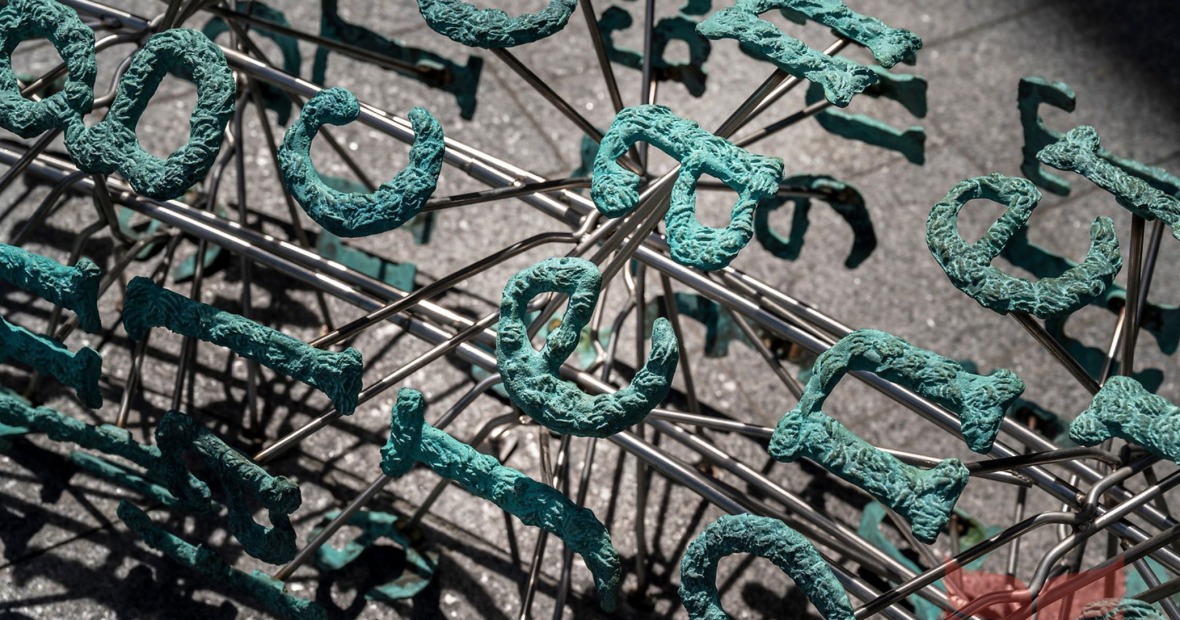 More than 40 years after Gregory M. Gómez ’80 first read one of W.B. Yeats’ most famous poems in a class in Alumni Recitation Hall, the distinguished sculptor has designed, created and installed a sculpture based on the power of that poem.

Broken English graces the plaza just east of the College’s new Humanities and Social Studies Center. The $112 million center will be finished in 2020 when renovation is completed on two adjacent historic buildings, Alumni Recitation Hall and Carnegie Hall, which will be integrated into the main structure.

The sculpture is a gift to Grinnell College from John B. Chambers ’77. He captained the varsity swim team when Gómez joined the squad as a first-year student. They have many mutual friends and have stayed in touch over the years.

Gómez and Chambers, who made the gift in memory of his wife, Jean Marie Chambers, will join college officials, students, faculty, staff, and alumni for the dedication of Broken English at 4 p.m. Saturday, Nov. 9, in the plaza at 1226 Park St., Grinnell. The ceremony is free and open to the public.

Broken English is a 20-foot diameter broken circle, made up of welded stainless-steel rods and sand-cast bronze letters with patina. The letters, which, when read vertically around the circumference, repeat the first few lines of Yeats’ poem The Second Coming:

“Turning and turning in the widening gyre
The falcon cannot hear the falconer;
Things fall apart, the centre cannot hold; …”

“I was responding to the poem and taking cues from it, as opposed to representing it literally,” says Gómez, who teaches sculpture and drawing at Boston University. His public works include Homage to Ramon y Cajal, a three-dimensional neuron honoring the father of neuroscience at Harvard Medical School, and a sculpture that celebrates Chicago Cubs history and scorekeeping, The Encrypted Inning, at the Addison Elevated Train Station near Wrigley Field.

“Broken English celebrates the work of the humanities and social sciences,” says Lesley Wright, director of the Grinnell College Museum of Art. “In its form, it is like the work of scholarship: It comes apart and draws back together. As sculpture, it’s a powerful object that engages language as a fundamental element.

“Yeats’ words suited his world 100 years ago, and they are just as meaningful today,” Wright adds. “Gómez’s use of bronze lends the piece a sense of history, and the scale of it keeps us coming back to engage with the meaning.”

In 1997, Gómez had works included in an exhibition, titled The Widening Gyre, in a New York City gallery. Gómez’ recalls discussing Yeats’ poetry with Chambers.

“I remember we talked about The Second Coming and how our interpretations of the poem have changed over the years,” says Gómez, noting that the beginning of the poem focuses on the world breaking apart and the center collapsing. “Yet,” he adds, “I think of Broken English as being more cautionary, not defeatist.”