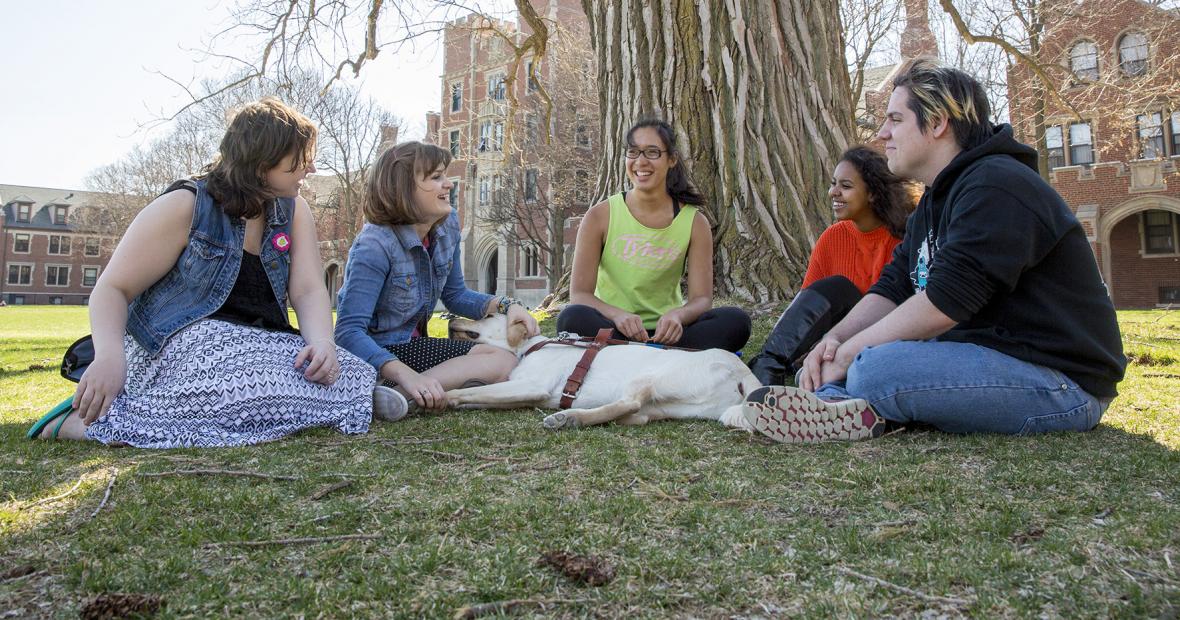 Immediately upon coming to campus, students are introduced to the organizing principle of the Grinnell experience, self-governance.

While “responsibility,” “accountability,” and “respect” are familiar concepts to most first year students, their practical application in a self-governed community can be challenging. Many first year students say that the only real way to “get” self-gov, is to experience self-gov.

“I had no idea what it meant,” Lucy Sidi ’18 says. “I didn’t know what to expect until I came here for New Student Orientation. Everybody was talking about self-gov and how it means that you look out for the person next to you.

“After talking about it, I definitely felt like I had a good foundation of what it meant and how I could be a part of it. After experiencing it myself on several occasions, I have fallen in love with the idea of it.”

Take care of each other

“The big thing everybody says on campus — and the first thing I heard — was “self gov is love.” After being here for a semester, what self-gov means to me is that we take care of each other, and that’s a really important thing to foster in a community,” Sidi says.

“I feel like self-gov guides the social aspect on campus and the way we communicate with each other. We really do control a lot of how we handle different situations or come up with our own safety precautions,” Sidi says. “There are definitely limits, but they’re broad and wide, and there’s plenty of room for self-gov within them.”

Sidi’s experiences so far have helped to assuage one family member who had prior concerns about self-gov and campus life.

“Before I came here, my mom was worried about it because she thought it sounded kind of crazy, like there were no rules,” Sidi says, “She was almost uncomfortable with me coming to a campus where it was so loose-ended.

“After I explained to her how it really is, and that it’s not a bunch of wild kids making up a community of no rules and no safety boundaries, she really likes the idea of it, too.”

Deqa Aden ’18 says a big reason she wanted to come to Grinnell was because of the “sense of community” she felt during a prospective student visit.

“I saw people doing all these fun activities together, being there for each other, and I’m thinking this is a really nice, warm community. It was what I expected, but I didn’t know what self-gov was,” Aden says.

“I was excited about college because I wanted to experience independence. At the same time, I’m the one making choices and living up to the consequences of those choices,” Aden says. “I’ve never been to a place where I’m always accountable, and also helping others to make sure that they’re OK. Self-gov kind of teaches you that.”

Aden elaborates, “Self-gov is just us. We are running our lives together pretty much. But it’s never us only. There are levels to it. It starts with you, the person next to you, your students, your friends.

“That’s what I didn’t get at the beginning when they talked about self-gov at every single orientation program,” Aden says. “It’s like, OK, I cannot wait to understand it, but then the only way to get it is to experience it.”

Leina’ala Voss ’18 says she thinks self-governance reflects the people who choose to come to Grinnell. “In general, I find people here have been very friendly, open, and genuine,” Voss says.

“Mostly, the administration treats us more as adults,” Voss says. “Our own government allocates money to different organizations the way it wants to, which is a pretty big deal. Before I came, I didn’t really believe that student government meant anything, but after being here I realized how much power (SGA) actually has on the campus. That’s impressive to me.

“Self-gov also plays a significant role in our living situations,” Voss says. “The administration doesn't dictate a set of rules each hall has to follow, but rather lets us self-gov it out. They leave it up to the people actually living there to decide.

“For instance, some halls don't have ‘quiet hours’ like many other colleges do. Instead we are held responsible for being courteous to people sleeping when it gets late,” Voss says. “But some other halls like more structure, so they do have quiet hours. It gives us the ability, and responsibility, to personalize our living quarters.

“Self-gov is all about respect – respecting your peers, respecting your floor mates, respecting the school,” Voss says. “It's an important life skill to learn and to practice. I'm glad Grinnell is the type of place that fosters this kind of education and community.”

Lucy Sidi ’18 is from Crystal Lake, Ill. Deqa Aden ’18 is from Hargeisa, Somaliland. Leina’ala Voss ‘18 is from Portland, Ore.