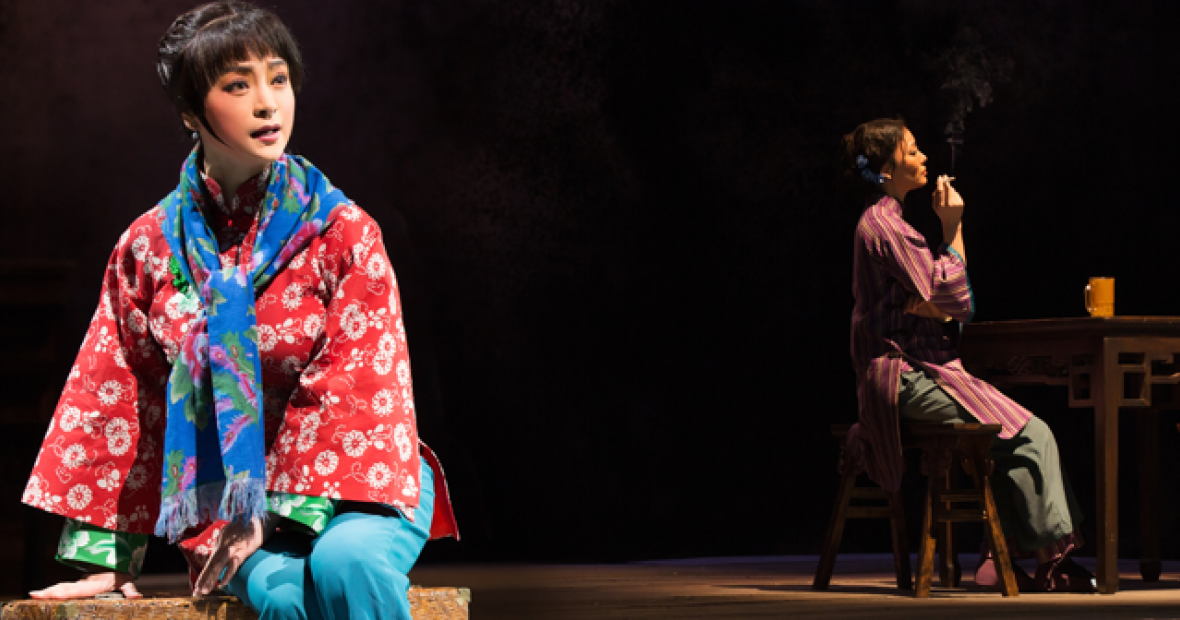 Two different productions of Eugene O’Neill’s 1921 play Anna Christie will be performed Oct. 9–12, offering an opportunity to juxtapose the musical and theatrical traditions of China and the United States.

The award-winning Ningbo Yong Opera Troupe from Ningbo, China, will visit the College to perform Andi. Andi is a Chinese operatic adaptation of Eugene O’Neill’s play about an estranged daughter with a dark past. Grinnell student actors will also present an English-language production; Sandy Moffett, professor emeritus of theatre and dance, directs the English production.

Both productions of Anna Christie will share the same set in Roberts Theatre in the Bucksbaum Center for the Arts. “It will be fascinating to compare and contrast these two productions of the same drama in different languages and art forms, as both versions are performed in alteration,” Moffett says. “The style of traditional Chinese opera and dance is quite different from the Western style, and should interest anyone interested in the history of opera, dance or China.” The Chinese troupe consists of nine actors and about 15 musicians who play traditional Chinese instruments. Grinnell music students will join them, playing Western string instruments required by the score.

With a wide repertoire featuring traditional Chinese opera and interpretations of modern works, the Ningbo Yong Opera Troupe of the Ningbo Performance and Arts Group has performed in France, Germany, Saudi Arabia, and the United States, among other countries. The group’s recent performance of The Red Dress at New York City’s Lincoln Center won the 11th National Spiritual Civilization Five Top Project Prize and the Excellent Repertoire Award of the Seventh China Dance Lotus Award. Playing the lead role of the daughter will be Wang Jinwen, who received the top national award for a Chinese opera performer in 2012 for her performance in the opera Wife in Pawn.

Members of the Chinese troupe will conduct an open workshop with Grinnell students interested in music and theatre. The weekend also will feature a lecture by a Chinese literary scholar about Eugene O’Neill in China.

The troupe’s visit is made possible by Grinnell’s Center for International Studies and the Department of Theatre and Dance.

Unless otherwise noted, all events are held in Roberts Theatre, Bucksbaum Center for the Arts. All events, with the exception of The Ningbo Yong Opera Troupe’s Saturday evening performance are open to the public at no charge, although tickets are required.

Tickets may be obtained at the Bucksbaum Center for the Arts box office beginning at noon Monday, Oct. 6. A limited number of tickets also will be available at the Pioneer Bookshop in downtown Grinnell. For more information about tickets, call the box office at 641-269-4444.

4:15 p.m. – Haiping Liu, professor of foreign language at Nanjing University, and Sandy Moffett, professor emeritus of theatre and dance at Grinnell College, will give a lecture titled “A Strange Combination: Eugene O’Neill in China.” Room 152, Bucksbaum Center for the Arts. No tickets are required for this event.