Striking a Chord on and off Campus 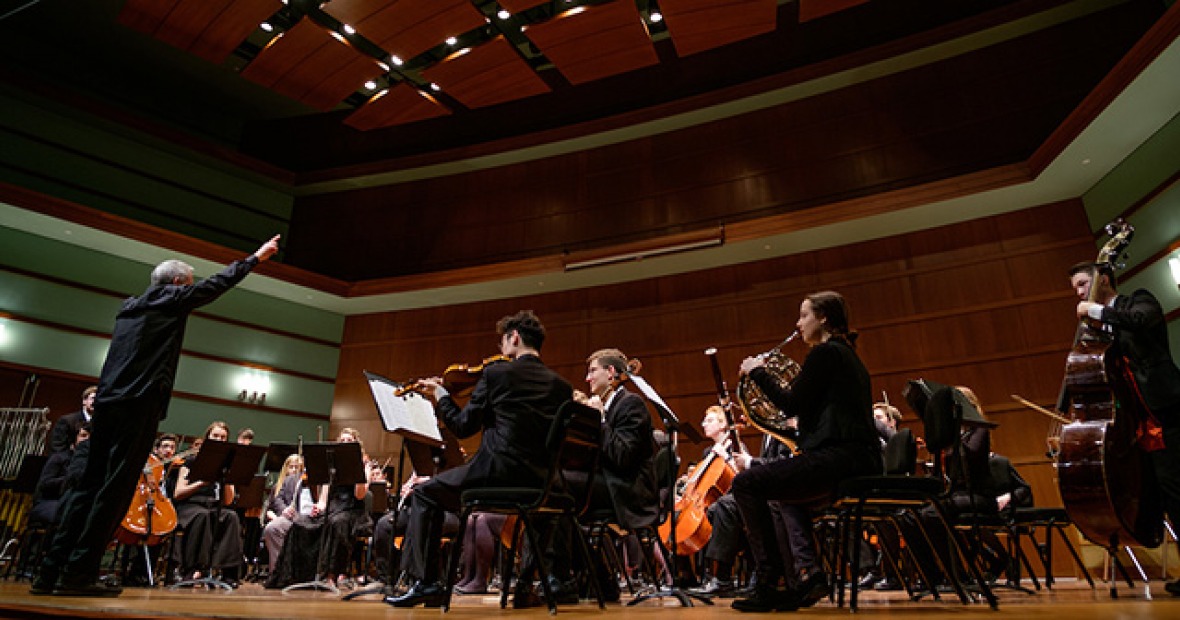 “Performing in an orchestra is a radical, political act,” says Professor of Music Eric McIntyre, who has conducted the Grinnell Symphony Orchestra for 15 years. “Orchestras are not efficient, don’t make money, and aren’t cool — all things our society values. When we participate, it flies in the face of those values.

“Active questioning is what Grinnell is about. That’s why we participate. We’re a very inclusive student ensemble, with no hired positions.”

The Grinnell orchestra’s repertoire is inclusive too — from cowboy to hip hop, from narration by the College president to performance with a campus choral ensemble; from solos by an international concertmaster to concerts at the nearby correctional facility. The orchestra also performs with faculty soloists and guest artists in residence, as well as music composed by McIntyre.

The Grinnell Symphony Orchestra performs four concerts each year, plus one at the Newton Correctional Facility where McIntyre also teaches music appreciation to the incarcerated population.

Participation averages 50 students per year, with another four to six community members joining the ensemble. McIntyre works at equalizing the sections, with some members playing multiple positions.

“One of our strengths is having students with broad experience,” McIntyre says. “For a school of our size, we perform many diverse programs each season with amateurs sitting side-by-side who love music. The role of collaboration is very strong here too among students who are not satisfied to only do the norm.”

Orchestral experience among members is as wide-ranging as the music they perform. Some played in public school bands. Some performed in youth orchestras in major cities. A few each year are music majors, but most are participating for their love of music in a non-competitive environment.

Katie Parrish ’18, a chemistry and music double major from South Hadley, Massachusetts, started playing cello at 14, later than some of her section mates in the Grinnell symphony. “I’ve seen the orchestra grow and change. I’ve learned from others when we’ve switched up seating.” She has been first chair all four years and balances symphony rehearsals with chemistry labs and the demands of also being a varsity diver.

From her perspectives as a chemist, athlete, and musician, Parrish points out that symphony rehearsals are only four hours per week compared to her daily in-season practices as a diver and the late-night chemistry labs throughout the year.

“You have to devote the time if you want to step outside yourself to create something bigger. When it’s a small school with a small orchestra, it’s intense but motivating to come together. We all get to be part of this amazing experience.”

She will attend grad school in chemistry at the University of Wisconsin-Madison next fall and knows that music will continue to be a part of her life.

“I’ll always do music. I prioritize music as one of the things I need to continue because of my amazing experience here,” Parrish says.