Thanks in part to a lead gift from Dick Knapp ’76, film and media studies classes will eventually be held in a new downtown building. 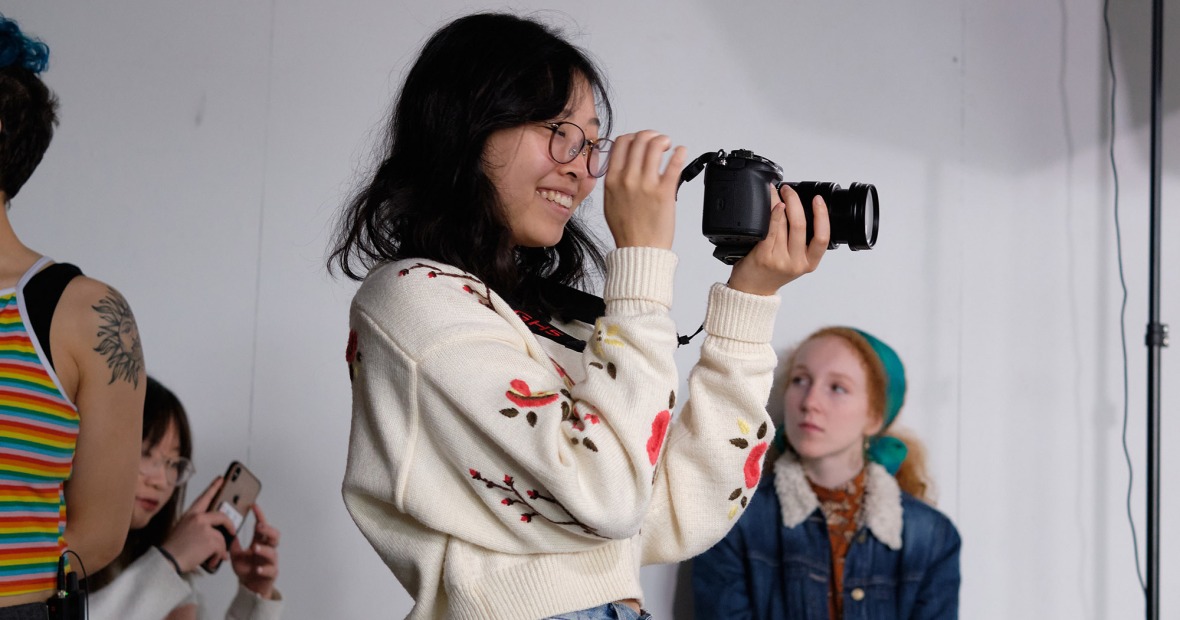 Nana Okamoto ’20 looks through the camera during Fundamentals of Video Production class. Photo by Ethan Nelson.

After many years of preparation, Grinnell College will begin offering a concentration in film and media studies this fall.

Film and media studies has been a coveted academic subject for both current and prospective students. Courses offered at Grinnell the past few years in film theory and media production have filled up quickly. A dozen students in the past decade have graduated with an independent major focused on film or media studies.

“Today’s prospective students are digital natives; media consumption and production have played and continue to play a key role in their everyday lives,” says Nicky Tavares, assistant professor of film and media studies. “Each semester I ask my students to fill out a survey to help me get to know them better. One of the first questions I ask is, ‘What motivated you to take this course?’ Students’ responses to this question reveal a desire to build a critical vocabulary for better understanding and analyzing the media that surrounds them and to develop necessary skills to become effective, original media makers.”

“It’s awesome how the College has built up the program in film and media studies,” Teuber says. “Video Production was definitely one of my favorite classes. We learned camera techniques and editing that will be applicable to a bunch of different areas of interest. We made four film projects and had a final film screening, which gave us the chance to critique others work. It was a super collaborative class.”

The addition of film and media studies as a concentration coincides with the College’s plans to renovate a building near the northwest corner of Broad Street and 5th Avenue into a film and media center.

Over the past 15 years, Dick Knapp ’76 has acquired, renovated, and re-tenanted eight downtown properties that have helped meld the College with downtown Grinnell. Knapp recently made a leading gift commitment to support the first academic building downtown. The Knapp Film and Media Center will be housed in a 100-year-old former auto garage that was most recently used by St. Mary’s Catholic Church. The design plans for the renovations are underway by OPN Architects.

Having a designated home for film and media studies classes and events will be advantageous, Tavares says.

“Currently film and media classes are being held in borrowed and shared spaces in three different buildings across campus,” she says. “Students learn video/audio production techniques in the Bucksbaum Center for the Arts, edit their video projects in Burling Library, and attend film screenings in the Alumni Recitation Hall’s (ARH) auditorium, often lugging heavy production equipment in between.

“The new building will serve as a much-needed centralizing hub,” Tavares adds. “Given that varied forms of learning – in and out of the classroom – are a part of Grinnell’s core values, and the downtown location of the film and media center, we are in a unique position to develop spaces that not only support the film and media studies curriculum but also engage the community through public-facing programs.”

A Film and Media Studies Working Group comprised of 24 Grinnell College faculty and staff members and a 12-member Film and Media Studies Concentration Committee determined the particulars of the concentration, which is intended to prepare students for the ever-changing media landscape of the 21st century. Grounded in theory, while emphasizing practice along with Grinnell’s core value for social responsibility, the program will push students to discover their own original creative voices.

“The concentration will enhance what the College already offers academically by providing a cohesive structure for existing courses that explore film and media dispersed across humanities and social studies curricula and introduce new courses that emphasize media production,” Tavares says. “The new concentration will attract and retain a new cohort of students interested in this field who may have chosen Grinnell’s competition in prior years. All of our peer institutions have programs in film and media studies or related fields.”

Tavares has taught at the College since spring 2019. Prior to coming to Grinnell, she divided her time between teaching and working as an independent filmmaker and media artist. While in graduate school, she began volunteering as an artist mentor for at-risk youth at New Urban Arts in Providence, Rhode Island, and Brick-by-Brick in her hometown of New Bedford, Massachusetts.