Stumbling on to the Spanish Major 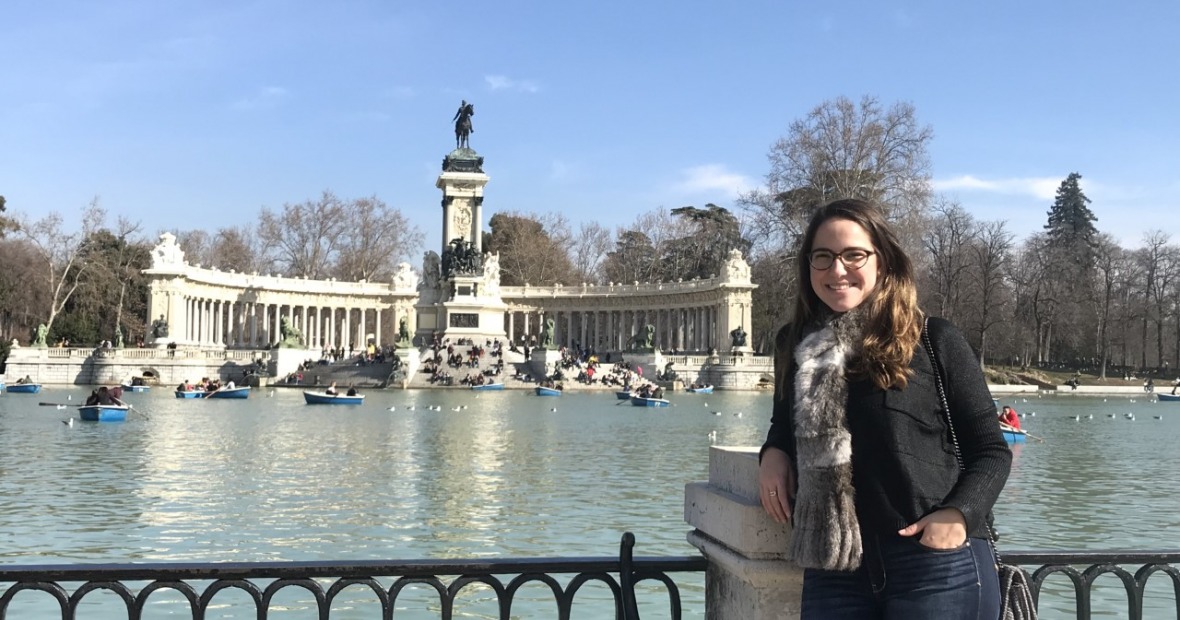 When Natalie Gentil ’14 arrived in Grinnell from Rio de Janeiro, she already knew she wanted to pursue a major in political science. She was also passionate about learning languages. What she didn’t know, though, was how that interest would lead her to another major, one that has paid dividends in her professional career: Spanish.

Finding the Major, and Much More

During high school Gentil studied French, but when she came to Grinnell, she took placement tests in both Spanish and French. Despite only two years of formal Spanish in middle school, she fared better on the Spanish test. Rather than start again with French, Gentil enrolled in Introduction to Spanish with Yvette Aparicio, professor of Spanish. As a native speaker of Portuguese, she took easily to Spanish and soon found herself taking Spanish classes every semester.

Gentil loved the language and decided to study abroad in Madrid in the fall semester of her third year. When she returned in the spring, she was in a class with Mirzam Pérez, associate professor of Spanish, when Pérez told her she only had two classes left to complete the major.

“I stumbled on to the major, but I’m really glad I did it,” says Gentil.

More than a Language

For Gentil, learning Spanish was about much more than just speaking the language; it was also about gaining insights into another culture. Especially in her literature courses, she found herself fascinated by the perspective that Spanish offered into other cultures and societies.

“Being able to relate to a culture and understand the differences between the other culture and your own has been very valuable to me,” Gentil says.

Studying abroad in Madrid cemented those perspectives; but for Gentil, Grinnell was like one big study-abroad experience. Growing up in Brazil, she had a relatively homogenous social group. But when she came to Grinnell, she met people from all over the world with drastically different backgrounds than her own; some had escaped genocides or fled from war-torn countries. Meeting those people and learning their stories helped Gentil gain an appreciation for the stories of people from all walks of life and inspired her to serve as the president of the International Student Organization after her first year.

After graduation Gentil returned to Brazil. where she found a job with Ernst and Young, a consulting group. Although she didn’t use her Spanish-speaking skills initially, the intercultural understanding and ability to communicate with others from different backgrounds proved immensely helpful. After transferring to work in Los Angeles, Gentil now uses her Spanish on a daily basis for her job.

Gentil says the language skills and cultural understanding from her Spanish major have been valuable as she works with clients from various Spanish-speaking countries, and her managers have assigned her to projects because of her language skills. Her specific line of work is internal auditing. No one likes to be audited, she says, so it makes the clients a lot more amenable if you can speak their native language.

For clients whose first language is Spanish, Gentil can provide a higher level of comfort to them by speaking Spanish. “It’s good to be able to analyze different perspectives and understand that people’s backgrounds affect the way they think and work and their communication styles.”

Although Gentil ended up majoring in Spanish more because of her passion for language learning, she has found the skills and understanding gained from Spanish at Grinnell to be immensely beneficial in her professional life.