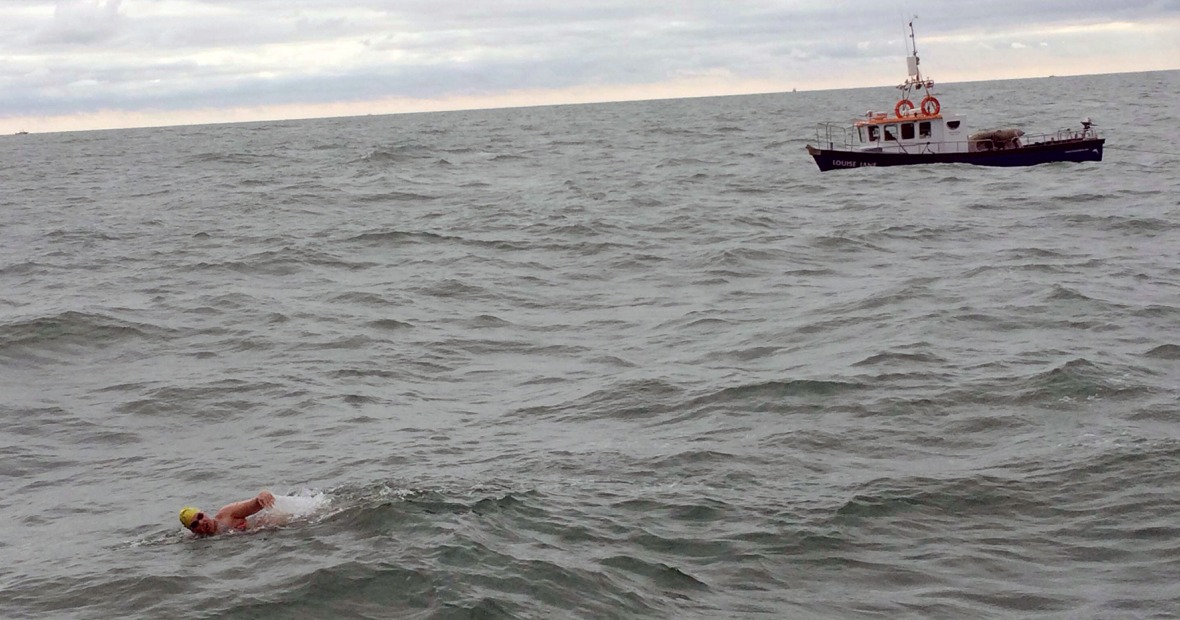 Delia Salomon ’14 wears Grinnell colors as she prepares to start her swim from Shakespeare Beach in Dover, England. Salomon swam the 500- and 1650-meter freestyle at Grinnell. She lettered all four years and earned academic all-conference honors three times.

Delia Salomon ’14 started her attempt to swim the English Channel from Dover, England, in the dark of night. In the daylight of hour 10, she was “quite shocked” to have France already in sight.

“I tried not to be looking toward France too much because that can play tricks on your mind,” Salomon says. “Once I realized how close I was, it was really exciting.

“The finish line was very stressful because the wind picked up,” she says. “I was trying to land on a rocky beach and not get completely smashed.”

A month after completing the most famous long-distance swim in the world, Salomon recalls her landing at Cap Gris Nez Sept. 7, 2015. “I felt a huge sense of relief,” she says. “And also disbelief.

Salomon made the 21-mile crossing in 10 hours and 33 minutes — on the fast side of recorded times (from 6:55 to 28:55) and faster than she had anticipated, thanks to favorable currents and winds, she says.

It was her second try. She’d made an attempt in 2008 when she was 16 years old, but it was called off by bad weather after 11 hours.

“I’d read the book Swimming to Antarctica by Lynne Cox when I was 15 and decided I wanted to do it,” Salomon says. “I guess I am just really stubborn, so once I was thwarted by the weather I wanted a rematch. I knew I had to finish it.”

Open-water swimming appeals to Salomon because there are many ways of defining success. “Sure, there are some who have the records for the fastest or the most or the first of some crossing,” she says, “but it can also be more than that. I just wanted to get across. I didn’t care how long it would take.”

Salomon enlisted her own boat pilot to guide her crossing. Typically boat pilots are fishermen who are familiar with the channel and are in complete charge. The pilot chooses the day of the crossing and has final say on all safety matters: he has the authority to end the attempt.

“The days leading up to the swim are nerve-racking because you are on call and don't know exactly when you will be swimming,” Salomon says. “You have to be ready to go whenever your pilot says.”

An observer from the Channel Swimming Association made sure that official rules were followed. Salomon was not allowed contact with anyone in the boat during her timeouts. At 30-minute intervals she stopped to drink a “carb-protein-electrolyte mixture” of her own concoction. She managed to avoid two big challenges to channel swimmers — jellyfish and tanker ships.

Salomon’s yearlong training for the crossing included help with open-water technique from Tim Hammond, Grinnell assistant swimming and diving coach. “Tim has always been super supportive of my open-water swimming,” she says.

Needing to be mentally and emotionally fit for the challenge, Salomon stayed motivated with the strong support of family, friends, and coaches. “I have been working for many years to learn how to deal with negative thoughts,” Salomon says. “I really struggled with it in college because I was so hard on myself after not finishing my first channel swim.”

Salomon credits Erin Hurley, head swimming and diving coach, for giving her perspective when she was a student. “She told me that I needed to start talking to myself the way I would talk to a friend,” Salomon says.

“During the swim there were actually very few times when I was feeling down or negative,” she says. “I really felt like I was focused and in the moment. It's great to actually see what I had been visualizing for so long finally come to fruition.”

The second day after her crossing, Salomon swam. “It was hard, but I think it helped my muscles,” she says.  After three days, she felt “pretty normal” except for being “very scratched up” from the rocks.

“Before this I never thought that highly of my capabilities to accomplish things that are difficult,” Salomon says. “I learned that I do have some grit and that I can fight through tough situations whether those may be in my head or part of the outside world.

“I don't know that I would say that I did this to prove to myself that I could,” Salomon says, “but in the end I was like, yeah OK, you can do stuff like this if you want to.”