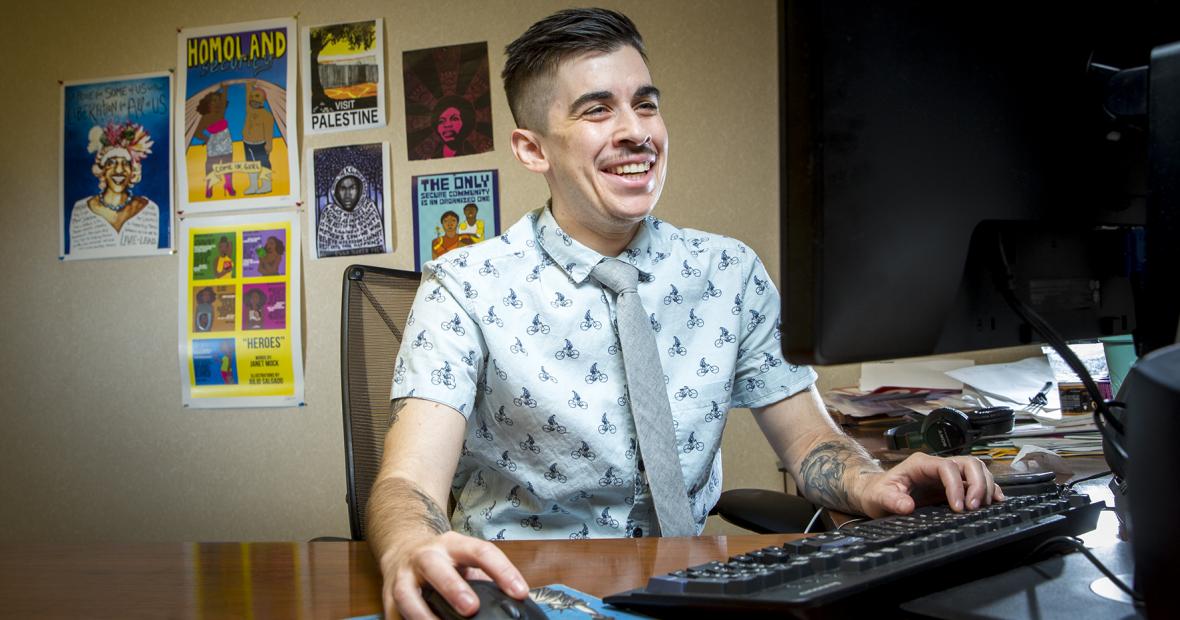 The college experience is often seen as not only an opportunity for educational enrichment, but also as a space for exploring personal identities.

For Chase Strangio ’04, Grinnell was both personally and politically formative. “I really found a home both intellectually and emotionally,” says Strangio. “I knew I was queer; I knew that I had a critical political sensibility, but I didn’t have any real sense of who I was before Grinnell.”

Strangio’s time at Grinnell solidified his commitment to LGBT rights. After graduating, he moved to Boston to work for GLAD (formerly known as the Gay and Lesbian Advocates and Defenders). While on the one hand it was an exciting experience, Strangio was disappointed by the then-emphasis on marriage and other ways the organization and other mainstream LGBT organizations were content with the constraints set by the legal system.

“I was a paralegal, and it was exciting to be there with these amazing lawyers; but I was a bit frustrated. At the same time I was coming to terms with my own gender, and I started to really gravitate toward trans legal work,” Strangio says. “I decided that I wanted to go to law school to be able to do a different kind of legal work than that being done at GLAD.”

Strangio attended law school at Northeastern University in Boston, a program he chose because it reminded him of Grinnell. “It was a school that had a very self-selecting body of students who cared a lot about social justice.” His three years of law school were dedicated to issues of mass incarceration, criminal justice, and trans justice.

In addition to his desire to help people as a direct services lawyer (a lawyer who works with organizations that serve low-income individuals by providing them with affordable or free representation), Strangio was also drawn to a law degree for the legitimacy he felt it would bring.

“If I’m being perfectly honest, I knew that I was sort of an outsider in the world in certain ways,” he says. “I felt like getting a law degree would force people to take me seriously.”

Strangio took a job at the American Civil Liberties Union (ACLU) in 2013, where he has worked for the last three years. He currently represents Chelsea Manning, who was convicted in 2013 of multiple charges related to releasing sensitive documents to WikiLeaks, in her case against the Department of Defense for denying her hormones while in prison.

“One of the things I really love about working at the ACLU is that I’ve been able to utilize creative and collaborative approaches to doing legal advocacy,” Strangio says. “Taking litigation and combining it with traditional media and social media and leveraging multiple points of intervention to try to effect change.”

He also loves working in an environment where his colleagues are doing the most exciting and important work in the field, because “it’s an incredible intellectual environment.” He now has the resources and support to pursue the kind of work he’s passionate about with the support of a vast network of colleagues who care as much as he does.

“I feel incredibly privileged to get to do the work that I want to do on behalf of my community. Just to be able to work in collaboration with people who are doing such inspiring things — it doesn’t really get better than that.”