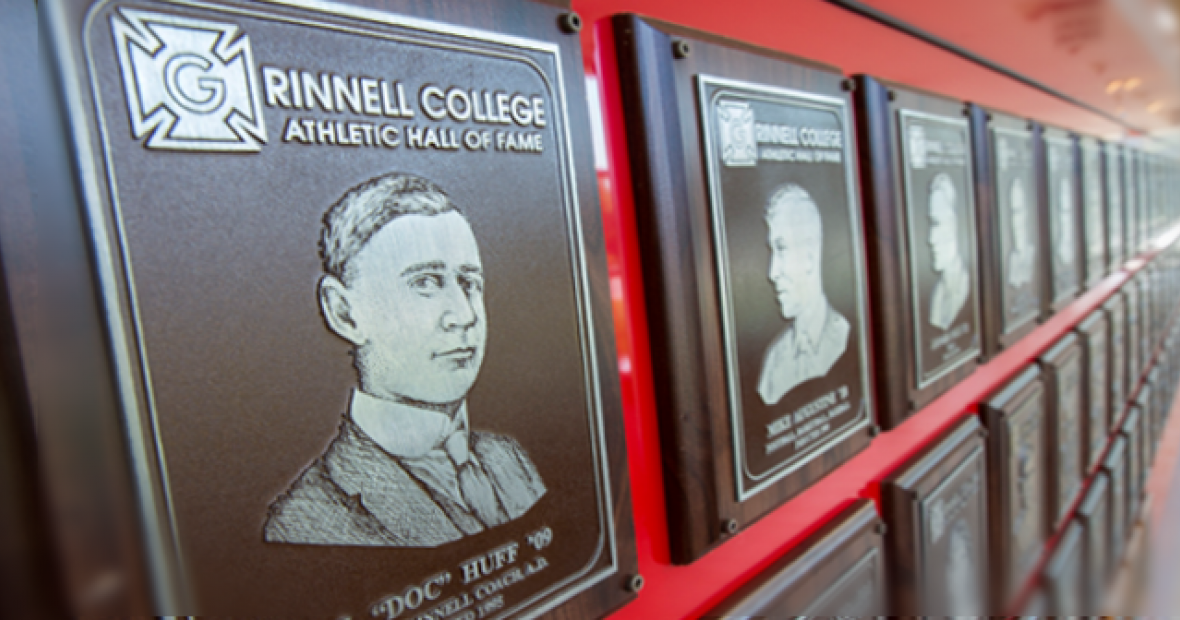 The Hall was created in 1995 to recognize the achievements of the college’s most accomplished student athletes.

This year’s inductees will be honored on Saturday, Aug. 30. A morning ceremony, reception, and picnic lunch will be free and open to the public. A dinner for the inductees and their families is scheduled for that evening.

The 2014 Grinnell College Athletic Hall of Fame inductees are:

W. Eric “Country” Blevins ’04 was an NCAA All-American in diving. Blevins is the only Grinnell athlete to win eight Midwest Conference diving championships, and he owned multiple pool records at the time of his graduation. He later went on to be a successful diving coach. Blevins currently resides in Trenton, N.J.

Emilio “Jake” Chavez ’01 was an All-American baseball pitcher for the Pioneers. He was a three-time Midwest Conference South Division Pitcher of the Year and was named all-region three times and all-conference all four years. Before embarking on a professional baseball career, Chavez became the only Pioneer in history to throw a perfect game. He currently lives in Ranchos de Taos, N.M.

Steve Diekmann ’95 was a two-time All-American in basketball and a two-time Academic All-American. He averaged 37.3 points per game during his senior season, still the NCAA Division III record. He was a multiple All-Midwest Conference performer and a MWC South Division Player of the Year. He currently resides in Alamo, Calif.

Diane “Dee” Fairchild served as the College’s athletic director for 21 years before retiring in 2007. She took the job in 1986, as the first female athletic director in the state to be in charge of both men’s and women’s sports programs. Fairchild came to Grinnell in 1984 and coached multiple sports besides teaching and serving as chair of the Department of Physical Education. Fairchild was a key leader in the College’s construction of the Charles Benson Bear ’39 Recreation and Athletic Center and the surrounding athletic fields. She resides just outside of Grinnell.

Stephanie Hitztaler ’96 was a two-time qualifier for the NCAA Division III National Cross Country Meet. She is the first Pioneer to qualify for nationals twice and won the Midwest Conference title in 1994. Also a track standout, Hitztaler earned All-MWC honors multiple times and was a Fulbright Scholar. She currently resides in Jyvaskyla, Finland.

Dan LaFountaine ’09 became the first men’s tennis player in Grinnell history to earn All-America honors, along with his doubles partner, Nate Fox ’09. Also an NCAA qualifier in singles in 2007, LaFountaine led the Pioneers to Midwest Conference team titles all four years. He and Fox were the first Grinnell players to earn a victory in NCAA tournament play. LaFountaine, among Grinnell’s all-time leaders in both singles and doubles play, will be honored posthumously.

David Malbrough ’35 starred for the Pioneers’ swimming team. During his time at Grinnell, he never lost a backstroke event and won all but one race his senior year. He established three conference records during his career. He will be recognized posthumously.

Robert Rollins ’86 qualified for the NCAA Division III National Swimming and Diving Championships all four years he was at Grinnell. His Pioneer career saw him break 10 school records and earn Academic All-America honors. He now resides in Oxford, Ohio.

David “Nick” Ryan ’55 was a co-captain of the football team and first-team All-Midwest Conference. Ryan broke Grinnell’s rushing yardage records for single game, season and career. The single game record was against the undefeated conference champions and exceeded their total rushing yardage. For the season, he was 12th in the nation in rushing yardage. Ryan was a sprinter and long jumper for the track team. Following a tour as an Aircraft Carrier Qualified Naval Aviator, Ryan worked for the college, eventually as the dean of admissions and financial aid. He resides in Grinnell.

Christine Thorburn ’92 was qualifier for the NCAA Division III National Cross Country Championships in 1989 and claimed the Midwest Conference title that year. She also claimed a trio of titles at the league track and field meet in 1989. Following college, she turned her competitive focus to road cycling and competed for the U.S. Olympic Team in 2004 and 2008. She currently lives in Portolo Valley, Calif.

Amy Walters ’01 was a three-sport standout at Grinnell. In soccer, she was a four-time All-Midwest Conference selection and earned all-region and MWC Player of the Year honors. She holds two school records in soccer and also the assists record in basketball. Additionally, Walters won the 400-meter dash in the 2000 MWC Track and Field Championships and is a member of a school-record relay team. She currently lives in St. Louis Park, Minn.