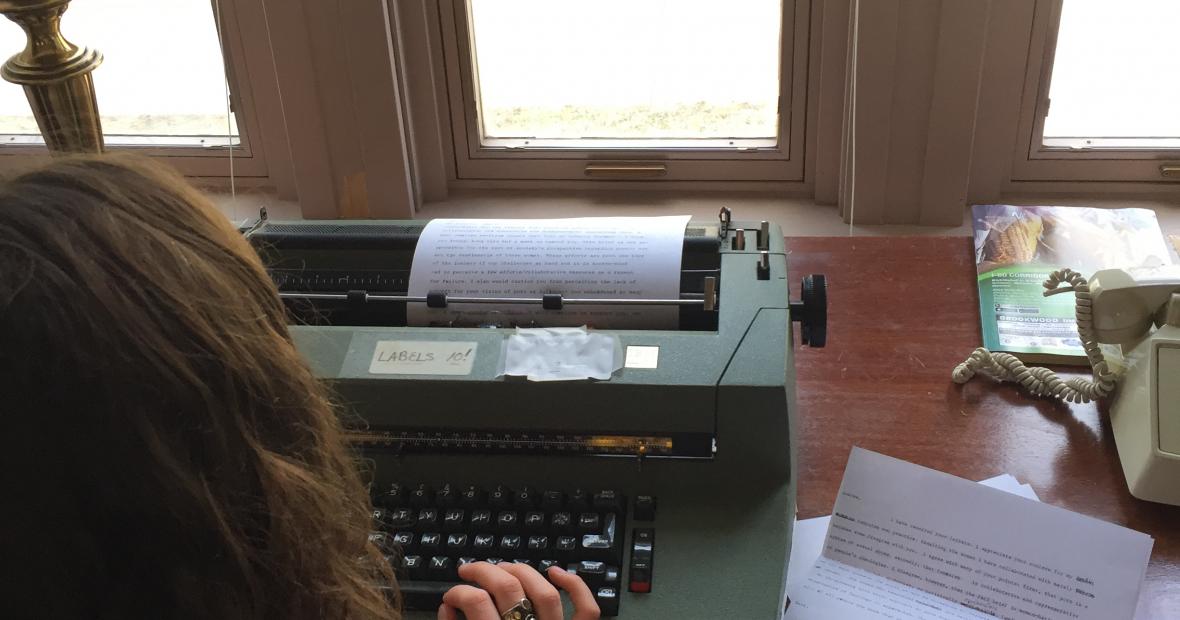 Academic research has a fairly universal M.O. It insists on a separation between the observer and the object of their research. It rejects obsolete technology and inefficient methods. And it always always requires properly formatted citations. But not in the Bad Feminists, Bad Critics senior seminar.

The course is a capstone — a culmination of students’ knowledge of gender, women’s, and sexuality studies as well as an examination of their methods of analysis. The bad feminists in the title were controversial writers, critics, and activists during the 1960s through the 1980s who have been mostly or entirely erased from feminist history. “The field of GWSS, like many fields motivated by social justice, has a tendency to look at its past and dismiss its most important figures because they’re not living up to the conditions of the present,” says Leah Allen, professor of gender, women’s, and sexuality studies and creator of this seminar.

To understand the writers in their historical context and resist the tendency to dismiss them outright, the seminar students completed assignments using vastly different methods than they had been using over the previous three-and-a-half years. “This class supported creative thinking and empathy as legitimate tools to address holes in our learned history and to engage in the complexities of the feminist movement today,” Katy Oldach ’16 says. The research process looked the same, but the analysis and presentation were unlike anything the students had done before.

Early in the spring semester, students researched the sex wars of the 1980s — public disagreements between anti-pornography feminists and sex-positive feminists. The research culminated in a public debate in which students took on the persona of an individual involved in the conflict, effectively arguing in character. “Our public debate allowed us to have a really dynamic dialogue about pornography, in front of our peers and professors,” Hannah Boggess ’18 says.

Jenny Hoops ’17 found the public performance surprisingly liberating: “You only have to embody the voice of the person that you’re assigned. You don’t have to worry about it being the perfect political statement.” One of the reasons Allen continues to use this method is that the performative element frees students from self-conscious concern over making the right argument in the right way.

Later in the semester, the students engaged in a much less public performance, writing a letter exchange based on archival material and the often hostile letters written to and by the subjects of the course. “They’re basically call-out letters,” Allen says. Using a collection of typewriters Allen had assembled from around campus, the students wrote two letters. The first was written in the voice of one figure discussed in the class to another, and the second was a reply from the recipient.

“I had never used a typewriter before, and I discovered it is an incredibly loud, aggressive, mistake-ridden, and ultimately powerful machine,” Oldach says. “I wrote differently on the typewriter. I wasn’t able to edit my thoughts as I do on a computer, and that made my writing flawed but daring — I hadn’t unlocked this aspect of my writing until this assignment.”

Because the students weren’t using their own voice, they weren’t hemmed in by the limits of what is allowed in traditional academia. “They could write things that were sweeping and grand and make generalizations and, most importantly, errors,” Allen says.

Some students from this seminar have gone on to graduate school and seen the impact of the course on their approach to their academics. Others have seen a change in their day-to-day behavior. “It's impossible to measure how this class impacted me; not a day has passed since January where I don't think about a text we read or a concept we discussed,” Boggess says.

Hoops believes the most significant aspect of the course was the application of empathy to these ignored feminists. “It’s hard to research or cite with empathy,” she says. “Being able to apply empathy to this course and these critics was freeing.” Hoops was quick to point out that empathy did not equate to acceptance: “You ended the course being just as conflicted as when you started.”

Much of the course led the students to asking themselves how they approach others — their peers, partners, parents, and strangers, as well as the critics they studied.

“We have to decide whether or not to apply critical strategies that we use on systems of oppression to people in everyday life,” Allen says. That’s not a decision that comes easily, and whatever they decide, it will be uncomfortable; but they’re prepared.

“Among other lessons, this class guided us through our discomfort engaging with controversy,” Oldach says.  “It gave me skills to navigate obstacles and difficult conversations in every area of my life.”