What Can Virtual Reality Teach Us About Life on a Plantation? 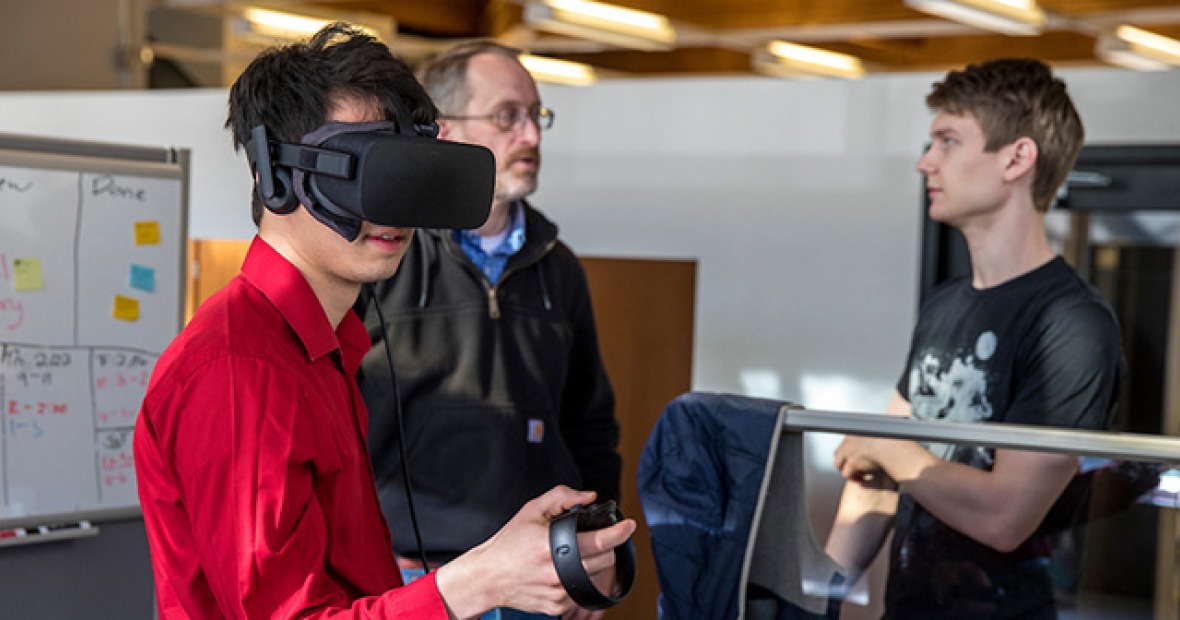 “Do you want to be an astronaut?”

This is a question you might be asked if you wander into the new Grinnell College Immersive Experiences Lab (GCIEL). GCIEL is an interdisciplinary learning initiative exploring how virtual reality (VR), augmented reality (AR), and mixed reality (MR) technologies can enhance the liberal arts experience.

David Neville, GCIEL’s resident digital liberal arts specialist and project manager, is happy to show off the lab’s equipment. This could involve getting a virtual tour of historic landmarks, going back in time to visit a Renaissance artist in his studio, or, if you really want to test your resistance to motion sickness, exploring the International Space Station in zero gravity.

The lab isn’t all fun and games, however. Colleges and universities around the world are increasingly using VR, AR, and MR as learning tools. While AR and MR work by overlaying content over the current real environment, VR fully immerses users in a virtual environment, either real or imagined. This is why VR, in particular, evokes what psychologists refer to as a sense of presence, or the subjective sensation of being physically located in the situation depicted.

“Virtual reality is about creating a sense of presence mentally, emotionally, and physically,” says Neville. “This sense of presence can lead to powerful new ways of approaching and learning academic material.”

For instance, recreating a historical site as it would have looked and felt in context can foster a new kind of understanding distinct from books or documentaries. “Books and films spur imagination and historical empathy, for sure, but VR activates those emotions in a different way,” says Sarah Purcell ’92, L. F. Parker Professor of History. “The participant can reach right in and feel as though they are interacting with the means of historical interpretation.”

To explore the teaching potential of VR technology, Purcell has teamed up with Neville for GCIEL’s first major collaborative learning endeavor: The Uncle Sam Plantation Project. With the help of a student team, Neville and Purcell are creating a VR learning experience that examines the power structures of a 19th-century Louisiana plantation through exploration of its physical objects.

The real Uncle Sam plantation was razed in 1940, but detailed floor plans of the plantation house remain. “As it is currently envisioned, the Uncle Sam Plantation VR experience will put student users in the role of a museum curator,” says Neville.

The three students working on the interdisciplinary Uncle Sam development team bring different skills and perspectives crucial to the project. Sam Nakahira ’19, a history major with an American studies concentration, has studied the era and done extensive archival research on the plantation. Zachary Segall ’18, a math and computer science double major, is using his coding experience to create an engaging and intuitive user experience. And Rachel Swoap ’19, a double major in computer science and studio art, is designing historically accurate and lifelike buildings and objects. Another student, Eli Most ’18, has been helping Segall develop code for the experience.

Each student was drawn to the project in their own way. Nakahira had taken a class on the American Civil War with Purcell, who then invited her to do a Mentored Advanced Project (MAP) exploring archives from the Uncle Sam Plantation. “I have always wanted to collaborate with others on a digital humanities project,” Nakahira says. “It was exciting to have the opportunity to conduct in-depth research on a topic of interest over a long period of time.”

Segall says that the project felt like “a natural fit” given his interests. He had already taken classes and conducted research using the Unity engine that he is now using to develop the Uncle Sam VR experience. “I study game design as a hobby and believe that games and digital experiences have tremendous potential to promote empathy and support learning, so I jumped at the opportunity to work on an interdisciplinary project that was geared towards teaching,” he says.

Swoap had done graphic design work with a visiting professor her second year. “That was my first taste of game design, and when the semester ended I knew I wanted to do more,” she says. On top of her interest in getting more design experience, Swoap was drawn to the subject matter of the Uncle Sam project. “In Grinnell's mission statement, the phrase ‘social responsibility’ comes up, and that is what I felt was reflected in this project. Between the social justice component, the art, and the programming, it felt like the perfect project for me.”

Using a new technology to tackle sensitive subject matter requires both skill and intellectual rigor. “The team has been studying the history of enslaved people carefully, and we are attending to cultural context,” says Purcell. “We are avoiding having any participant assume the perspective of an enslaved person or of the master class, but rather having them interact with material culture and the built environment to try and analyze their lives.”

The first phase of the project focuses on a recreation of the slave dwellings at the Uncle Sam plantation in the VR environment.

Over winter break, the team went to Louisiana for a week of on-site research. They visited multiple museums and plantation houses to get a sense of how professionals were narrating the stories of plantation life and curating the objects in the homes. “The project would be in a very different place if we hadn’t gone on the trip,” says Swoap.

Swoap had been particularly struck by one plantation tour, which had put the slave masters’ possessions and experiences at the forefront while largely ignoring the lives of slaves. “It was very upsetting and sickening,” she writes on the team’s blog, “but I think it was a crucial part of our trip.”

This spring, the team is meeting several times a week to build on the observations they made during their trip and to work on the technical project of recreating the slave dwellings at Uncle Sam. They are reading and discussing books about the South, slavery, and the economics of plantations at the time the Uncle Sam Plantation was built. 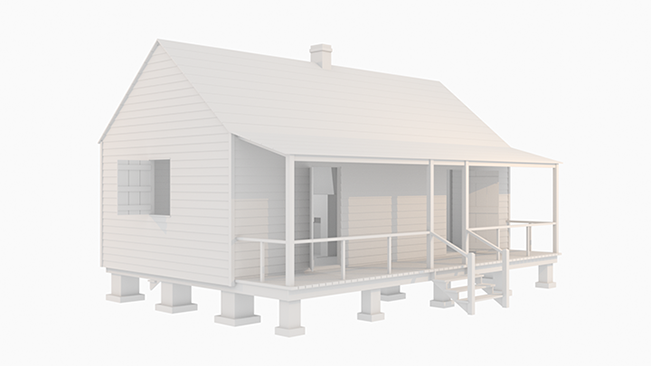 Swoap and Segall are currently combining their technical expertise to apply what they have learned from their research to a VR learning environment. Swoap is creating a 3D model of a double-pen slave cabin in 3ds Max, and Segall is using the Unity engine to program user interaction with objects to complete learning objectives. Along with Neville, they are also hoping to craft an open-source toolkit for VR interactions available for other institutions.

Since the project is the first of its kind at Grinnell and a first for the Uncle Sam team, there are likely to be many false starts, dead ends, and sticky problems on the horizon. But the team respects the skills and knowledge that each individual brings to the table, and is excited to face each new challenge and learn from it together.

“I think we have experienced both the difficulties and the opportunities that this kind of interdisciplinarity brings,” says Purcell.

By the end of the semester, the Uncle Sam team hopes to have completed the first structure featured in their VR curatorial learning experience. The slave cabin designed by Swoap will serve as the site of a museum that users of the VR experience must construct from scratch, learning about the physical space and the people who occupied it as they go.

First, users will reconstruct the cabin from a blueprint using a set number of building pieces. Once this stage is complete, a number of objects will appear that users must place in their appropriate location within the cabin. To do this, they will have to understand what the objects are and the context in which cabin occupants would have used them.

Once complete, the cabin will transform into a museum-like memorial space with information about the people who lived on the plantation. This sequence of events “provides student users with a narrative framework for organizing, comprehending, and finally internalizing their experience,” says Neville. “Future stages of project development will also employ this strategy for interrogating the other spaces and structures of the plantation complex.”