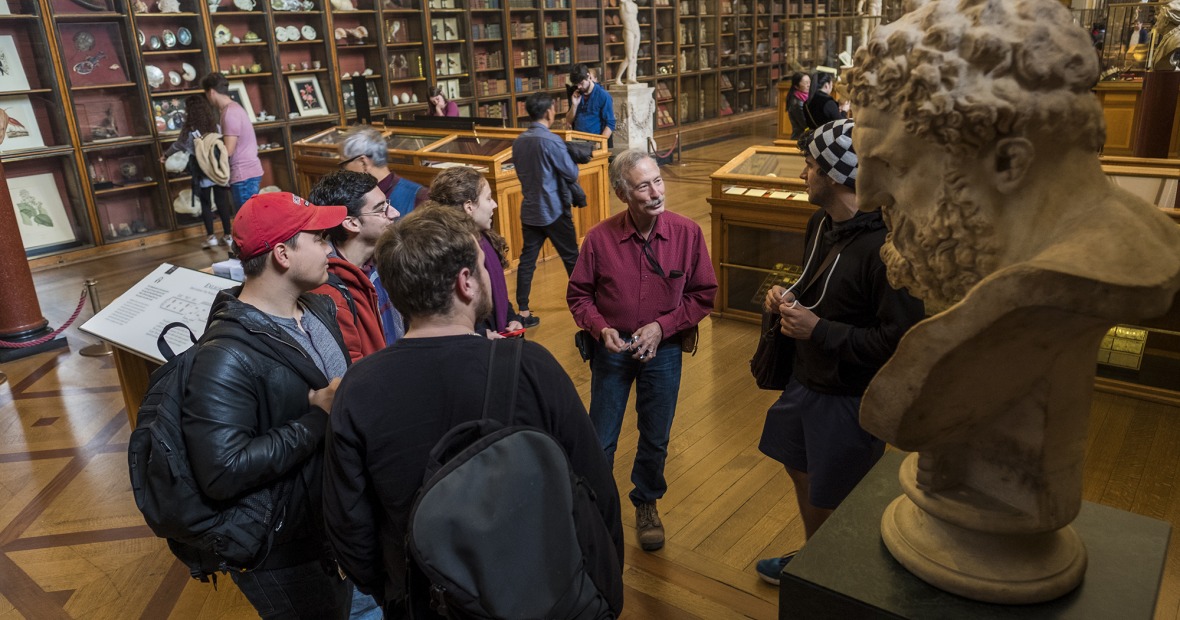 I was quite single-minded when I came to Grinnell. I intended to major in French and study abroad, which I did, although I chickened out from a full semester because I was married and didn’t want to be away from home that long. Instead, I did a summer program in Lyons, France, that included a homestay.

Perhaps because of my own single-mindedness, it never occurred to me that someone would study abroad for reasons other than increasing their language skills. So I contacted students and alumni to learn why they chose their study abroad programs and what they got out of them. 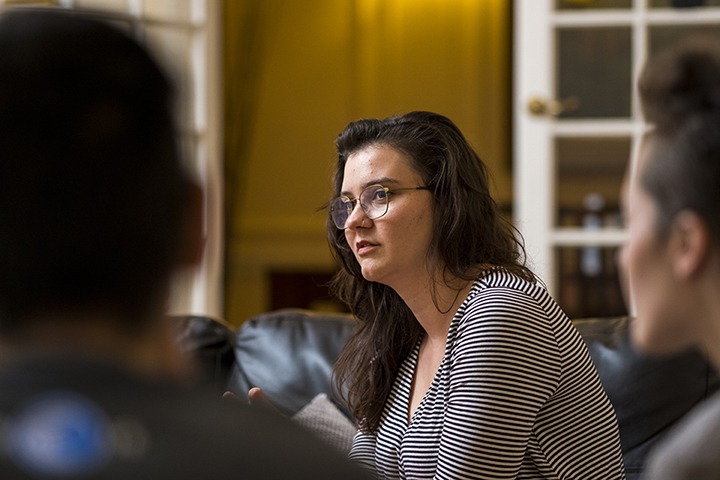 Sarah Cannon ’19 studied Spanish throughout her K–12 years and intended to continue studying it at Grinnell. “But then I saw a special-topic course my first semester,” she says. “It was Intro to Peace and Conflict Studies. I took that instead of Spanish.”

As a result of that course, Cannon’s interest in the Middle East region grew. That, in turn, increased her interest in learning Arabic. But she was torn. Should she continue with Spanish or take Arabic? She felt she had to choose one or the other. Ultimately she decided in favor of Arabic.

Before the end of her first semester of Arabic, she talked with Mervat Youssef, associate professor of Arabic, about studying it abroad.

Cannon chose a program in Jordan in part “to explore a culture that’s almost completely different from my own.” It would allow her to continue to develop her language skills without being totally immersive, since she only had a year’s worth of Arabic under her belt. But a U.S. State Department travel advisory put the kibosh on that plan.

By the time Cannon learned she wouldn’t be able to go to Jordan, Grinnell-in-London (GIL) was the only off-campus study program she still had time to apply for. Before she arrived in London, Cannon anticipated it would be “too similar to the U.S., just America but bland.” Not long after she arrived, however, she realized that her preconceived notion was “so wrong.”

While in London, Cannon chose to live in a flat with four fellow Grinnellians whom she did not know well. It was the first time she’d been on her own without some sort of structure.

“Living in a dorm is very different,” she says. “I know a lot of people who study abroad live in international dorms, or do homestays. I think our living experience is ... not unique, but I think it’s important to our experience.”

Cannon took time to explore interests that she’d “largely put on the back burner in Grinnell” — in particular, the theatre scene, which she enjoyed with her flatmates.

GIL was ultimately a good fit for the political science major from Fort Atkinson, Wisconsin, especially due to her internship experience. She interned with a member of Parliament, which presented an interesting contrast to her summer 2017 internship with the office of Sen. Tammy Baldwin, D-Wis. Baldwin has been in government service for more than 25 years whereas Cannon’s MP was fairly new to the role.

“Nothing could have prepared me for the hectic and often chaotic nature of working in a Parliamentary office,” Cannon says. “I will definitely carry the lessons I learned in Parliament with me for the rest of my life!” 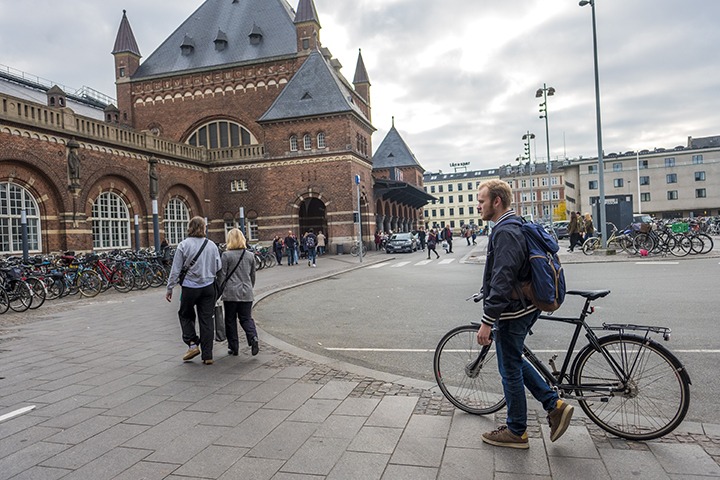 Thomas Aldrich ’19, a history major from Minneapolis, always knew he wanted to study abroad. He heard stories from his older brother Peter Aldrich ’15, who studied in London, and his dad Bob Aldrich ’79, who spent several months in Israel.

The DIS Copenhagen program was a good fit for Thomas for several reasons, including the option to do a homestay with a Danish family and that the language of instruction was English. Aldrich was not a confident foreign language learner and had not taken any language courses at Grinnell.

However, he took Danish Language and Culture because the College requires students who study abroad in countries where the primary language is not English to take a class in the country’s main language. “Even though the language is really hard, learning about the culture and how to use the limited amount of language that I have is really useful,” he says.

In Danish Language and Culture class, Aldrich says they discussed why, in an egalitarian society, you may not want to use “please” and “sorry,” and why you would want to use “thank you.”

“They don’t say, ‘Could you please pass that?’  They just say, ‘Can you pass that?’ and then they say, ‘Thank you,’ because it’s a much more egalitarian way of approaching things,” Aldrich says. “Saying ‘please’ and ‘sorry’ instantly subjugates you to the person to whom you are speaking. Saying ‘thank you’ subjugates, but in a way that you are not asking for anything. You’re not asking for forgiveness. You’re not saying, ‘Please, can I have this?’ You’re just saying, ‘Thank you for giving me what I needed,’ basically.”

Small shifts in perception like this are another reason Aldrich wanted to study abroad. Living with a Danish family presented many such moments.

One night his host mom said they were having Mexican pancakes. Aldrich wondered what the heck that was. “Tacos. We were having tacos. She was referring to tortillas.” Aldrich found the food his Danish family served to be similar to American food. “They eat a lot of potatoes,” he says, “so I’m kind of in heaven.”

For a 20-year-old used to coming and going as he pleased, living with a family had a few glitches. “I’ve come home at 4 a.m. before, and I know that I wake up Carsten [the dad]. Not because of me, but because Floyd barks.”

While Aldrich loved the quiet of his homestay, the 35- or 40-minute commute made socializing with friends trickier. “That’s one thing that I hadn’t really thought about when I first got here,” Aldrich says. “I have to be willing to just kinda hang out at my homestay. I have to be content with that if I want to make some really cool friendships here that, otherwise, I wouldn’t have made.” He pauses and nods. “It’s worth it. It’s really worth it.”

Lisa Grant ’88 spent her third year in Tokyo, Japan, because she wanted to learn Japanese. “The skills I learned in communicating across cultures — resiliency and perseverance — continue to serve me well.”

Miriam Clayton ’15 had originally planned to find a Spanish immersion program, but thanks to her interest in social science, she was encouraged to look into the DIS Copenhagen program. “I liked it and honestly was more challenged by differences in culture than I had anticipated when imagining Western Europe. The biggest changes in my life came from the freedom and responsibility to plan and execute travel — I visited 12 different countries over the course of the semester, which did a lot to boost my sense of confidence and self-efficacy.”

Laurie Kauffman ’99 studied in Costa Rica on the Associated Colleges of the Midwest Tropical Field Studies Program. “I chose it because my Grinnell financial aid covered it, because it was Spanish-speaking, and because I could study monkeys. It was hugely influential for me. I made my research into a book chapter, I’m currently a biology professor and primatologist, and I’ve led several study abroad trips with my own students back to Costa Rica.”

Kirk Karver ’83 spent a year in Seville, Spain. “[It] changed my personal and professional life in profound ways. To start, I was a history major when I arrived in Spain, but ended up at Grinnell as a Spanish major. More significantly, I met my future wife during my year abroad, and we’re still facing life’s challenges together 37 years later! And professionally, as a career Air Force officer, I have used my Spanish for the bulk of my 30-year career, which has included multiyear assignments in Panama, Spain, and Uruguay, not to mention shorter work trips to another dozen Spanish-speaking countries. I think no other year has changed my life in so many meaningful ways!”

Élen Rhoades Kidd ’03 studied in Stockholm with The Swedish Program in the spring of 2002. “It was hands down one of the best decisions I’ve made. I chose the program because I wanted to study in English, but not be limited to an English-speaking country, and wanted to take courses in a range of subjects. I also have Swedish roots (maternal grandfather) and loved the idea of studying anywhere in Scandinavia. I wanted a small program and didn’t want to be surrounded by Grinnellians. I credit that semester with so much personal growth.

“In 2005, I returned to study on my own and ended up reconnecting with The Swedish Program. As luck would have it, they were creating a new position for a recruiter, set to start right when I would be returning to the U.S. They offered it to me, and I accepted. I’ve now been working for The Swedish Program for almost 12 years and love my job. I visit colleges and talk with students about studying in Stockholm, travel to our site twice a year for orientation week with our new students, and now work in alumni relations as well. I love that I have been able to make Stockholm my second home and keep my Swedish skills (more or less) fluent.”