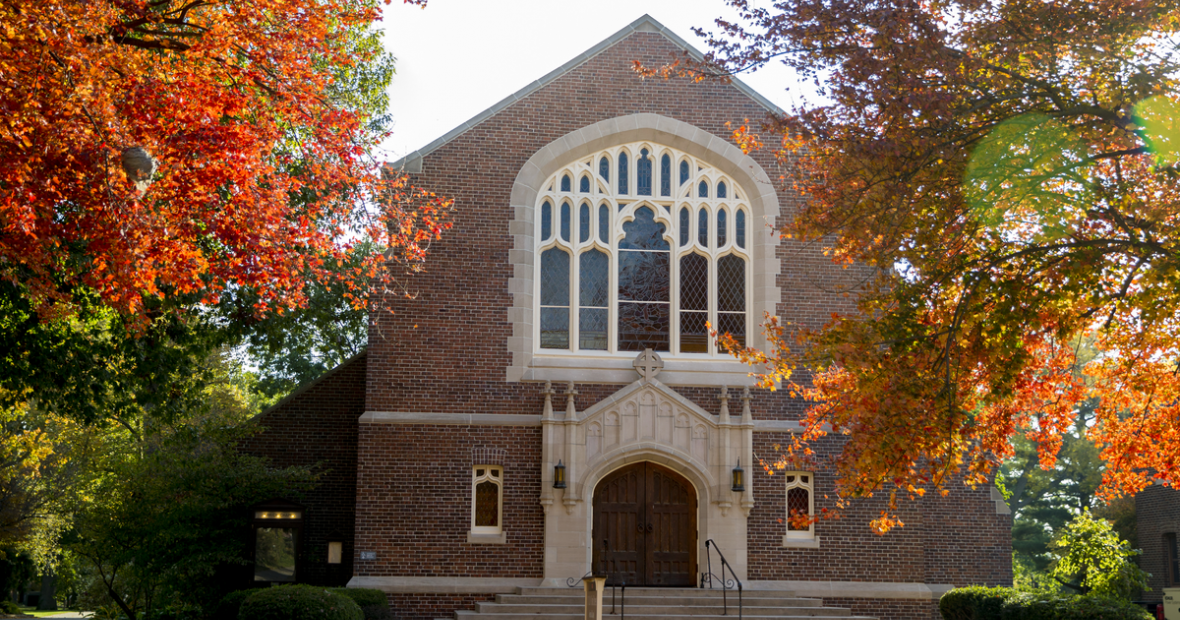 The chapel’s interior exhibits the timber-trussed vaulted ceiling typical of the spacious Perpendicular Gothic style. Also characteristic are the high clerestory windows, which admit more light than is the case in other church styles. Seating about 700 people (630 in the nave and 70 in the balcony), the chapel is in basilica form with a narthex or vestibule on the west, broad nave with a center aisle plus side columns and aisles, and apse at the east end. Above the latter area is a representation in stained glass of William Holman Hunt’s painting, "The Light of the World," and on the west side a rendering of Heinrich Hoffman’s “The Ascension.”

There is a bronze plaque in the vestibule honoring the 11 Congregational ministers who, as the Iowa Band, founded Iowa College in Davenport. A large marble plaque in the northwest corner of the nave contains the names of a number of Grinnell students who, as enlistees in the Union Army, died in the Civil War. Also of interest is the reredos, or carved wooden screen, gracing the space behind the altar. Although its exterior looks solid and strong, with Gothic buttresses on the north and south sides, the chapel structure contrasts with the heavy stone walls and weighty arches and domes of the Romanesque-style Goodnow Hall.

The excellent acoustic properties of the chapel's interior make the building particularly suitable for concerts and recitals as well as for performances on the Aeolian-Skinner organ. Installed in 1948, the organ contains 4,000 pipes in 66 ranks and is considered one of the finest instruments of its kind in the Midwest. An adjunct of the organ is the Ethel L. Jones carillon, a Schulmerich instrument that rings out over the campus at every commencement, reunion weekend, and other occasions. Services are held each Sunday and at other times in the chapel, and it is also the site of lectures, panel discussions, and other activities. The building has undergone two renovations with accompanying rededications in 1949 and 1980.

Herrick Chapel is located on Park Street across from 7th Avenue. On-street parking is available nearby. Accessible parking is located in the lots behind Macy House and Harry Hopkins House.

North of Steiner Hall is Herrick Chapel, a building that defines the very character of Grinnell College as a liberal arts institution. Founded as a Congregational school, Grinnell in its earlier years combined traditional religious values with social outreach in such a way that the missionary spirit of the 19th century was easily transformed into the public service orientation of the 20th. The two impulses were evident in the planning of the chapel and its adjacent building, Steiner Hall, which originally housed student service associations (YMCA and YWCA). Designed in the Perpendicular Gothic style marking many church and academic buildings in England, Herrick Chapel was dedicated on May 19, 1907. It was named for Stephen Leonard Herrick, an early settler in Grinnell who was a local merchant and trustee of the College. The building’s architect was William H. Brainerd, an 1883 graduate of Grinnell who was the principal partner of Brainerd, Leeds, and Russell of Boston, Mass.