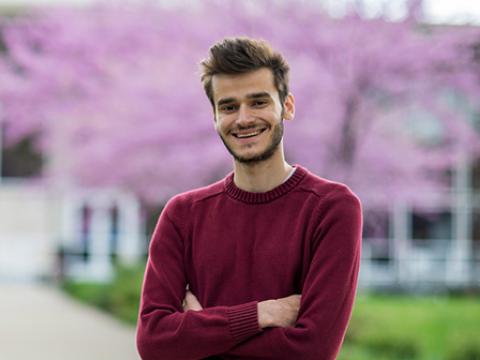 I would definitely credit that experience with helping me to have a persuasive application and making me want to do this type of work.

Originally from California, political science and economics double major Nathan Calvin ’18 never would have predicted that a summer spent in Lincoln, Nebraska, would prove pivotal to his academic career. But under the enthusiastic and expert mentorship of Amy Miller ’93 at ACLU Nebraska, Calvin was able to get his first taste of effecting real-world change.

Calvin’s summer research project focused on the high cost of calling home from jail, as well as privacy issues surrounding attorney-client phone calls. It resulted in a bill introduced to the Nebraska legislature with bipartisan support. That bill, prohibiting “excessive commissions and bonus payments” and guaranteeing free calls between attorneys and their clients, was recently passed into law.

“I really feel like this experience is great for a lot of people, not just people who want to go to law school,” says Calvin. “This type of work — working with legislators — is a great experience for anyone interested in research, policy, or criminal justice reform.”

Connecting to Unique Opportunities with Grinnellink

Calvin discovered Miller’s internship offering through a Grinnell program called Grinnellink. Grinnellink matches current Grinnell students with alumni and friends of the College open to providing internships over the summer. It also provides grants to offset costs of food, transportation, and housing for students that secure full-time, unpaid Grinnellink internships.

Students also know their host will have an awareness of what a Grinnell student can bring to the table, as well as instant common ground and access to the Grinnell alumni network. Of working with Miller, Calvin says, “It’s really hard to imagine anyone taking their intern having a good experience more seriously. She’s not just a great boss, she’s a great mentor and friend, and I definitely think the Grinnell connection played a part in that.”

Miller has been offering the ACLU Nebraska internship every summer for over 15 years, and the spot is highly sought after by students. “When I applied the first time, I didn’t get it, and I was very discouraged — I almost didn’t apply again,” says Calvin. “I am very very happy I applied again.”

For her part, Miller says that there is one key thing that helps successful applicants stand out from the rest: passion. Since Miller’s interns are put on the front line of ACLU Nebraska’s work, they will need to do things that “can be kind of distressing,” she says. So when an applicant names a particular passion and what is driving that passion, “it says to me that passion will probably carry them through the harder parts of the internship.”

After Calvin was rejected, he spent the summer interning for another organization, building experience and getting a better understanding of the type of work he wanted to do and why. His hard work paid off — the following year, Miller selected his application.

Miller’s internship is highly competitive for a reason — as one of just three lawyers working for ACLU Nebraska, she values her interns’ time and skills. Rather than assigning them menial tasks, she lets them take the lead on important projects.

“Amy made it super engaging — even though I didn’t come in with a clear idea of exactly what I wanted to do, there was tons of stuff to do all the time,” says Calvin.

“It boggles my mind that there are internships that don’t fully embrace the opportunity that a talented, intelligent Grinnell student brings to the table,” says Miller. “I don’t need someone to go get me coffee — I can get my own coffee — but I do need help doing the substantive research that takes a lot of focus that I don’t have the time to do.”

Calvin was given a couple of options to pursue when he got to the ACLU office, but the issue of the expense of phone calls from county jails quickly stood out as the most pressing. Calvin called every county jail in the state, compiled a spreadsheet of statistics, corresponded with partner organizations to get examples of reforms in other states, and called people with incarcerated loved ones willing to share their stories. He then wrote a report and took it to the Nebraska Legislature.

“I assumed that ACLU wouldn’t be very influential with the conservative state house,” says Calvin. However, he was pleasantly surprised when he learned that ACLU actually had a good track record of making progress with the Nebraska Legislature.

Calvin was able to experience this firsthand with his own report. He discovered allies in the libertarian senators, “who actually take things like the state harming people in prisons and the criminal justice system pretty seriously.”

“I went with Amy and presented the report I’d written to Senator McCollister and he said he was going to look at it.” After that, Miller and the ACLU team worked with McCollister to turn the report into legislation.

“I watched a live recording of the committee hearing and it’s really amazing seeing the report that I had helped write handed out to every committee member,” says Calvin.

Calvin’s internship with ACLU Nebraska was not only a memorable learning experience in its own right — it also solidified his resolve to go to law school. “Amy wrote me a recommendation letter for law school and I wrote my applications, in large part, about my experience [with ACLU],” Calvin says. “I would definitely credit that experience with helping me to have a persuasive application and making me want to do this type of work.”

Calvin graduated from Grinnell a semester early, in December 2017. He has been accepted at Stanford Law School, but will defer admission for a year to work on artificial intelligence ethics issues at Oxford University’s Governance of AI Institute.