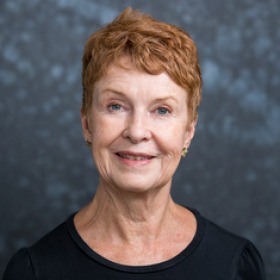 At Grinnell, she has directed plays ranging from international classics like Monzaemon’s Fair Ladies at a Game of Poem Cards, The Recruiting Officer, and The Beggar’s Opera, to contemporary classics dealing with otherness or marginality, like David Edgar’s Pentecost, Brian Friel’s Translations and Dancing at Lughnasa, and Lee Hall’s The Pitman Painters.  Adaptations and devised work include Broken Mirrors, devised from three Salman Rushdie stories, Balancing Acts, devised from ethnographic interviews with students (from Grinnell town/college interviews about work after the 2008 financial crash) and imPASSe, with students and choreographer Shawn Womack.   Her particular directing interest is in cutting-edge British plays on contemporary issues, frequently as US premieres.  These include David Edgar’s Testing the Echo (Islam in Britain post 7/7), Adam Brace’s Stovepipe (soldiers turned private security contractors in Iraq), and the adaptation of Steve Waters’ landmark climate change play, The Contingency Plan, from the BBC Radio 4 version.  Recently, she adapted Nick Payne’s Constellations for four sets of gender-fluid characters, and directed Elinor Cook’s Image of an Unknown Young Woman, about the uses of viral internet images set against the background of revolution, and Caryl Churchill’s Love and Information.

Lesley’s recent performance-as-scholarship has focused on site-specific urban performances and immigrants in the metropolis. Beginning her international devising work in Mumbai with slum-dwelling artisans to address the critical issue of water insecurity, her theatre practice has extended to marginalized women’s NGOs in New York and London.  Recently, she has created professional and community productions in London that include Pursuing Justice for Women Against Rape and the English Collective of Prostitutes, Uncomfortable Conversations for FORWARD (an African women’s group combatting FGM), and I am Here for IKWRO (Iranian and Kurdish Women’s Rights Organization, against forced marriage and honor killing).  She has begun collaborations with the NGO Unchained in New York and Iceandfire Theatre Company in London. With Grinnell students, she has created an iteration of the British Fun Palaces Project, and she has served as Scholar-in-Residence for the Theatre Royal Stratford East’s London Home Theatre Project (thirty plays devised in one week for residents, taking place simultaneously in homes across London as a snapshot of the metropolis).   Her play, Pursuing Justice, which attracted positive critical attention in a single-night fundraising performance in 2015, is slated for a performance run at Etcetera Theatre, London, in November 2019.

Lesley’s recent published scholarship has addressed the effects of community performance in public spaces. “Performing Public Presence: African Women Create Uncomfortable Conversations in London” is forthcoming in Theatre Research International.  Lesley’s interest in public performance is also reflected in her convenorship of the Performance in Public Spaces Working group of the International Federation of Theatre Researchers’ conferences from 2016-18.