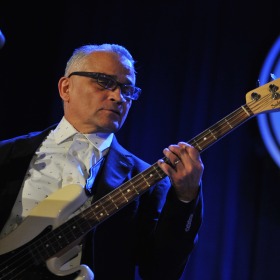 Gabriel Espinosa was born in Merida, Mexico. His love of music began at a very young age. With the help of his mother he began playing the guitar at the age of six.

By the age of fourteen, along with his brothers Victor and Patricio, Gabriel performed with their group “Los Deltons”, where he played bass guitar.

In 1992 Gabriel attended the University of North Texas in Denton, TX where he received his Masters degree in Jazz studies in 1995. While studying at UNT Gabriel was also a part of the UNT Jazz Singers. Along with his studies Gabriel produced several albums for Mexican artists including, Armando Manzanero.

In 1996 Gabriel returned to Central College in Pella, IA, where he became Director of Jazz Studies. He not only directed the jazz band and taught private music lessons but also started the “Vocal Combos” music program, which has been very successful. In 2004 Gabriel became the Director of the Latin American Ensemble at Grinnell College. With his return to Iowa also came the return of his band “Ashanti”.

In the years that followed “Ashanti” recorded three albums, which include “En Fuego,” “Sin Fronteras,” and “Dyos Bo’otik,” as well touring in venues all over the Midwest and Mexico. Ashanti has had many guest musicians including, Alex Acuña, Anat Cohen, Gil Goldstein and Dave Samuels among others.

In January 2008 Gabriel celebrated his 40 years in music. On January 7,2008 Gabriel had the opportunity to present his band “Ashanti Mundo” at the “Teatro Jose Peon Contreras” in his native Merida, MX. His concert with “Ashanti Mundo” featured Berklee alumni and close friend George Robert on sax, Edsel Gomez on piano, Claudio Roditi on trumpet and Tim Crumley on drums.

In August 2008 Gabriel presented a concert with the “Doctors in Jazz” in Avigliana, Italy featuring George Robert on sax, Francis Coletta on guitar, Maria Rusca on piano, Riccardo Fioravanti on bas and Sangoma Everett on drums. From August 31 to September 3 Gabriel was a guest vocal professor for the “Due Laghi Jazz Workshop” in Avigliana, Italy.

In July of 2010 Gabriel presented the music of his “From Yucatan to Rio’ CD at the Iowa City Jazz Festival together with: Helio Alves, Adriano Santos, Alison Wedding,  Jim Snidero , Paul Meyers and Tim Crumley

In May of 2011 Gabriel  and Hendrik Meurkens recorded a CD entitled “Celebrando” together with: Antonio Sanchez, Anat Cohen, Alison Wedding, Misha Tsiganov, Mauricio Zotarelli and Jim  Seeley.  In March of 2012 the group had a CD release concert at the Pella Opera House. The CD was released worldwide in April 2012. In May 2012 the group was invited to participate at the Allegro Convention in Portland, Oregon. In November 2011, Gabriel had the opportunity to perform in two concerts with Canadian jazz singer Carol Weslman and in November 2012, Gabriel played two concerts with French jazz singer Cyrille Aimee.

During 2012 the CD “Celebrando” spent 26 weeks in the JazzWeek charts ending at #25 on the list of the best CDs of 2012.  JazzTimes and Downbeat had great reviews of ‘Celebrando” as well as other important jazz websites like “All About Jazz”. The Summer of 2013 the group performed live shows in Iowa, New Jersey and at the Dizzy’s Coca Cola (Lincoln Center) in New York city.

In March of 2014 Espinosa and Merukens recorded their new production “Samba Little Samba”. The CD came out the month of October of 2014.

In October of 2014 Gabriel was awarded a recipient of the Hall of Fame by the Greater Des Moines Community Jazz Center in Des Moines, Iowa.

In November of 2014 Espinosa presented de music of his new CD “Samba Little Samba” at the Festival de la Cultura Maya in Merida , Yucatan Mexico. Also in January of 2015 Espinosa and Meurkens presented a concert at the Tucson Jazz Festival.

Gabriel and Hendrik Meurkens had a CD release at the Iridium in New York City on August 2, 2015. They also performed at the Riviera Maya Jazz Festival on November 26, 2015.

Gabriel presented a concert with Antonio Sanchez and Anat Cohen at Grinnell College on Feb/2016.

On October of 2016 Gabriel released his fourth solo CD, “Songs of Bacharach and Manzanero” with special guest (seven time Grammy nominee Tierney Sutton). The band had  a CD release concert in Merida, Mexico on January 19,2017. The group also had  a CD release at “Noce” in Des Moines, Iowa on March 9 & 10/2017.

On February, 1 of 2018 Gabriel and Tierney presented their project in Kauai, Hawaii.

On March and August of 2018 Gabriel was a special guest with the Latin Jazz Band Ashanti in Des Moines, Iowa.

Gabriel will be releasing his fifth solo album this fall of 2018. Gabriel Espinosa “Nostalgias de mi Vida” with special guest Kim Nazarian. Gabriel and Kim will be presenting this project in Merida, Mexico and Des Moines, Iowa at the beginning of 2019.