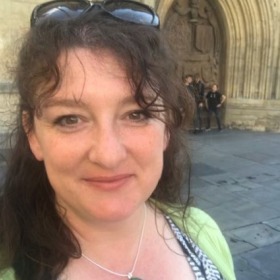 Carolyn Herbst Lewis joined the faculty at Grinnell College as an assistant professor of history in 2013. Lewis has a Ph.D. in American women’s history with a concentration in Women’s Studies from the University of California, Santa Barbara. As an undergraduate, Lewis studied in the Honors Tutorial College at Ohio University, completing a B.A. and a certificate in Women’s Studies. Lewis also earned an M.A. in American history at Ohio University, studying at the Contemporary History Institute. Professor Lewis has been the recipient of many awards for teaching and scholarship, including a postdoctoral fellowship from the American Association of University Women, a Woodrow Wilson Women’s Studies Dissertation Fellowship, and the Judith Lee Ridge Article Prize from the Western Association of Women Historians for an article that appeared in the Journal of Women’s History in 2005. Prior to coming to Grinnell, Lewis was a faculty member at Louisiana State University in Baton Rouge.

Professor Lewis is a specialist in the fields of American women’s history and the histories of sex, sexuality, and medicine in the United States. Lewis’ first book, Prescription for Heterosexuality: Sexual Citizenship in the Cold War Era (Chapel Hill: University of North Carolina Press, 2010, 2013pb), considered the definitions of sexual health crafted by the American medical profession in the postwar decades. Lewis also has written about the history of American obstetrician Joseph Bolivar DeLee and the Chicago Maternity Center (formerly the Chicago Lying-in Hospital and Dispensary). “The Gospel of Good Obstetrics: Joseph Bolivar DeLee’s Vision for Childbirth in the United States,” was published in the journal Social History of Medicine in 2015, and a second article, “At Home, You’re the Most Important Thing: The Chicago Maternity Center and Medical Home Birth, 1932-1973,” was published in the Journal of Women’s History in 2018. More recently, Lewis has studied the history of swinging and non-monogamous heterosexuality in post-WWII America. In the past, she has written for the scholarly blog, Nursing Clio, which she co-founded in 2012.

Currently, Professor Lewis is exploring the history of herbalism. A trained herbalist, she is compiling a digital oral history archive in order to document the persistence of women's knowledge and healing traditions in the twentieth and twenty-first centuries.

Professor Lewis teaches courses in American women’s history, sex and sexuality in American history, the history of medicine in the United States, and Cold War America. Students in her classes work with a variety of digital tools, including blog posts, digital story-telling, and podcasts.