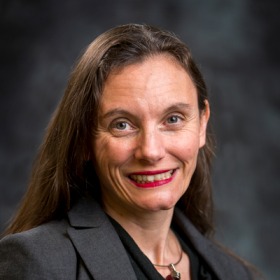 Danielle N. Lussier is an associate professor of political science. Her research focuses on democratization, political participation, and religion and politics, with geographic expertise on post-communist Eurasia and Indonesia.

She is the author of Constraining Elites in Russia and Indonesia: Political Participation and Regime Survival (Cambridge University Press, 2016) and co-author (with Mohammed Ayoob, Michigan State University) of The Many Faces of Political Islam Second Edition (University of Michigan Press, 2020). Her scholarship has been published in Journal of Democracy, Politics & Religion, Problems of Post-Communism, Post-Soviet Affairs, and Slavic Review, as well as in several edited volumes. Based on extensive fieldwork in Yogyakarta, Indonesia and an original survey in the region, Lussier is developing a book manuscript on the role of houses of worship in the political lives of Muslims and Christians in Indonesia. Her research has been supported by the Global Religion Research Initiative, the Kennan Institute, and several programs at Grinnell College.

Lussier teaches courses on Russian politics, democratization and regime change, Islam and politics, and comparative politics. An enthusiast of both quantitative and qualitative methodological approaches, Lussier emphasizes the development of research skills in all courses. In addition to the political science department, Lussier actively participates in the Russian, Central European, and Eurasian Studies concentration, where she regularly oversees capstone research projects and other curricular opportunities to integrate the study of foreign language across the curriculum.