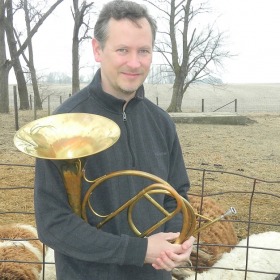 Eric McIntyre maintains careers as a conductor, composer, instrumental performer, and educator.  At Grinnell College he teaches music composition courses and directs the Grinnell Symphony Orchestra.  He also contributes to Grinnell's Liberal Arts in Prison Program, for which he has presented lectures, taught credit-bearing courses, and conducted several performances of the Grinnell Symphony at Newton Correctional Facility.  His current research interest involves the teaching of music listening skills among incarcerated populations.

McIntyre is Music Director of the Central Iowa Symphony in Ames and has served as the leader of the brass program for the Swakopmund Musikwoche festival in Swakopmund, Namibia.  His past music director positions include the Fort Dodge Area Symphony, Ottumwa Symphony, and the new music ensemble AURA.

McIntyre's original compositions have been performed around the world by a wide array of performers and received support and awards from ASCAP, the Iowa Arts Council, the American Music Center, and the National Endowment for the Arts.  Equally adept as a hornist, McIntyre was a member of the Houston Ballet and Houston Grand Opera Orchestras and has performed with the Houston Symphony, Des Moines Symphony and Orchestra Iowa.

McIntyre received B.M. and M.M. degrees in music performance at Indiana University where he was also awarded the prestigious Performer’s Certificate. He then attended the European Mozart Foundation academy in Kraków, Poland, and later earned a Doctor of Musical Arts degree in music composition from the University of Houston Moores School of Music.

Beyond his activities as a scholar and musician, McIntyre is a small-scale farmer and amateur butcher.  He and his family raise turkeys and dairy goats and grow and process much of their own food on their farms outside Grinnell.