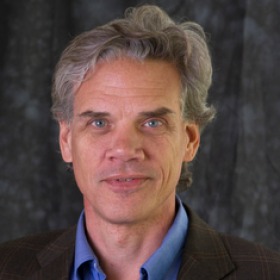 John Rommereim is Blanche Johnson Professor of Music at Grinnell College, where he conducts the Grinnell Singers and the Grinnell Oratorio Society, and teaches composition. His choral works have been performed by distinguished ensembles across the U.S., including Magnum Chorum, the Princeton Singers, VocalEssence, Voces Novae, Roomful of Teeth, and The Rose Ensemble, for whom he served as 2008-09 composer-in-residence. The New York Times praised the “richly expressive” character of his work for voice and piano, Into the Still Hollow (2006).  In addition to his numerous choral works, Dr. Rommereim has composed a chamber opera, songs, electronic music, and works for piano, organ, guitar, flute, saxophone quartet, brass quintet, and string quartet. He also regularly performs improvisatory music as a pianist together with jazz saxophonist Mark Laver (sample recording) . In 2014, his chamber opera Rheingold (video trailer) was premiered in Taipei and performed for capacity crowds; this work, a collaboration with Craig Quintero and his Riverbed Theatre Company, was part of a unique commission project by the Taiwan Ministry of Culture for new works designed to reexamine and re-envision each of Wagner’s four Ring operas.

Rommereim’s choral/orchestral work Utopia (2000) was premiered with the Prague Radio Orchestra and the Grinnell Singers, and his choral cycle Convivencia (2006) (audio sample), a six-movement work for choir, string quartet, and harp, based on ancient love poetry from Jewish, Islamic, and Christian traditions, was premiered by Voces Novae, of Bloomington, Indiana, at a special event co-sponsored by Jewish, Muslim, and Christian organizations. He is the recipient of commissions and grants from the National Endowment for the Arts, the American Composers Forum, the Iowa Choral Directors Association, the Iowa Composers Forum, and the Iowa Arts Council. He is the 2006 winner of the  Welcome Christmas carol contest sponsored by VocalEssence.

He has conducted the Grinnell Singers on concert tours across the U.S., and in Estonia, Finland, Russia, the Czech Republic, Bulgaria, Romania, and Turkey. The ensemble has been invited to perform at two regional ACDA conventions. The Grinnell Singers have recorded Rachmaninov’s All-Night Vigil, (sample track) as well as a CD with Jonathan Dove’s The Passing of the Year as its centerpiece (sample track). One of the ensemble’s trademarks is Thomas Tallis’s 40-voice motet, Spem in alium, (sample recording) which they have performed in six different seasons.

During his early years at Grinnell College, Rommereim founded a professional early music ensemble, the Baroque Orchestra of Iowa, which employed some of the country’s finest baroque specialists. He performed frequently as a harpsichordist, playing continuo in various chamber ensembles, appearing as soloist in J. S. Bach’s Fifth Brandenburg Concerto, and recording a CD of Boismortier’s op. 91 Sonatas for flute and obligato harpsichord that is available on the Centaur label (sample track). His translation of Pavel Chesnokov’s seminal treatise, The Choir and How to Direct It is published by Musica Russica. Rommereim is also recognized as an accomplished singer. He has performed all three of Schubert’s song cycles, and he has appeared as baritone soloist for choral/orchestral works such as Beethoven’s Ninth Symphony, Brahms’s German Requiem, Verdi’s Requiem, Vaughan Williams’s Dona Nobis Pacem, Mozart’s Coronation Mass, J. S. Bach’s Cantata 131, “Aus der Tiefe,” and Orff’s Carmina Burana.  He holds the BA degree from St. Olaf College, an M.Mus degree in composition from the San Francisco Conservatory of Music, and a DMA degree in Choral Conducting from the University of Kansas.