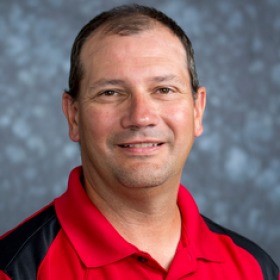 Ted Schultz has been sports information director at Grinnell College since August 2007 after serving the previous 13 years as sports editor of the Clinton Herald in Clinton, Iowa.

Schultz is a native of Denison, Iowa, and attended Northwestern College in Orange City, Iowa, where he graduated with a bachelor’s degree in mass communications while also competing for the Red Raiders’ track and cross country teams. Schultz began his newspaper career at the Atlantic News-Telegraph before moving to the Clinton Herald in 1994, where he stayed until coming to Grinnell College.

He has won numerous statewide writing and composing awards from professional organizations, including the Associated Press, the Iowa Newspaper Association, and the Iowa Baseball Coaches Association Media Award in 2007.

In 2009 he was presented the prestigious News Media Award for Excellence from the Iowa High School Athletic Association, an honor that is essentially the IHSAA’s Media Hall of Fame. An avid bicyclist, Schultz has participated in RAGBRAI (Register's Annual Great Bicycle Ride Across Iowa) 14 times since 2004.

Schultz also coached cross country and track at Clinton High School during his time in that city and in 2003 was named the Iowa state assistant cross country coach of the year.

His wife, Marsha, teaches at Grinnell Middle School and is head volleyball coach and assistant track coach at Grinnell High School. They have two dogs, Archie and Oscar.