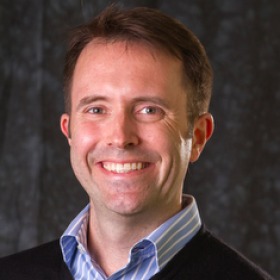 Erik Simpson's literature courses focus on British writing from Shakespeare to the present, especially the literature of the eighteenth and nineteenth centuries. His primary research field is British and transatlantic literature of the Romantic period. He was the Principal Investigator for Grinnell of Digital Bridges for Humanistic Inquiry, a partnership between Grinnell and the University of Iowa funded by the Andrew W. Mellon Foundation, and he is co-chair of the planning committee for Grinnell’s new Humanities and Social Studies Center.

Simpson's first book, Literary Minstrelsy, 1770-1830: Minstrels and Improvisers in British, Irish, and American Literature, was published by Palgrave Macmillan in 2008. This book first analyzes the emergence of minstrels, bards, and other oral poets as objects of sustained literary concern in 1750s Britain. It then traces those figures as Romantic-era writers used them to negotiate ideas of authorship, gender, and nation. The project emphasizes links between men and women writers, between canonical and non-canonical texts, and among works of different genres. The final chapter draws out the project's implications for the study of transatlantic blackface minstrelsy's emergence in the 1830s and 1840s. Material from this book has appeared in article form in ELH and European Romantic Review.

Simpson's second book, Mercenaries in British and American Literature, 1790-1830: Writing, Fighting, and Marrying for Money (2010) was published in Edinburgh Studies in Transatlantic Literatures from Edinburgh University Press. This project analyzes the ways in which writers in Britain and the United States explored new possibilities of professional authorship by portraying mercenary writers, fighters, and lovers. Writers of central interest include Charles Brockden Brown, Charlotte Smith, Jane Austen, Walter Scott, Lord Byron, and James Fenimore Cooper. An article based on this project appeared in Studies in Romanticism.

A more detailed account of Simpson's research is available on the Minstrelsy and Mercenaries pages of his website. His interests in computer programming and the use of technology in humanistic inquiry have led Simpson to create Connections: A Hypertext Resource for Literature, which contains his online teaching materials along with other information, and other web projects described on this page.