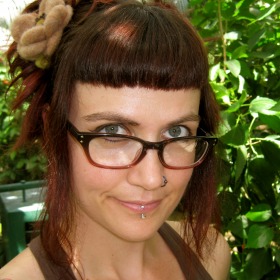 Living in Colorado helped me develop an intense appreciation for the outdoors. I have spent the last few summers backpacking in places like Iceland and Alaska. Next time I’ll go somewhere warm!

Research
In graduate school, my dissertation took me into the field to study “Heathenry”, pre-Christian Northern European paganism. I spent a great few years hanging out with Heathens in their homes, at rituals, in interviews, at coffee shops, and at retreats in the mountains, collecting data and making friends. I realized that how we do Heathenry varies from coast to coast, and their friendships with other Heathens, memberships in organizations, use of the internet and mode of participation influences their myriad versions, understandings, and Heathen practices. I also realized, over time, that people’s religious interpretations were intimately connected with their socio-political contexts and beliefs, and how various ideological assumptions influence their beliefs on how Heathenry should be practiced, or who can practice it. My resulting book, published by Temple University Press, is a study of the relationship between individual and collective identity. Heathenry, like all religions, is an expression of “the political” at the same time that it offers a competing worldview to participants embedded in various postmodern contexts. At one level, it examines the meaning of gender, race, and ethnicity within Heathenry. At the same time, I explore how heathens interpret, take on, and modify these meanings in the everyday practice of their chosen beliefs, and how these beliefs and practices have sociopolitical implications and consequences for Heathens and other practitioners of new religious movements. I investigate how individual practitioners accommodate to and resist the lore of an ancient religion that has no living authority, and how practitioners negotiate and struggle to maintain collective identity in the face of structural pressures, political ideology, and both mainstream and alternative religious definitions. In addition, I examined the essential role of the internet in reviving and popularizing Heathenry. Thus, at the broadest level, my project sheds important light on the co-constitutive relationships between people and culture, self and society. It examines the strain between distinctiveness and sociocultural influences that are both vital aspects of a person’s identity. See more here, at American Heathens: The Politics of Identity in a Pagan Religious Movement

In the Fall, I will be teaching a cross listed course with Religious Studies titled “Witches, Druids & Heathens: Exploring Paganisms in the United States,” in which we will examine American Paganisms as case studies which illuminate various sociological processes.

“Reconsidering Heathenry: The Construction of an Ethnic Folkway as Religio-ethnic Identity,” Nova Religio: The Journal of Alternative and Emergent Religions 16.3 (February 2013): 52-76