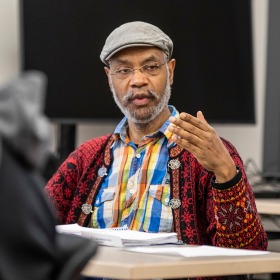 Jean-Ulrick Désert sees potential for creativity all around him: “Whatever our discipline, whether we're engaged in the spoken word or the visual arts or science...there’s creativity possible in the everyday things. It’s just a matter of being able to listen, to see, to hone in on, I guess what some people would call intuition,” he says.

It’s something we could all afford to do a little more often, but it might also be a necessary antidote to the current ugliness of our world.

For Désert, art is a serious undertaking — not a leisure activity, but a heavy responsibility, of which he says:

“My tools may not be like that of a surgeon with a scalpel, and yet I can create work that can cut as deeply and as emotionally, and perhaps create damage as well. So that responsibility should be taken extremely seriously.”

It’s a great responsibility, true, but it’s also a gift and a tool for empowerment — a tool that came in handy after Désert became the victim of a racially motivated attack in Germany. To process the trauma of the event, he made a stereotypical German outfit, but with some tweaks, to superficially appear like an “acceptable” German body. All dressed up, and with a cow bell dangling around his neck to gently alert people to his presence, Désert made his way throughout Germany on an open-ended train ticket. Along the way, he asked people to take pictures of him, allowing him to see himself through their eyes.

The project certainly aroused reactions. For some people, laughter was the response, which Désert saw as an awkward mechanism of avoidance. For others, his presence made them hunker down and get even more entrenched in their beliefs. Is Desert working to change those beliefs? Not directly.

“I don’t see my work as functioning as a full-out agent of change,” he says, “but I can see that my work can plant certain seeds and that those seeds may take years to sprout.”

Check out Désert's piece, “The ABC's of My Private Life”

Désert visited Grinnell earlier this spring, before coronavirus threw us all for a giant loop, and led a workshop with students. He enjoys teaching and working collaboratively “to empower students to learn how to fly or fly better themselves.”