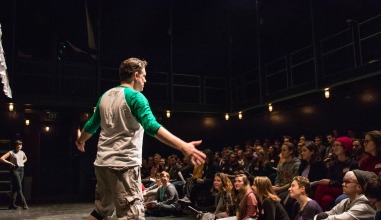 We rupture the infamous “fourth wall” of theatre, going behind the scenes with Rob Neill ’91, founding member of the New York Neo-Futurists, to discuss their unique brand of performance, which lies somewhere between improv, sketch comedy, and avant-garde theatre. The Neo-Futurists were on campus this semester to perform their show, “The Infinite Wrench,” which features a race against the clock of 30 plays in 60 minutes. Historically, futurists were mostly Italian and Russian philosophers and artists, mostly active around the turn of the 20th century, who sought to create a new relationship with the audience. The Neo-Futurists embrace some of their principles, but also deviate in important ways. What they do maintain is putting on a unique and chaotic spectacle of a show. The Neos also led a workshop the next day, and the students involved in the workshop thoroughly enjoyed the opportunity to practice a different way of thinking and being. The Neo-Futurists encourage vulnerability and facilitate the sharing of intimate experiences in a powerful way. To get a better idea of what they’re all about, check out some of their videos and sketches online. 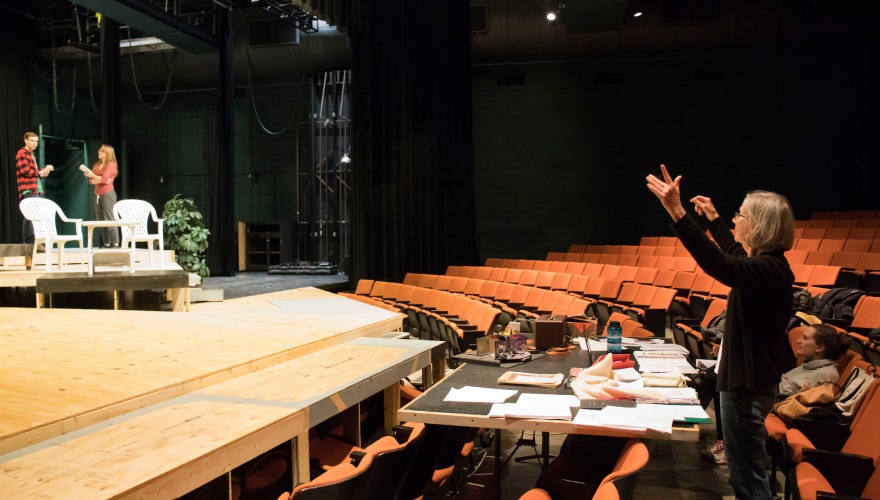 Then, we take a turn from the world of non-illusory theatre to a more traditional theatrical experience. The most traditional, perhaps. We talk with Ellen Mease, professor of theatre and dance at Grinnell, about Shakespeare’s Twelfth Night, which Mease directed this semester. The show is dedicated to Ed Moore, Grinnell’s great Shakespearean-in-residence, who passed away last year. Mease shares her memories about what Grinnell’s theatre has meant to her, 40 years after she first directed her first production of the show.