Destruction and Rebirth: The Cyclone of 1882

It was the night of June 17, 1882. Miles away from Grinnell, a storm was brewing. Two tornadoes formed, one from the southwest and one from the north, intersecting near Eighth Ave. and Broad St. The destruction that ensued, and the reconstruction of the town and College that followed, has left its mark on the Grinnell to this day. Thirty-nine people died as a result of the tornadoes, including two College students, Bingham Burgett and Burritt Chase. Dozens of homes met their fate as well, and both of the College’s buildings, Central College and West College, were destroyed. 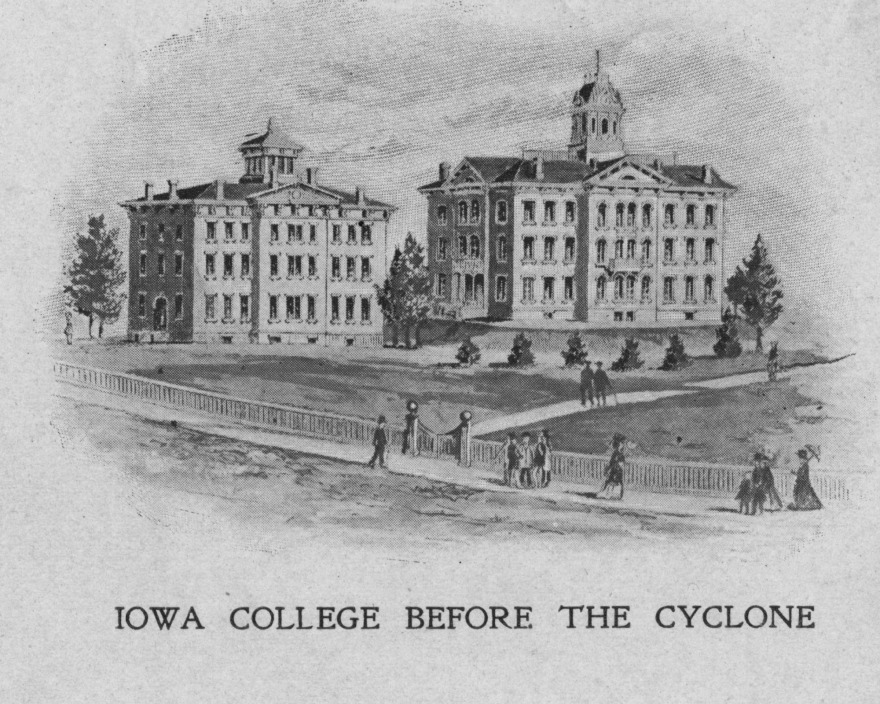 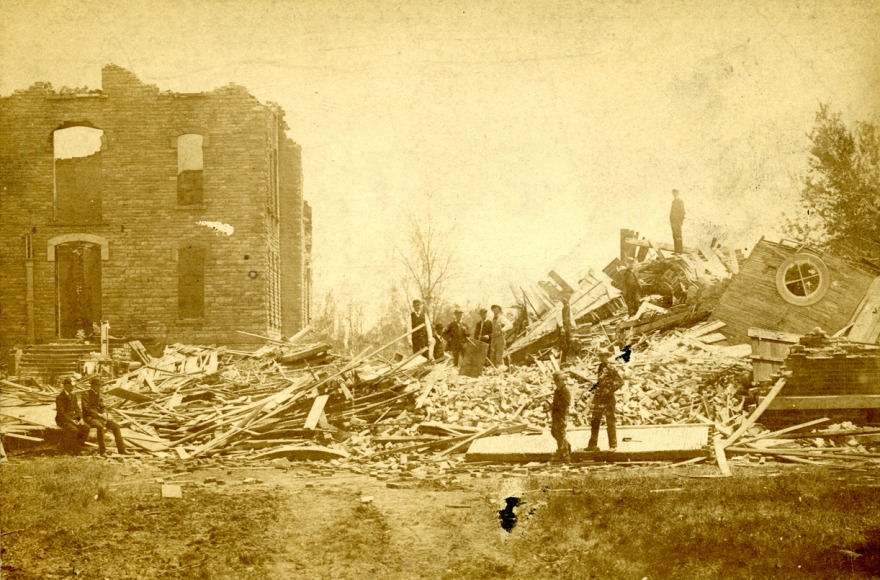 After the dust had settled, J.B. Grinnell set out to raise funds for the recovery process. After already having moved once from Davenport to Grinnell, Iowa College, as it was still called, could have easily folded after the devastating storm. The College incurred approximately $80,000 in damages, and its insurance policy only covered about $10,000. After an account of the storm appeared in Harper’s Weekly, and Grinnell visited the Chicago Board of Trade, donations came pouring in from all over the country. Although it might be a little insensitive to call the cyclone a “windfall” for the College, as Grinnell did years later, the College and town did recover and rebuild stronger than before. Alumni Hall, Blair Hall, and Chicago Hall were all constructed shortly after the cyclone and remained an essential part of campus until they were demolished to make room for the construction of Burling Library.

One prominent physical reminder of the legacy of the tornado that destroyed campus is the annual College yearbook, The Cyclone. The first yearbook was published in 1889 with the following introduction:

“Perhaps you think the Cyclone is misnamed. For its object is not to destroy but to build. But remember, kind friends, that once before a cyclone struck you, and in a moment all was destruction and sorrow, but out of those ruins of seven years ago our college rose to a new life of usefulness and honor, until today we feel that it is stronger for having passed through the storm.”

You can find more images of the destruction on Digital Grinnell.

The Grinnell College Special Collections and Archives offers students and scholars access to printed materials from the 15th century to the present, manuscript collections of individuals and organizations, and historical records of the College and local communities. Books, photographs, scrapbooks, diaries, audio-visual materials, and ephemera provide rich fodder for investigation. Chris Jones works as the archivist of the College, preserving the College’s meaningful history from the basement of Burling Library. We talk with him about what he’s learned about the College through archival work, and discuss new additions to the collection, including over 5,000 items recently acquired from Salisbury House.

Images of Destruction from the Cyclone 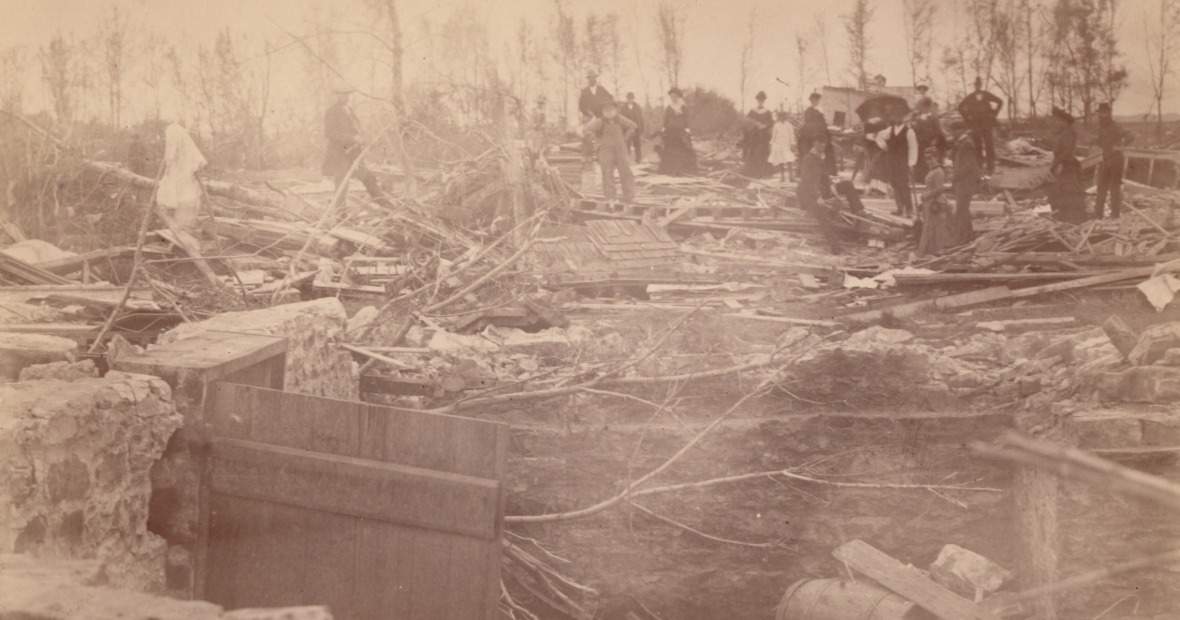 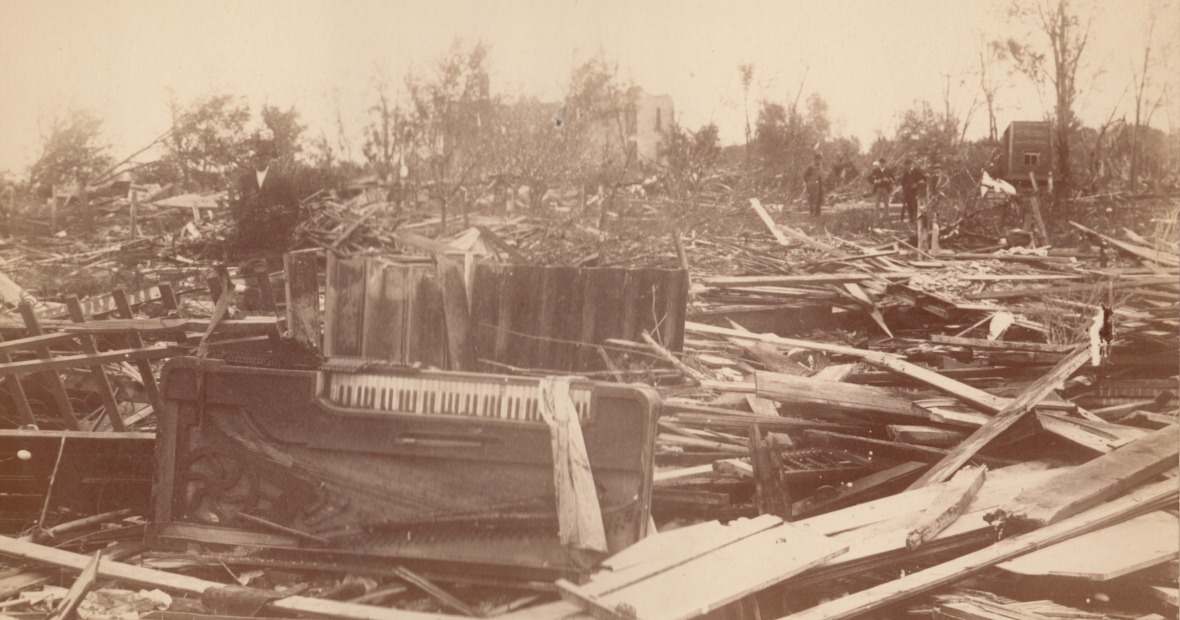 A piano among the ruins. 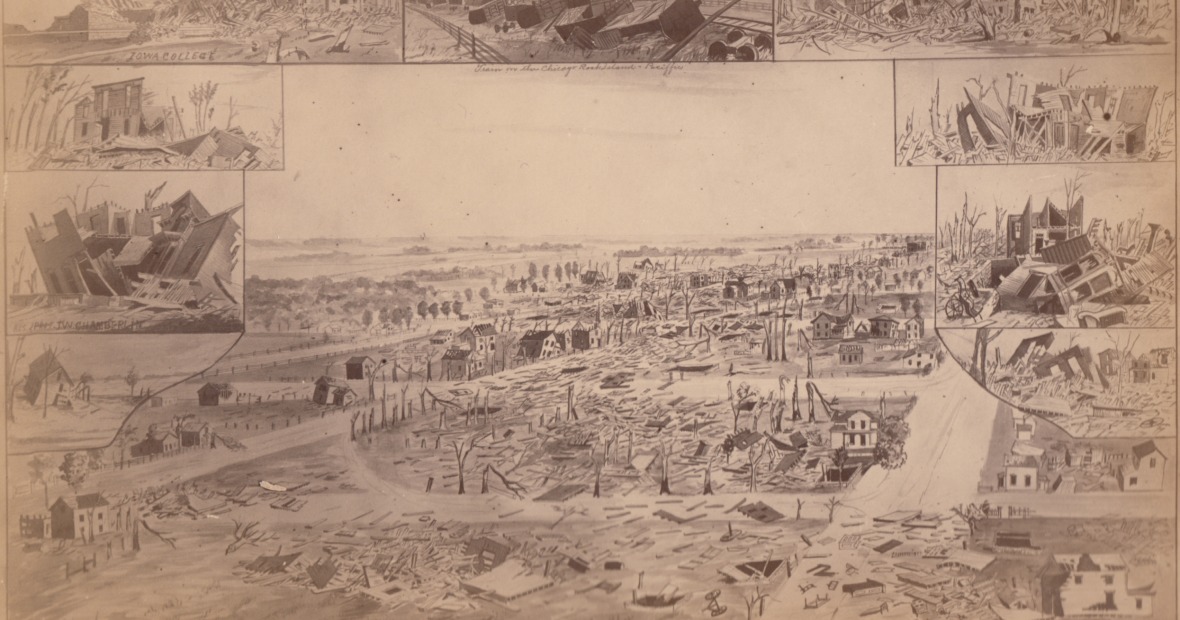 Drawing by A.J. Ricker of the track of the cyclone, looking west. Insets show the residence of Professor J.W. Chamberlin, Iowa College; a train on the Chicago, Rock Island and Pacific railroad; and other ruined buildings. These drawings also appeared on p. 425 of the July 8, 1882, Harper’s Weekly. 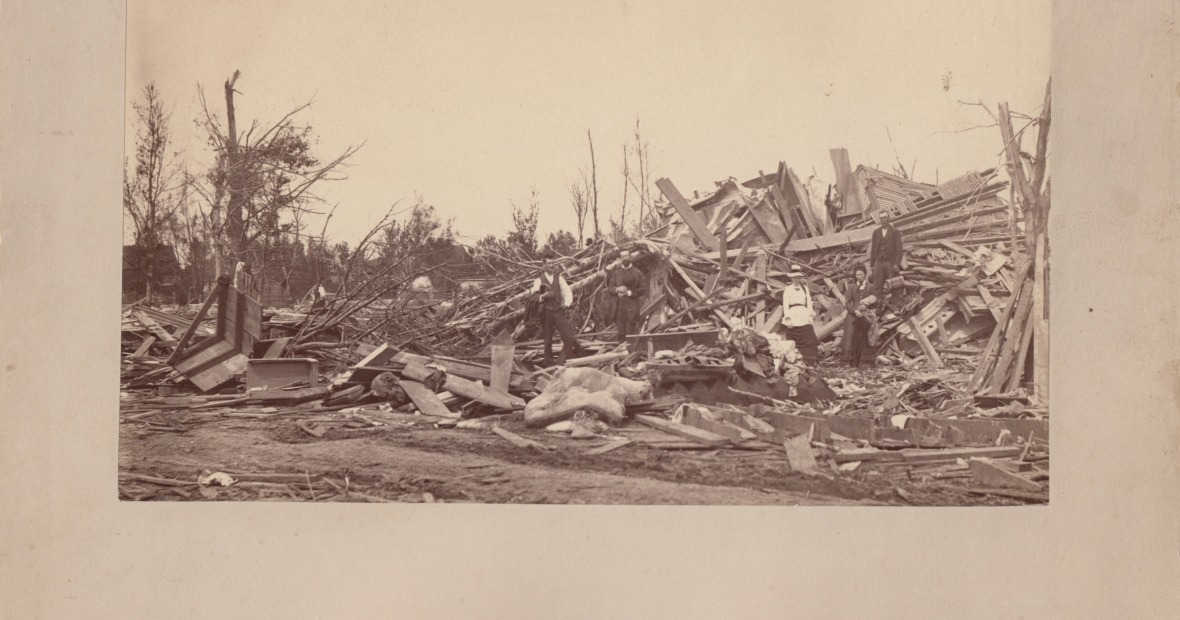 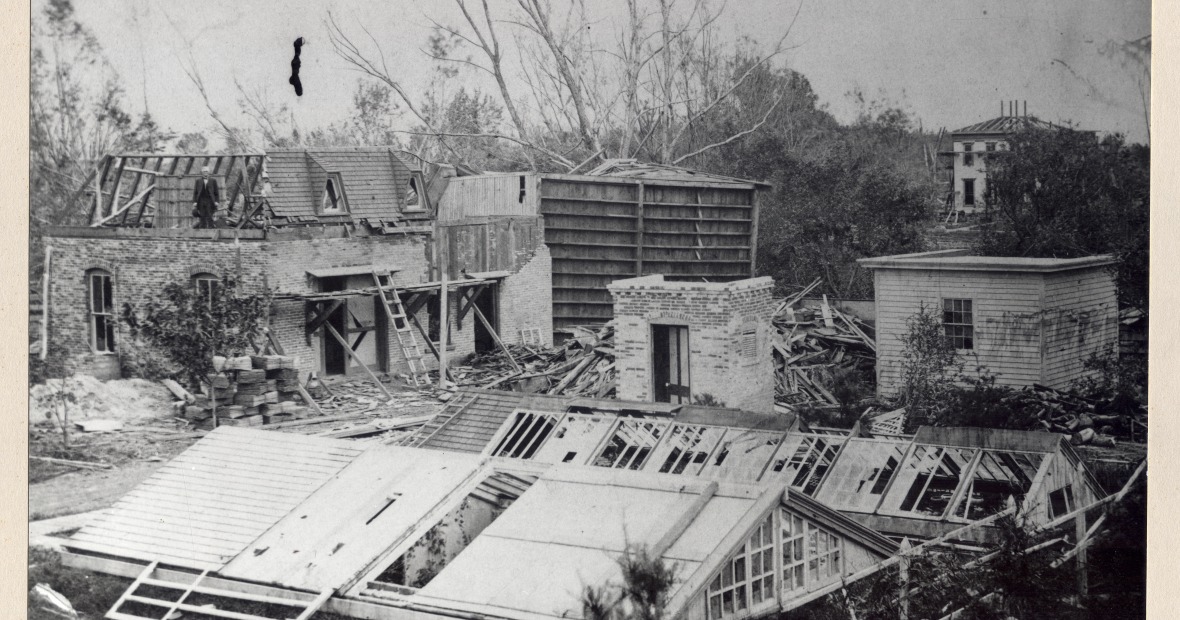 Photograph of a section along Broad Street alley following the cyclone of 1882. The image is looking northeast from Main St. toward Broad St. The debris in the foreground was a greenhouse (corner of Main St. and Sixth Ave.). The large garage with mansard roof belongs to 1120 Main St., the Charles H. Spencer house. Charles Spencer is standing in the rubble. Spencer’s Greenhouse (built to be partially underground) is in foreground of photo.