Just Food for a Just World 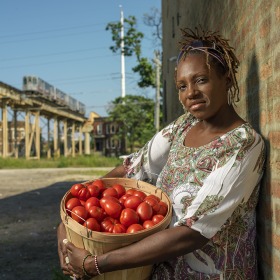 There has never been a fair, just, or healthy food system in the United States of America. So how do we get there? LaDonna Redmond has some ideas. Redmond visited Grinnell in fall 2018 to give a talk titled “Food and Justice: The Commitment To End All Oppression.” She understands that if you want a better world, you’re gonna have to get your hands dirty and work the soil.

Evidence has been accumulating for years and years that this country’s industrial food and agriculture system is deeply flawed, potentially irredeemably so. Redmond has been an activist for a long time — in reproductive justice, violence prevention, and sustainability — but the issue of food justice didn’t come into focus for her until her son, Wade, developed serious food allergies.

Check out LaDonna’s current work with the Abolitionists Challenge

She looked around her neighborhood in Chicago for signs of healthy food and she saw lack: a lack of grocery stores, a lack of fresh produce. But there was no lack of vacant lots, and that’s where she got to work, along with fellow members of the Northwest Austin Council, turning them into gardens for the community.

People dismissed Redmond’s vision as unrealistic, but she was not deterred. When she proposed the idea of farmer’s markets accepting Electronic Benefit Transfer (food stamps), people also told her it couldn’t be done. Refusing to accept “no” as an answer is a common thread for Redmond, she says. “I focus my attention on what I believe to be the right thing, and I do the best that I can with it and most of the time I’m pretty successful with it.”

Another part of her “no” philosophy, which has served her so well over the years, is saying “no” to the term “food desert,” which she abhors and implores people to avoid using. As she says, “It makes absolutely no sense why we make up metaphors that indicate lack.” Additionally, Redmond says, the phrase has been used as a marketing tool to attract big corporations like Walmart to set up shop in communities struggling to access healthy food.

Through her years of work in food justice, Redmond has seen substantial progress in her communities and around the country. More young people, especially young Black people, are interested in growing and learning about food. As Redmond sees it, food justice is an integral part of bigger discussions about ending poverty and oppression, and one cannot be achieved without the other. She says, “We have to start talking about ending poverty. We have to start talking about ending oppression, and then we can see how we can get exploitation out of our food and agriculture system.”

Understanding the nature of exploitation in our food systems is critical to her effort, and that understanding reaches far back into history, back to the beginnings of this country’s economy and its reliance on slave labor, which continues to this day through prison labor. Exploitation is rampant throughout the system, says Redmond. “Many of the workers are exploited, whether they’re picking our food or whether they’re working in factories or in plants, farmers are exploited by corporations. And we don’t like to talk in those kinds of terms, but that’s what it is, it’s exploitation. But exploitation has always been a part of our land and agricultural system.”

Food is more than just exploitation, though. Food is essential to humans as more than pure survival, something which Redmond believes is often lost during discussions about food justice or food security.

Indeed, as Redmond says, “Everything that we do that’s special to us as humans has food involved in some way.” And it’s all connected, in ways that we can’t even imagine.

Redmond also took her fight to the political realm in 2018, as she ran for political office in Minneapolis. She “pushed the issues around eliminating cash bail and not criminalizing poor people because they can’t get out of jail, but just simply writing tickets. We talked about racial equity and I suggested a civilian council on racial equity.” Although she lost the election, she received a substantial 36% of the vote, and pushed the other candidate to acknowledge and care about the important issues of her campaign.

So what do these issues of food justice look like in Grinnell? Well, we’re surrounded by corn and soy fields that tout themselves as feeding the world, but food insecurity remains a problem in Grinnell. Something’s amiss and it’s not just in Grinnell: it’s everywhere. Working to solve these problems can be daunting, but it also means you can make the world a better place by starting wherever you are with the soil beneath your feet.

Resources and action-based information about food and racial justice:

Want to See Food and Land Justice for Black Americans? Support These Groups

1619: A podcast from the New York Times. Episode 2 (The Economy that Slavery Built) and Episode 5 (The Land of Our Fathers, Parts 1 and 2)

Farming While Black: Soul Fire Farm’s Practical Guide to Liberation on the Land

Why Racism is Terrible for Everyone’s Health