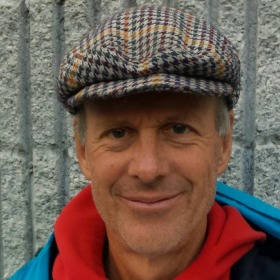 Ed Fallon is a former Iowa legislator that has embraced climate change as his number one policy concern. He is the founder of Bold Iowa, through which he works to raise awareness about the worsening global climate crisis. Fallon’s work takes aim at big corporations that intend to silence the conversations surrounding climate change on a local level. His experience in the Iowa House of Representatives showed him that while we may see the effects of climate change on the ground, there are powerful interests engaged in preventing action on the climate crisis.

Fallon worked as a legislator in the Iowa House of Representatives from 1993 to 2006, where he focused on pressing issues for his constituents: healthcare, housing, and prison reform. Water quality was among the most pressing local environmental issues, but it was not until he left the realm of state politics that he realized the expansive, all encompassing threat that climate change poses.

Despite the lack of sweeping change surrounding climate action, Fallon is hopeful for the future as he sees more and more people realizing their own stakes in the climate crisis. Fallon’s hopeful tones come largely from his engagement with communities throughout Iowa and the country on these issues.

In 2014, Fallon and 35 other climate activists walked from Los Angeles to Washington, D.C., in the Great March for Climate Action. Fallon views walking and marching as an evolutionary instinct and a powerful tool for social change. He sees marching as a way to get the message out and for that message to be taken seriously. “Nobody would care if 35 climate activists drove across the country… it’s not a difficult task.” Fallon argues that The Great March for Climate Change was an important action because it made people respect the work they did, even if they did not agree with their message about climate action. His book, Marcher, Walker, Pilgrim, reflects on the experiences, stories, and lessons learned on the march from coast to coast. 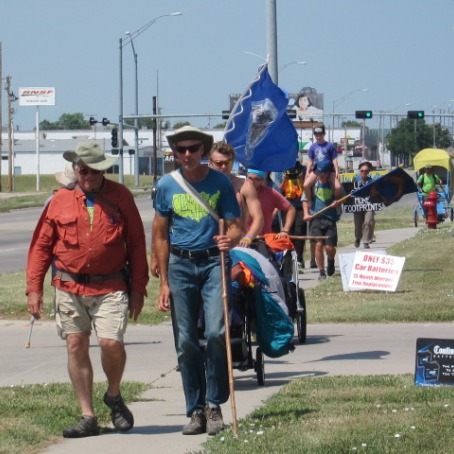 It’s easy to fall into despair about the enormity of the challenges of the climate crisis, but Fallon advocates for action as the antidote to helplessness.

“There’s nothing more empowering than taking action… There are things that are depressing and we should be disturbed about them, but the absolute wrong thing to do is just sit home and worry about them,” he says.

Fallon has continued to embrace action by founding and leading Bold Iowa since 2016. Originally formed as a response to the Dakota access pipeline, Bold Iowa is a coalition of farmers and landowners that seek to defend the rights of Iowa farmers, landowners and indigenous communities, take action to stop climate change, and protect Iowa’s air, soil, and water.

Climate on the Campaign Trail

With the Iowa caucuses in full swing, Fallon and Bold Iowa have been hard at work, seeking to elevate the discussion of climate change as an existential threat and number one priority for the Democratic presidential candidates. He hopes that more and more Iowans will advocate for climate change as their number one issue, so that candidates see it rising in the polls and adjust their platforms accordingly. On his podcast, the Fallon Forum, Fallon talked with a few presidential candidates about the need for action on climate change including Tom Steyer, Joe Biden, Elizabeth Warren, and more.

Although he is not a scientist, Fallon urges that you do not need a degree to realize the massive effects that climate change will bring onto the world. He hopes to inspire people to action. “No matter where you are, there’s an opportunity and there’s an action or set of actions you can take to make a difference.”