On this episode, we welcome Dito van Reigersberg, co-founder of the Pig Iron Theater Company, and the man behind the Martha Graham Cracker Cabaret, an ongoing live show of music, improv, and comedy with the world’s tallest and hairiest drag queen. 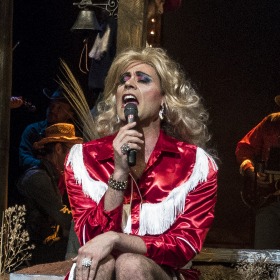 “She’s singing as opposed to lip syncing, which I think actually is another key into vulnerability. I think it’s impossible to sing and not be a little bit vulnerable because it’s your breath creating the sound through your body. I have such respect for lip syncing drag Queens, but it’s just a different mode.”

Here’s a taste of what a Martha Graham Cracker show can look like!

Dito graduated from Swarthmore College in Pennsylvania where he studied theatre. After graduating, he moved to New York, went to acting school at the Neighborhood Playhouse, and attended the Martha Graham school of dance. During his time in New York, Dito recalls seeing drag performer Joey Arias, his first “model of what a drag queen could be.” And so Dito began creating the flirtatious, bold, glamorous persona of Martha Graham Cracker, combining elements of different personas and performance styles. 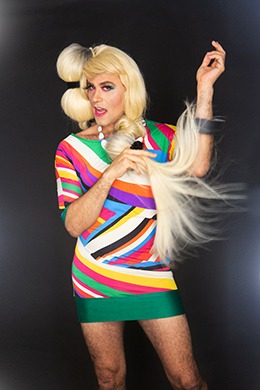 Much like her namesake, there is something undoubtedly vulnerable and tragic about the character of Martha, whose act often centers around unrequited love and endless longing. Dito explains, “One of the rules of a Martha show is that I go out there and I flirt with as many people as I can.” But as a character Martha is also defined by her strength; she commands a room, enchants her audience, and alters the tone and style of her covers to better fit her personality. As Dito says, “We have a very angry version of ‘Let it be’ by the Beatles. ‘Let it be’ where it's like, it’s almost like punk rock or Kurt Vile anger.” Dito says embodying Martha for so long has granted him newfound courage and direction in his everyday life.

Dito and Martha have an uncanny ability to push people out of their comfort zone while giving them a hilarious reprieve from the strangeness of our times. Dito relishes in the audience connection and strives to “make their faces hurt” by opening up with Martha’s combination of comedy and tragic vulnerability.

Especially now, with our heads often plugged into digital technology, Dito believes, “People are hungry for a live body-to-body experience that you can’t get from any other medium.” As the hairy-shouldered, super-singing queen draws audiences in, Martha also pushes people to explore their own individual identity.

Listen to Martha Graham Cracker’s album of original songs, Lashed But Not Leashed: