Anya Grundmann ’89 recalls listening to Terry Gross on Fresh Air her senior year at Grinnell, amazed by the wondrous possibilities of conversation and connection through radio. She also remembers having no idea what she was going to do after graduation. Fast forward a few years and she is now the vice president of programming and audience development at NPR, shaping the sound of public radio for millions of listeners every day.

After graduation, Grundmann stayed for another semester to continue studying music before moving to Flagstaff, Arizona, where she joined a gaggle of Grinnellians. While studying in a master’s program for music, Grundmann passed by the local NPR affiliate on a daily basis. One day, she vowed, she would walk in there. And she did. What began as a fleeting interest evolved into a lifelong passion, and Grundmann has spent her career in public radio, often focusing on music to connect with listeners.

From her early days in Flagstaff working on a classical music program, Grundmann has worked to “connect people with great music, the ideas and issues around music, the creative experience of music, that communal connectivity that music brings to us that’s beyond the spoken realm.” She was at the helm of NPR Music when they launched into the digital realm, expanding their online platform to connect with listeners through the new medium of the internet.

Especially with the meteoric rise of podcasts, NPR is able to produce content that is useful and challenging to listeners. Grundmann firmly believes in the power of listening and conversation as a tool for understanding. Grundmann encourages listeners to “think about the spaces in between what people are saying or the spaces in the music and what the spaces do in terms of making that music really pop and be strong and the quality of the conversations when you have some space.” 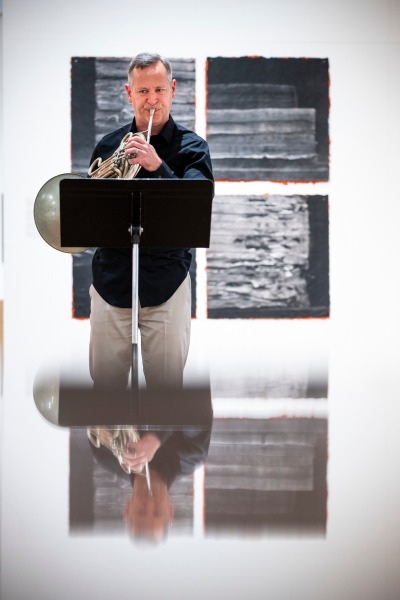 Continuing with the theme of music and connection, Eric McIntyre, professor of music, recently created a series of musical compositions in response to the exhibit on display, For Campus and Community: The Collection of the Grinnell College Museum of Art. McIntyre performed six pieces, using his primary instrument, the horn, as well as several “dangerous instruments,” which he created from found objects. Responding to the artistic ideas and feelings of the gallery, McIntyre created an auditory reflection on the visual pieces on display.

Among the works McIntyre discusses in this episode are Jean Tinguely’s “Stabilite effective,” Alexander Calder’s mobile, Tau Lewis’ “Making it work to be together while we can,” and Kara Walker’s “Harper’s Pictorial History of the Civil War (Annotated).” The compositions he created, accordingly, are “Perpetuum 3, Study 1,” “Together while we can,” and “Anodyne Scenes for horn and hornfork.”

McIntyre found the experience incredibly valuable as an artist. “These are amazing pieces of art. They’re really striking. All the ones that I dealt with, as I looked at them, I was so struck that I couldn't help but think artistic thoughts.”

Both McIntyre and Grundmann, in their own ways, encourage us to look and listen closely at the world, and the spaces in between.

Music Featured on This Episode

New music on this episode is from The Jury, an original blues and rock group of Iowans led by Kent Mick, vocalist and Grinnell High School teacher, joined by George Roby, Rick White, Steve Selzer, and William Christianson. They recently performed on Iowa Live.