When J.B. Grinnell founded the town that would bear his name, he created a prospective syllabus for a theoretical college. That hypothetical college came into existence when Iowa College transplanted from Davenport to Grinnell in 1858. At that time, the make-up of the town and College were similar in most respects. In the over 160 years since, both the town and College have transformed, sometimes together, and sometimes in different directions, but their relationship has been a fundamental element of each other’s existence.

As the College and town continue to negotiate that relationship, Dan Kaiser, emeritus professor of history, takes us through three lesser-known moments from Grinnell history which illustrate the complex and evolving nature of that relationship. Kaiser has immersed himself in the world of local Grinnell history through his blogs, Grinnell Stories and the Ricker House Chronicles.

In the 1930s and 40s, the College was struggling. Student enrollment had dropped from over 750 in 1921 to only 316 students by 1943. Due to the Great Depression and the cost of the dormitories, the College faced heavy indebtedness as well. Henry Conard, a professor at the time, wrote, “[At the College] there is increasing difficulty from year to year, which cannot go on much longer. But what can be done? The dormitories must be paid for! Of course, the Grinnell Foundation could be declared bankrupt, and the buildings sold for what they would bring — i.e., the debt repudiated, refinanced at reduced valuation, and begin over. But that would carry with it the ruin of the credit of Grinnell College.”

In the midst of these struggles, D.W. Norris, an 1892 graduate of the College and owner of the Marshalltown Times-Republican and Lennox Furnace Company, made a proposition to the College. Norris proposed that the College build a foundry and lease it to his company. The College agreed and broke ground on the foundry in October 1945. Originally included in the proposal from Norris’ company was a restrictive race covenant for the proposed housing adjacent to the foundry. The College rejected the proposal from the outset, and the plans continued without the housing restrictions.

After six years, the College sold the foundry, netting a profit of around $50,000, depending on which balance sheet you look at. The agreement served as a mutually beneficial partnership between the town and College.

From Botanical Garden to Episcopal Church 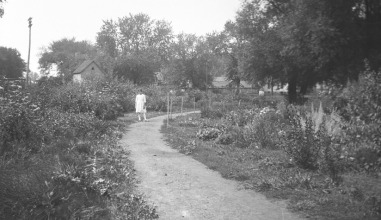 Henry Conard worked as a professor at Grinnell from 1906 to 1944. Among his many contributions to the College, Conard started a botanical garden just south of 6th Ave., on the corner of State St., where St. Paul’s Episcopal Church now stands. How did the botanical garden become a church? After Conard left Grinnell for the University of Iowa, the botanical garden faded as well. The timeline is a little murky, but as the College's struggle to increase enrollment led them to seek out a partnership with the Episcopal Diocese of Iowa.

The Episcopal Diocese of Iowa “adopted” Grinnell, gaining their bishop a seat on the board of trustees, and providing the College with a boost in enrollment of Episcopal students. The College catered to the needs of those students, seeking to support their religious activities and provide them with spaces to convene, including for more informal gatherings like radio hour. Eventually, the botanical garden gave way to a church, seemingly without much fanfare, and the property was eventually deeded to the Episcopal Diocese of Iowa in 1858.

From the College’s point of view, their partnership with the Episcopal church helped buoy their enrollment during difficult times. The Episcopal Diocese benefited by re-establishing a foothold in Grinnell, where the former St. Paul’s parish had languished for many years.

During World War II, on Feb. 19, 1942, President Franklin Roosevelt issued Executive Order 9066, which led to the forced relocation and internment of approximately 120,000 Japanese (including U.S. born Japanese Americans) from the West Coast to “relocation centers.” Joseph Conard ’35 petitioned Grinnell College to accept a number of college students who would otherwise have been forcibly relocated. About a dozen such students eventually came to Grinnell, including Barbara Takahashi ’46, who stayed and graduated from the College.

The students found Grinnell to be an uneasy transition in many respects. For some, the small size was a shock after living in Los Angeles. For others, they felt alienated by the reception from locals, especially farmers who would come into town on weekends. But even for those who transferred from Grinnell, they were grateful for their time spent at Grinnell, and many viewed the campus as a refuge of sorts during a time of turbulence in this country.

In response to the Iowa legislature’s consideration of the Findlay resolution, which sought to deny Japanese American youths from “securing an education in American colleges and universities, while the same privilege is denied to loyal American young men called to military service,” and proposed that “if any Japanese American youths have already been given the privilege of attending colleges and universities, they be returned to their relocation campus.” The Scarlet and Black issued an editorial condemning the legislation, writing, “to be brief, it makes us sick.”

Through all these events, we can see how the College and town have navigated their relationship, often in mutually beneficial ways, but sometimes with a great deal of tension.