Voting Rights: Devil in the Details

Doug Hess ’91, assistant professor of political science, has researched the National Voter Registration Act (NVRA) basically since it was passed by Congress in 1993. The law was intended to advance voting rights in the United States by requiring states to incorporate registration opportunities into the application process for a motor vehicle license and many types of public assistance, among other requirements. The law also prevents states from removing registered voters from the voting rolls unless certain criteria are met. States were supposed to implement the law by 1995, but as we enter 2020, many aspects of the policy have stalled or been neglected. Implementation has lagged for various reasons, from administrative barriers to voter suppression efforts. Because of this, Hess continues to research and monitor the implementation of the legislation throughout the United States.

Perhaps the most recognizable section of the legislation is “motor voter,” which allows voters to register anytime they apply for or renew a driver's license or state ID. But, Hess says, “there were also other parts of the law that don't get as much attention.” For instance, states are required to have registration deadlines of less than 30 days before elections. States are also supposed to ask about and provide assistance for voter registration in programs serving people with disabilities or low incomes. Those other elements of the legislation are essential for targeting populations that are statistically less likely to register to vote, which concerns Hess.

“There's nothing wrong with helping anybody to register, but if you ignore those communities that are least registered, you might make the gap bigger,” he says.

That's why the other avenues for registration provided by the NVRA are important: “motor voter” doesn't capture all potential voters. And some states have even stopped fulfilling those requirements of the legislation.

Hess calls the NVRA the “most often ignored federal election statute.” The reasons for unsuccessful implementation vary widely, from politically motivated voter suppression efforts to administrative difficulties, including communication between departments that don't otherwise work together.

While frustrating, the status of the NVRA is understandable, Hess says, “in part because it's a tricky law to implement. It's very technical, and it brings up a lot of controversies almost anytime we talk about this... It's a bit of a hot button issue.”

With so many states thwarting or ignoring the legislation, various lawsuits have been filed and won against states for failure to implement the law. In the wake of those lawsuits, states “will start off really following them quite well,” says Greg Eastman '19, who worked with Hess on this research. “And then they'll just stop following it or their effort will go down a lot.”

Eastman and Takshil Sachdev '19 are part of Hess' group of student researchers who have been working to compile a huge database of monthly registration figures for about a dozen states at the county level.

With implementation still lagging throughout the country, their research is essential for keeping states accountable. As Hess says, “We're the only people who have that data really. And so that makes us sort of the national experts on that topic.”

Although the act might not be front of mind for many states, policymakers, or voters, Sachdev believes in the enormous potential of the legislation.

Read: Doug Hess’ website with research on the NVRA and other issues. 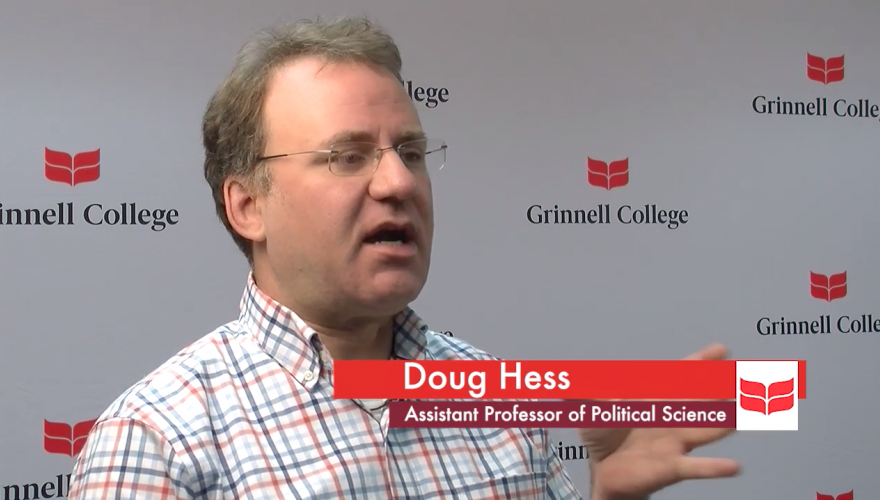 Voter registration policy obviously impacts the number of people who are likely to vote, but so too, does election security. At least that’s what responses from the Grinnell College National Poll suggest. As Hess explains, “there’s some concern that elections are being stolen, that there are fraudulent votes, or non-citizens are voting, or voting machines have been hacked.” The poll asked citizens about their confidence in recent and upcoming elections, and the correlation between those responses and their likelihood of voting in elections was notable.

“And this could matter for turnout,” according to Hess. “If you think the election is somehow rigged, or fixed, or there’s cheating going on, you might not participate. So we know that of people who say they will definitely vote, 71% are very or somewhat confident [in elections]. But for those who are not certain about voting in 2020, only about or 54-55% say they’re very confident or somewhat confident in elections. So that could be an association there one way or the other between confidence in vote count and turn out.”

Although the frequency of actual voter fraud remains incredibly rare, according to Hess, claims of election fraud have shown potential to decrease voters’ confidence, and in turn participation, in elections.