The Grinnell Singers are a group of people who are highly diverse in terms of their backgrounds, interests, and talents, but who are united in their love of singing and their dedication to the choral art. They perform music from a wide variety of traditions and locales — from Brahms to bluegrass, from Renaissance England to twenty-first-century New York. They work hard to craft the very best musical performances together, and as they pursue these high ideals, they are committed to fostering an environment that is welcoming and supportive for each and every member. In addition to their musical work, the ensemble regularly contributes to the community in the form of volunteer projects.

Each year, the Grinnell Singers complete a concert tour during the first week of spring recess. This year, they are traveling to Central Europe for an 11-day, seven-concert tour. Among the exciting features of this trip are the ways in which the singers will be collaborating with Czech, Slovak, and Hungarian musicians. Numerous Czech choral singers will be joining us to sing the Mozart Requiem. Music will truly be a bridge that fosters special connections between people who are widely separated by geography and culture. The tour also has official endorsement and support from the American Embassies in the cities we are visiting. The Grinnell Singers will perform three concerts of Mozart’s Requeim and John Rommereim’s Convivencia  with professional orchestra and soloists, and three additional concerts that highlight aspects of American music. The choir’s performance at Bratislava’s RTV Auditorium will be a benefit concert for the Slovak Cancer Society. Here is a list of the choir’s appearances:

In past years, the Grinnell Singers have completed tours to Finland, Estonia, Russia, the Czech Republic, Romania, Bulgaria, and Turkey. Their 2012 tour took them into Canada, with concerts in Chicago, Ann Arbor, Toronto, and Montreal, culminating in a concert at Boston University, and in 2013, they traveled to California, with concerts all along the coast, from San Francisco to San Diego.

We kicked off the fall season with our annual retreat at CERA, the College’s nature preserve. We had a great time out in the country playing some games, hiking, brainstorming, discussing our plans for the year, and, of course, singing. In December, we performed a very special concert of Craig Hella Johnson’s oratorio, Considering Matthew Shepard. This was such a powerful event; we had numerous people who reported to us that it was the most significant choral concert they have ever attended. One audience member even was moved to write several beautiful poems in tribute to the concert. “Considering Matthew Shepard” has quickly become one of the country’s most treasured choral works since its premiere in 2016. The work centers on the shocking story of Shepard, a University of Wyoming student who in 1998 was beaten and left for dead for being gay. At that time, Johnson was profoundly affected by the news of Shepard’s death, as were so many were others worldwide. Yet his artistic response took many years to develop, as he contemplated and processed this deeply troubling story.  Eighteen years later, Johnson finished composing what Jason Marsden, executive director of the Matthew Shepard Foundation, called, “By far the most intricate, beautiful and unyielding artistic response to this notorious anti-gay hate crime.” Here is a recording of the final movement from our concert.

In March, we pursued an exciting collaboration with the Lyra Baroque Orchestra from the Twin Cities. Together with this professional period-instrument ensemble, we presented three performances of Handel’s Dixit Dominus (click for recording) and J. S. Bach’s Mass in A Major in Grinnell and in St. Paul and Rochester Minnesota. One of our most illustrious musical alumni, Thomas Meglioranza ’92, joined us as baritone soloist for these concerts. This is the third time that the Grinnell Singers have teamed up with the Lyra Baroque Orchestra. Our 2017 concerts, under the direction of guest conductor Simon Carrington, were hailed as “superbly nimble and confident” by the Rochester Post-Bulletin. Our first collaboration in 2015, on Handel’s Esther was also very successful. (Here’s a recording of Rosie O’Brien ’16, soprano soloist with the orchestra from our concert). We are so pleased to have this ongoing relationship with this fine ensemble, and their musical director, Jacques Ogg.

Following our Twin-Cities concerts with the Lyra Baroque Orchestra during the first two days of spring break, we continued on the road, performing concerts on our own on our spring-break tour, with performances in Madison, Wisconsin; Chicago, Illinois; and Newton, Iowa.

The Grinnell Singers performing “All of Us” in collaboration with the choir of First Presbyterian Church in Newton, Iowa

Finally, the year culminated with a splendid performance of Mozart’s Grand Mass in C Minor in collaboration with the Grinnell Orchestra and the Grinnell Oratorio Society. It was a year filled with great variety that included no less than four major works (Considering Matthew Shepard, Bach’s Mass in A Major, Handel’s Dixit Dominus, and Mozart’s Grand Mass in C Minor.) The choir was noticeably quicker at learning new music by the end of the year after all of this intense music-making.

We started of the year by loading up a school bus and heading out to the CERA prairie for a retreat. It was a great way to start to build a team and for the new folks to get to get acquainted with the “old” folks.

One special project we pursued in 2017–18 was our collaboration with the Al-Bustan Takht ensemble, a professional group from Philadelphia who are steeped in Arab musical traditions. This project offered us an opportunity for substantial engagement with Arabic music and poetry. The collaborative concert consisted of music that combines Arab musical traditions with Western choral and instrumental traditions. Composer Kareem Roustom visited Grinnell in the fall to work with the choir, meet with student composers, and to give the Grinnell musicians a sense of the musical tradition. The composer Kinan Abou-afach also visited in February to work with the choir, and the Al Bustan Takht Ensemble then came to Grinnell for three days to rehearse and perform with the Grinnell Singers in late February of 2018.

Another exciting project we pursued was the performance of Caroline Shaw’s recent work, To the Hands. Caroline Shaw is the youngest recipient of the Pulitzer Prize in music — and the only woman to ever receive that award. Her piece focuses on the issues of refugee resettlement and homelessness. Rather than charging a fee for the performance materials, Shaw provides them for free with the strict stipulation that the ensemble must make funding efforts to contribute toward the resolution of these problems. The musical work uses phrases from the poem inscribed in the Statue of Liberty and holds them up to the listener as a provocative challenge. We performed in a special fundraising event in Marshalltown to benefit Immigrant Allies of Marshalltown. We also raised money at our regular concerts to benefit Lutheran Immigrant Services and Immigrant Allies of Marshalltown. Here is a recording of our performance of “To the Hands” in Dallas, while on tour in March.

We completed a tour to New Orleans, with concerts in Des Moines, Lawrence, Kansas City, Tulsa, Dallas, and New Orleans. In April, following our tour, Anthony Fu ’19 worked with the choir as part of his Mentored Advanced Project in choral conducting. Anthony conducted the choir at each of the tour concerts, and in May, he conducted the choir in a short concert of “Aesop’s Fables” by Bob Chilcott. Here’s a video of Anthony Fu ’19 conducting the choir on Brahms’s “O schöne Nacht.”

The Grinnell Singers had an action-packed year in 2016–17.

One highlight came in March when our tour performance with the Lyra Baroque Orchestra was hailed as “superbly nimble and confident” in a Rochester Post-Bulletin Newspaper review. The ensemble participated in a two-week residency with the renowned conductor Simon Carrington (founding member of the King’s Singers and professor emeritus at Yale), who conducted the group together with the Lyra Baroque Orchestra, a professional period-instrument ensemble based in the Twin Cities. This was the second collaboration with this outstanding ensemble, and it was so successful that we have established a regular relationship with the group, and we are looking forward to another collaboration with them in 2019.

Over the course of the year, the Grinnell Singers also participated in a performance of Handel’s Messiah, and the German Requiem of Johannes Brahms — two of the most celebrated choral/orchestral works in the repertoire. A rich and rewarding year of choral music.

The Singers have produced two recordings:

They have been honored with two ACDA convention invitations.

The ensemble regularly performs works by its members, and a number of students in the ensemble have gone on to careers as composers. We were proud to see that works by Grinnell Singers alum Jisoo Ben Kim ’08, for example, was performed by the Los Angeles Master Chorale. The performance by this world-class choir was facilitated by the fact that the Grinnell Singers had taken the time and effort to record these works, which helped them to be published — which in turn brought them to the attention of the LA Master Chorale.

Each year, we have a composition contest to provide Grinnell students the opportunity to have their music performed by the choir.

In addition, in previous years the ensemble has commissioned several major composers. In 2006, the Singers commissioned an extended work from the 2005 Pulitzer Award winner, Steven Stucky in a consortium with the Kansas City Chorale, the Phoenix Bach Choir, and Seattle Pro Musica.

The Grinnell Singers’ 2012 season featured the premiere of a commissioned work, “Anything Can Happen,” by Mohammed Fairouz (sample of 3rd movement from Fairouz’s “Anything Can Happen”). In pursuing this project, the ensemble formed a consortium with three of the country's most distinguished choirs: the Back Bay Chorale and the Marsh Chapel Choir of Boston, Scott Jarrett, Conductor, and Cantori New York, Mark Shapiro, Conductor. Through these commissioning projects, the Grinnell Singers are playing a role in advancing the choral art in the twenty-first century. 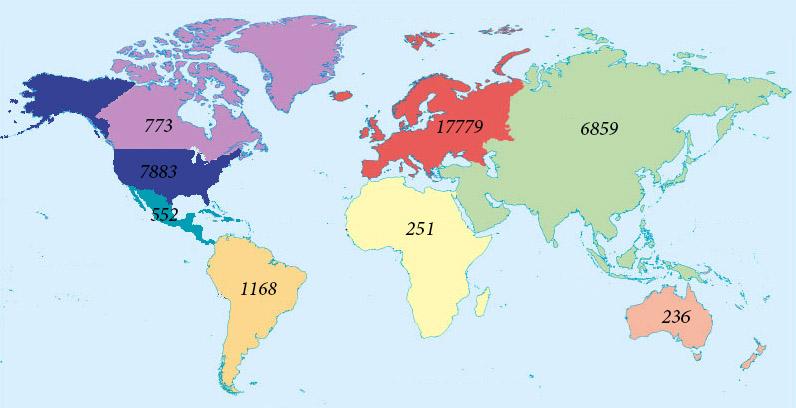 The Grinnell Singers have had a total of 35,788 views worldwide. It is fun to see where our fans are; watch our video and share it with a friend!