While 85% of Americans believe it is very important the United States remain a democracy, 52% believe American democracy is facing a “major threat” according to the newest edition of the Grinnell College National Poll (Grinnell-Selzer). The results of the poll, taken Oct. 13-17, 2021 by Selzer & Company on behalf of Grinnell College, were released on Wednesday, Oct. 20, 2021.

“The sense that democracy is under threat is characterized by deep, partisan polarization, with Republicans rather than Democrats describing our democracy as facing a ‘major’ threat,” said Danielle Lussier, Grinnell associate professor of political science. “It appears as though baseless accounts of fraud and a stolen 2020 election have sharply eroded confidence in our system among Republicans and created a sense that democracy is facing a crisis.”

One in four of both those under the age of 35 and those identifying as non-white indicate remaining a democracy is only fairly, somewhat, or not at all important. 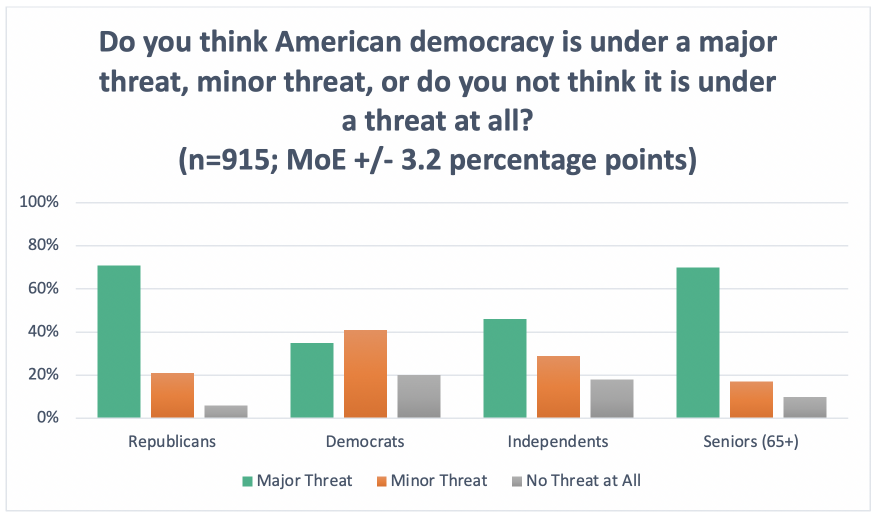 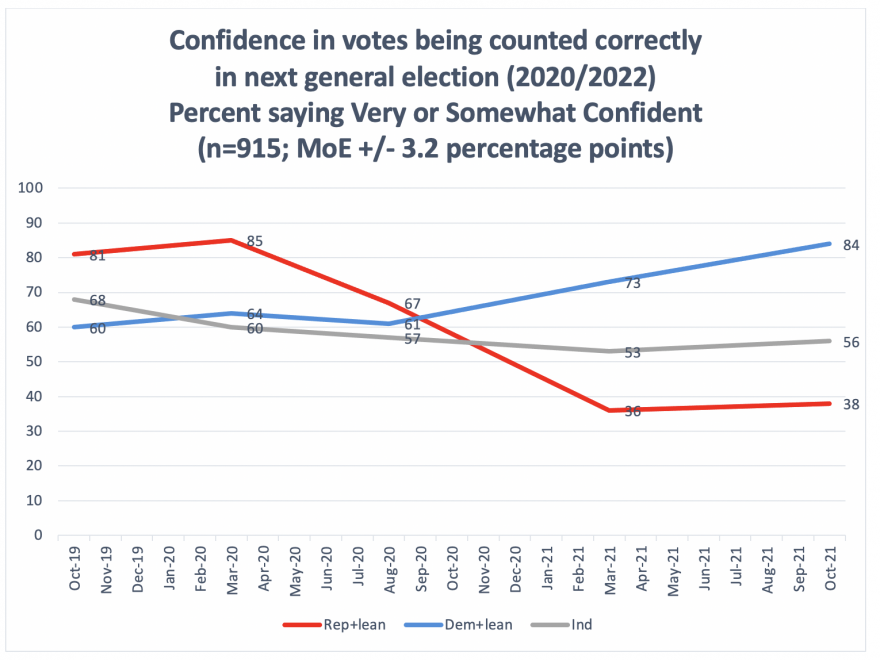 Republicans Not as Confident as Democrats Votes Will be Counted Correctly

Overall, 58% of Americans say they are very or somewhat confident votes in 2022 will be counted as voters intended. With legislation enacting changes to voting laws happening within mostly Republican-led states, the confidence of Republicans in the voting process remains low at 38%. This is a small increase from March 2021 (36%) but a 47-point decline from its level in March 2020. Interestingly, the confidence Democrats have in the system stands at 84% – an increase of 11 percentage points from March 2021 and the highest level measured by the Grinnell-Selzer poll.

"Republicans and Democrats have different views about the integrity of American elections, with a strong majority of Republicans already skeptical about the validity of the vote count for the 2022 midterm elections," Lussier said. “By contrast, Democratic confidence in the vote stands at an all-time high for our poll at 84 percent."

Severe Lack of Trust Impacts the Health of Democracy

Americans were somewhat more likely to have high trust in state governors (25%) and city or country elected leaders (19%) to offer good ideas to solve problems in their communities. In both cases, only a minority of Americans had high trust in elected officials.

“Trust in political institutions is the glue that holds democracies together and allows them to weather crises over time,” Lussier said. “While there will always be some skepticism toward the government, when a majority of people express distrust in elected officials, the legitimacy of the constitutional order is called into question.” 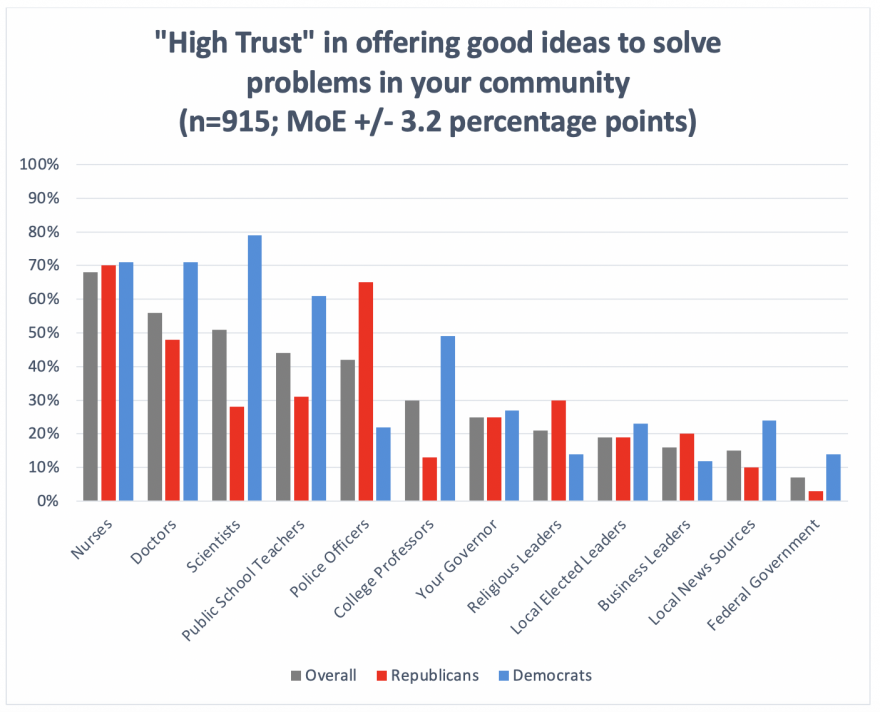 Democrats and Republicans trust different groups to offer good ideas to solve problems in their communities and differ in how many groups they trust.

At the other end of the scale, those receiving low trust marks also vary by political affiliation. Large proportions of Republicans report low trust in the federal government (76%), local news sources (59%) and college or university professors (49%). By contrast, a majority of Democrats did not place any of those groups or individuals in a low trust category.

"Americans lack a collective sense of whom to trust to solve problems facing their communities,” Lussier said. “Republicans show a high trust in police, while Democrats trust teachers, doctors, and scientists. The fact that Americans can’t agree on who is deserving of trust helps to explain why it is so hard to build a consensus for solving the country’s problems.”

The issue of trust also presents itself when looking at the kind of people Americans would choose for elected office. Almost two in three Americans (64%) agree that ordinary people elected to office would do a better job of governing than professional politicians, with 51% of Republicans strongly agreeing. However, only 17% of Democrats agree with that same statement.

The widening division within the country is further evidenced by the value placed on individual liberties – activities Americans feel they should be “absolutely free to do.”

Among a key set of issues, Democrats and Republicans had sharply different views on the kinds of freedoms Americans should have.

Activities that a majority of Republicans feel they should be absolutely free to do include refusing vaccines (78%), punishing their children in the way they think is best (67%), openly carrying a gun wherever and whenever they want (58%) and being exempt from rules and regulations that conflict with sincerely held religious beliefs (55%).

A majority of Democrats believe people should be able to get an abortion during the first 15 weeks of pregnancy (82%), use marijuana recreationally, whether it’s legal or not (65%) and join a public protest that blocks city streets (61%).

Majorities of Democrats and Republicans agreed upon the importance of freedom of speech and the right of Americans to become as wealthy as possible, and supported laws requiring seatbelt use, regulating smoking, and prohibiting harming others.

"Americans care about their freedoms, but what Democrats and Republicans see as liberty is quite different,” Lussier said. “Democrats value the freedom to get an abortion, use recreational marijuana, and engage in public protest, while Republicans value the freedom to refuse vaccines, carry a firearm, punish children as they see fit, and seek religious exemptions from the law. Both sides appear to see freedom in narrow, partisan terms rather than through a lens of broadly shared individual rights." 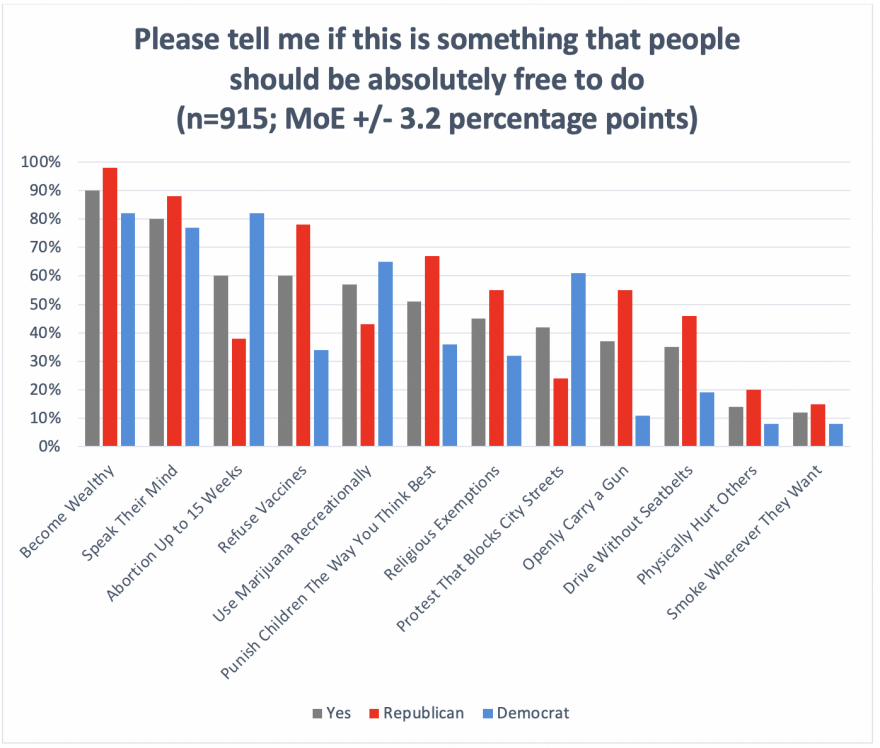