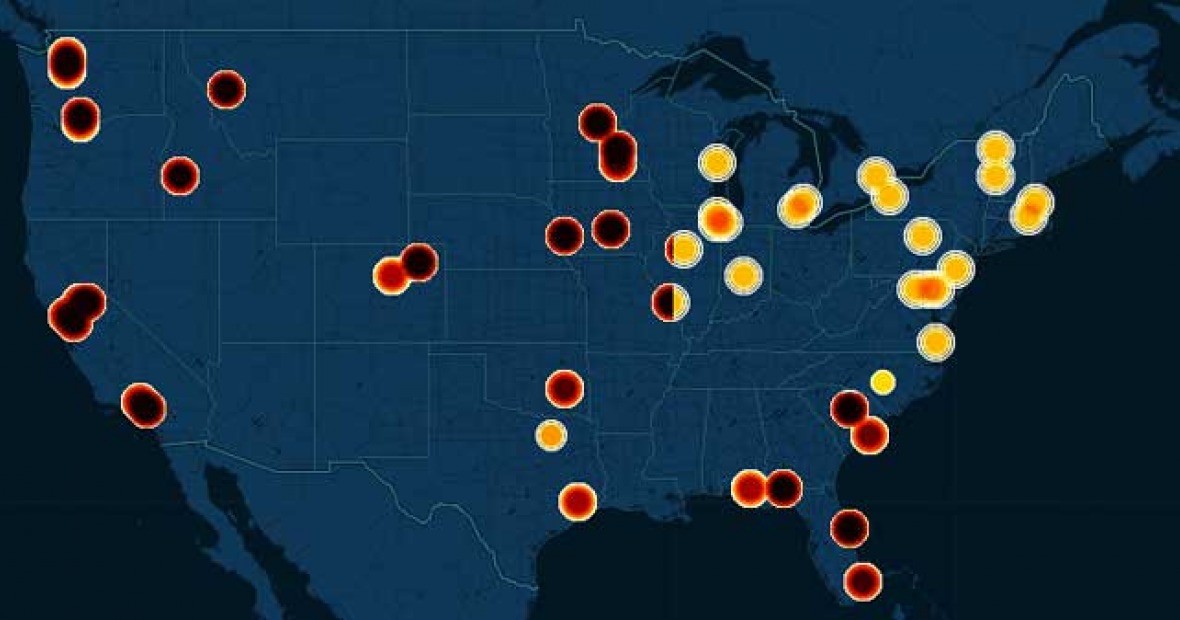 In late January 2017, Caleb Elfenbein, associate professor of history and religious studies and director of the Center for the Humanities, publicly unveiled a project that he had been working on, arguably, since his days as a graduate student: the timely and innovative digital humanities project Mapping Islamophobia. The project saw Elfenbein working in collaboration with the Digital Liberal Arts Collaborative and students Chloe Briney ’17 and Julia Schafer ’18.

Using a series of maps, Mapping Islamophobia visualizes incidents of violence against Muslims in America. The presentation of the data behind these incidents not only shines “light on the continuing presence of Islamophobia in our communities,” but also “empowers viewers to develop their own understanding of Islamophobia in the United States.”

Mapping Islamophobia owes its existence to a happy confluence of events from the spring of 2016. Elfenbein offered a new course, Being Muslim in America, which explored the participation, or lack thereof, of Muslims in American public life. Both Briney and Schafer were in this class, which, according to Schafer, “changed my trajectory at Grinnell pretty drastically.” And for Elfenbein, students’ final projects — like Schafer’s, which incorporated digital humanities tools and methods to engage with social media and other forms of digital dissemination — presented him with the opportunity of “seeing what projects could do, not just in presenting information in interesting ways, but also making novel analysis possible.”

Spring 2016 also saw the arrival on campus of Roopika Risam, assistant professor of English at Salem State University, who led a workshop entitled “Digital Humanities Pedagogies for Social Justice.” One of the projects Risam showcased, Mapping Police Violence, “clicked” for Elfenbein, and he began to put together the pieces of creating digital public scholarship that could meaningfully engage with the conditions of public life for Muslims in America.

Professors at Grinnell have long engaged in sharing their expertise with the public. Recently, David Cook-Martin penned a piece for The Conversation entitled “Why Trump’s wall with Mexico is so popular, and why it won’t work.” Shannon M. Hinsa-Leasure’s research into how copper equipment may reduce infections in hospitals was featured in the New York Times. However, Mapping Islamophobia is unique, as it is our first digitally born public scholarship project, deliberately conceived to take advantage of the affordances of digital media to present and disseminate information.

With the support of alumni-funded internal grants, over the fall of 2016, Elfenbein and Briney identified a broad range of Islamophobic incidents, recording and ultimately visualizing the data. “Reading news reports and collaborating with professor Elfenbein on categorizing and analyzing the effects of these events has definitely continued to shape my outlook on American inclusion of Muslims,” says Briney. “I look forward to being able to share what I've learned with others at Grinnell and beyond." Thanks to the continued generosity of alumni gifts, the work has continued with Schafer, with the possibility of adding four more students this summer.

The release of Mapping Islamophobia has already seen enthusiastic responses. As Elfenbein recognizes, “this kind of project generates excitement.” As soon as the project was posted, Elfenbein was contacted by nonprofits, media firms, and advocacy organizations, “and they were tweeting about the work and sharing with people and introducing me to scholars and activists, all involved in advocating in one way or another for American Muslims and American Muslim communities.” Ultimately, Elfenbein said, Mapping Islamophobia “will bring me to places that I can’t imagine right now. And that’s pretty exciting.”